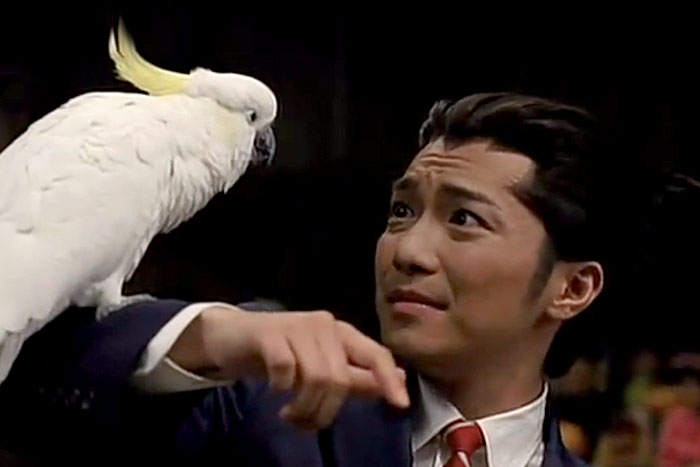 Thanks to Madman we had the chance to see Takashi Miike’s Ace Attorney on DVD, a movie based on the popular series of visual novels and adventure games, created by Shu Takumi and published by Capcom. Ace Attorney follows Phoenix Wright (Hiroki Narimiya), a rookie lawyer who must face a highly experienced prosecutor, Miles Edgeworth (Takumi Saitô) who has a flawless record of victories in court, while representing Maya Fey (Mirei Kiritani) within a legal system which only allows 3 days of trial before the judge makes a decision.

After Maya’s trial, Phoenix finds out that his friend and rival Edgeworth has been arrested for murder, so he decides to defend him in court. But a major surprise comes in the form of news that his opponent is none other than a legendary prosecutor who has never lost a court case in over 40 years: Manfred von Karma (Ryo Ishibashi). Ace Attorney is a peculiar and risky film based on a popular adventure game known in Japan as Gyakuten Saiban, originally released for Game Boy Advance, and later for Nintendo DS. In the game, players must collect evidence to present to witnesses in court. The risk was in pulling together a movie faithful to a game that is not simple to play, since it lacks a specific pattern, and because results can vary among players. Fortunately, the always fantastic Takashi Miike was behind the camera and up to the challenge, delivering a clever film with complex characters, a fantastic cast and some iconic moments from the game perfectly recreated for the enjoyment of many fans. The cast is perfect, with Hiroki Narimiya absolutely taking over the role of Phoenix; and, yes, you will see him screaming “HOLD IT!” and “OBJECTION!” while in court (helped by fantastic make-up and costume design that make him look exactly as he does in the game). The same care was taken in Takumi Saitô‘s authentic portrayal of Miles and Mirei Kiritani’s turn as Maya. The story and the action during the film are sufficiently complex to keep you stuck in front of the TV trying to decrypt the clues yourself. Sometimes, however, there if far too much info to process and you may find yourself becoming confused. However, be aware that there are a couple of major twists in the plot and if you have never played the game, you might get a surprise at the end of the case.

Special effects are perfect for a film like this. In the courtroom, the lawyers can use holographic technology while presenting their cases, literally throwing evidence to opponents, or scanning evidence in real-time, a super-fun feature that makes the court scenes 100% anime/video game in style. Overall, Ace Attorney is one of the most loyal video game adaptations to a live action film ever made. And it’s a film that not only captivates the attention of gamers, but the entire family as well, thanks to a pitch-perfect script and a world-class cast that is able to faithfully bring each of the game’s characters to life.

Ace Attorney is now available on DVD in Australia from Madman.
Get your copy here