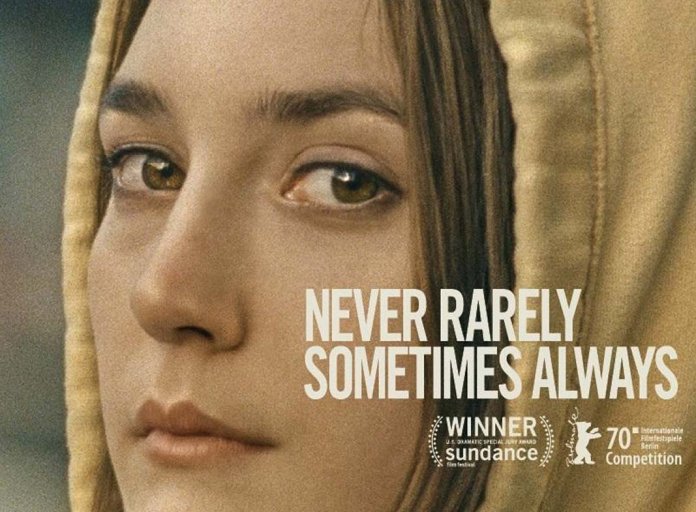 Never, Rarely, Sometimes, Always is the latest film from Eliza Hittman, which follows the journey of Autumn (Sidney Flanigan), who, upon learning of her pregnancy, sets out with her cousin, Skylar (Talia Ryder), to travel to New York to conceal the pregnancy from her parents, as her home town of Pennsylvania requires parental consent to minors seeking an abortion. With very little money, the two tackle the big city and all the unexpected hurdles thrown at them, with on the fly decision-making that feels so believable and relatable to anyone that was once a teenage girl.

What makes this so natural really comes down to the performances, and the films embrace of silence, which offers a strong narrative to all the subtle facial expression and physical performance that the two characters offer. From their weariness of accepting assistance or asking for help, to the quiet repulsion they express to the non-consensual male advances they receive, this film conjures up so many familiar emotions and natural responses.  Yet the unwavering bond the two girls share in the midst of all this is a heartwarming tale of female friendship in times of need. 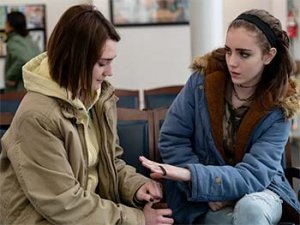 This is a simply story that does not try to explain the importance of choice, nor does it offer any resolutions to the toxic masculinity at play, or veer off into a narrative of danger as the two young leads navigate their way through the city that never sleep. The precariousness of youth is not presented in a melodramatic way at all, rather we are presented with a slice of a young girls life, in the most realistic way, capturing the essence of youth, and the little intricacies young women face in daily life. What you see are two strong female leads on a journey, pushing through the obstacles in their path, to get to the one goal they have in mind.

Shot on film, cinematographer Hélène Louvart has captured the beauty and intimate nature of the film, with many close up shots, even when in such a large city as New York, we are held within the close confines of two young girls, living in their world, in the moment. Writer and director Eliza Hittman captures this even more with her lack of explanation, allowing her characters to have a much more prominent and meaningful journey, which is the markings of an exquisite film and a remarkable director. The two young leads, Sidney Flanigan and Talia Ryder, may have little dialogue between each other, but their quiet performances say so much in feeling, they really make you appreciate how incredible young women are when burdened with so much.

This is a stellar film that needs to be seen. Not just because it’s a refreshing narrative away from continual debate over women’s bodies, where anti-abortion protests can catch the attention of politicians in the US and elsewhere, or where countries like Poland can pass an abortion law in the midst of a pandemic. It simply is a film that does not force ideas on you, but rather presents you with reality, and what the world is like for a young girl entering adulthood. Slow paced and beautifully shot, this slice of life film is sure to stir emotions inside of you.