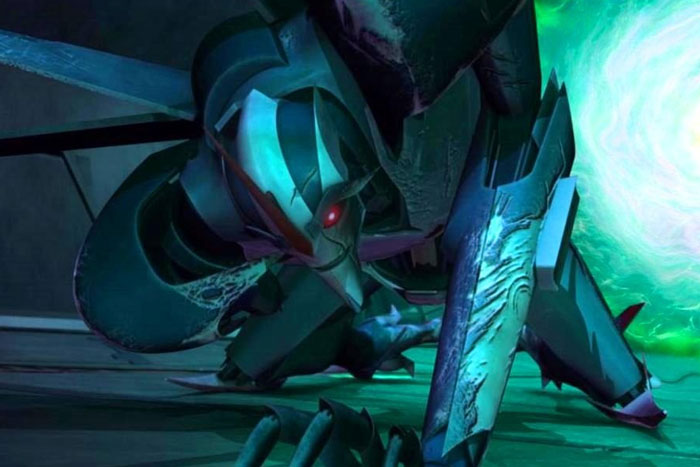 By Skyjoker
Thanks to Madman, we had the chance to see Volume 3 of the Transformers Prime saga called Alien Threat on DVD.

Alien Threat follows the events from Vol. 2 Unfamiliar Enemies, but dismissing the human enemies introduced on the last episode, the bots are faced with new difficulties alongside their human friends, one of which has them getting involved in some underground races in order to help Jack  get the attention of a girl (don’t worry that episode is not as bad as it sounds).

The Decepticons are still under the command of Starscream, who once again tackle the impossible of trying to stop Megatron from being revived after the energon explosion from Vol. 1, which caused him to stop functioning. Starscream continues struggling with his new role in order to take over Earth and eliminate the Autobots.

Arcee on the other hand, must face her fears and her biggest enemy in the episode ‘Predatory’, when during a routine patrol with Jack, she finds a crashed spaceship from an old enemy who is on Earth to hunt some native species.

Perhaps the best and the most twisted episode of this volume is ‘Sick Mind’, because Optimus Prime puts his life in danger when getting infected by a virus created by Megatron, which doesn`t have any known cure, and the only answer to save Prime is on Megatron’s mind, reason enough for Arcee and Bumblebee to crash the deceptions ship and connect Bee to Megatron in order to explore his mind and find the formula to save Optimus, something that will bring serious consequences for both sides, including the resurrection of the leader of the Decepticons. There is not much we can say about this volume that we haven`t said before, because the amazing animation remains the same and the plot continues on the same line, with the bots as the stars of the show (including a couple of new beloved characters making their debut on the series) and the humans as secondary in a very decorative place; still sometimes we would love to see Miko crushed by a Decepticon.

Unfortunately this volume doesn`t bring any extras related to the show, and only includes some trailers from other upcoming and current releases. Madman brings Transformers Prime: Alien Threat to Australia on DVD, another worthwhile instalment to complete your Transformers collection (or starting one!)

Transformers Prime: Alien Threat is available now on DVD thanks to Madman