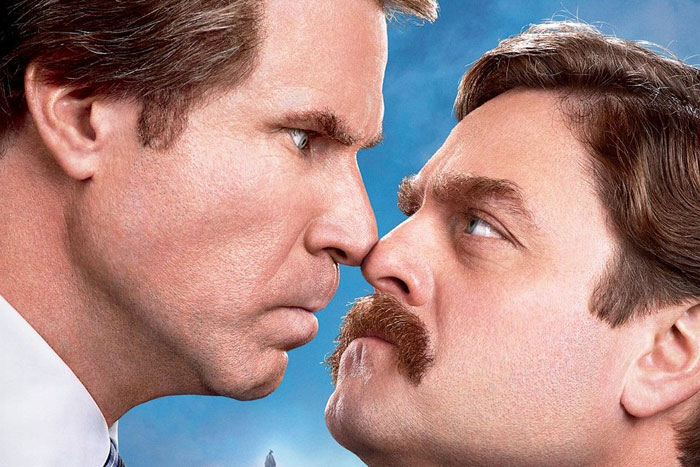 Thanks to Roadshow Films, we had the chance to see director Jay Roach’s new comedy The Campaign at the Australian premiere of the film. This is our review of the film – but as usual – no matter what we say; we recommend that you still go to your local cinema and see the film because: There is no better critic than yourself! The Campaign is a political satire comedy following the story of long-term congressman Cam Brady (Will Ferrell) and his naive contender for Congress Marty Huggins (Zach Galifianakis) to represent North Carolina, involving some dirty tricks to climb the polls.

The film seems to be a bullet-proof formula starring two world-class comedians like Ferrell and Galifianakis plus the director of ‘Meet the Parents’ and ‘Meet the Fockers‘. However, it misses its horizon and falls in typical predictable jokes such as about dogs, communism and of course Will Ferrell showing his hairy chest. Will Ferrell plays the same kind of role he always does so 10 minutes into the movie, you already know what you will seeing (yep he screams and curses as usual too) in the next hour or so. He is an extrovert corrupted congressman who wants to be re-elected no matter what to keep enjoying his wealthy carefree life which is where his character ends. In fact, we think his gags imitating George W. Bush on Saturday Night Live are ten times funnier than his part in this movie (or the whole movie actually!)

Galifianakis on the other hand, is an innocent tourist guide (yep, once again he’s playing a naive character) who has been pushed and manipulated by his father and two corrupted entrepreneurs to start his political career against Brady to get commercial gain for the Motch Brothers (John Lithgow and Dan Aykroyd) business ventures. But if you think Ferrell is predictable, Galifianakis is worse because his character is always a mix of Allan in The Hangover and Stu in Due Date (he even has 2 little Pug dogs as part of his comedy repertory so don`t expect anything new from him) Probably the only notable thing is when Ferrell and Galifianakis interacts because they have chemistry as political enemies which mightamuse you from time to time. Furthermore, funnyman Jason Sudeikis is also in the film but his value is kind of lost as he plays a serious character as Brady’s political campaign manager.

Thus, the film is like Huggins’ campaign slogan “It’s a mess!” with a script that goes nowhere. It should focus on each candidate’s plan to take down their opponent instead of trying to find redemption and see who wins in the end, because seriously, no body cares! The premise of the film was “may the best loser win” and we wanted to see more of that!

Overall, The Campaign is just another comedy attempt with repetitive characters, same old jokes and a predictable ending but thanks to the two titans in comedy, it still manages to make you laugh sometimes despite the very average script.

The Campaign opens on 9 August 2012 from Roadshow.