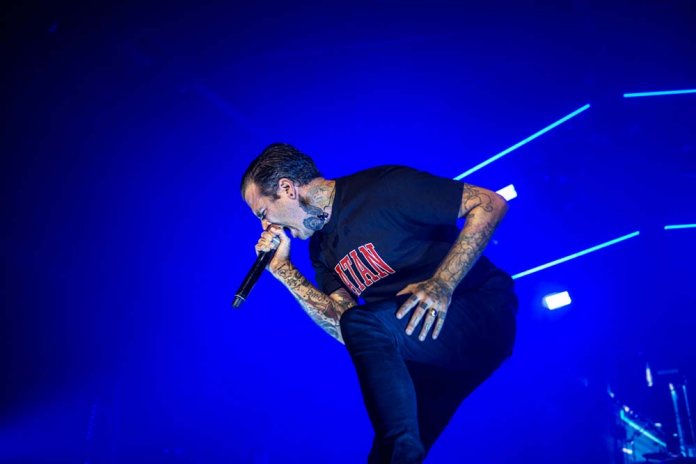 Last night was epic! That’s the way I want to start this review. If you missed it mate, let me tell you that it’s too late, probably your friends already told you how great it was and there is a possibility you still think they are breaking your balls because you decided to stay at home instead of coming to the show (wrong decision!). Unfortunately for you, if you continue reading this you will realise that I’m confirming word by word what your friends already told you, and you have seen on instagram. Yeah, that’s right, the thousands of people who were there last night don’t have a common plan to fool you. It was epic… I think already said that, but it’s true, it was epic!

Pagan was the first band. Obviously they did this ugly job because it was Thursday and I guess you are not expecting the tsunami (musically speaking) that was coming toward us. Anyway, they jumped on the stage with confidence and their vocalist Nikki Brumen drove the show proving why they deserve a place in such a show. Pagan are getting bigger and bigger and I’m pretty sure we’ll see and hear more about them in the near future. Keep your eyes open.

After Pagan we were fully aware where we were and before we could catch our breath Crossfaith took the stage and…. hold on, hold on HOLD ON!!! Those guys have a high voltage perfect synchronised show, and call me a fool, or call me whatever you want but they were the real winners of the night. Don’t get me wrong, the headliners were like a freight train but Crossfaith after a few songs had the whole pavilion jumping and singing every song, and to be honest, I’m not a big fan of the electronic vibe but those guys know how to rock and I have no doubt we’ll see them at future festivals. Note that already our t-shirts are complete sweaty and it’s just the middle of the show.

Underoath were up next and they were there to make their presence felt, and sure they made an effort because they delivered a bunch of good songs, they played with attitude but to be fair, I was still in shock of what I was witnessed before.

Then, after a 30 minutes break The Amity Affliction came to the stage ready to deliver a full energy hard core metal show. They have a big fan base that didn’t miss the opportunity to be there supporting their favorite band. Since the band was formed in 2003 they’ve been adding more fans and they definitely have room to grow more because this band work hard, and record after record we’ve seen how their sound gets stronger, and more compact.

They acted like the heavyweight title holder, knowing exactly what to do in front of thousands of fans, aware that every one was there because of them, and they didn’t fail. Song after song the level was really high and we didn’t stop head banging, singing and doing what we were supposed to do, enjoying the show to the fullest.
As I said at the start of my review if you chose to stay at home you clearly chose the wrong day to do it. But let me tell you something, they will be back, that’s for sure.