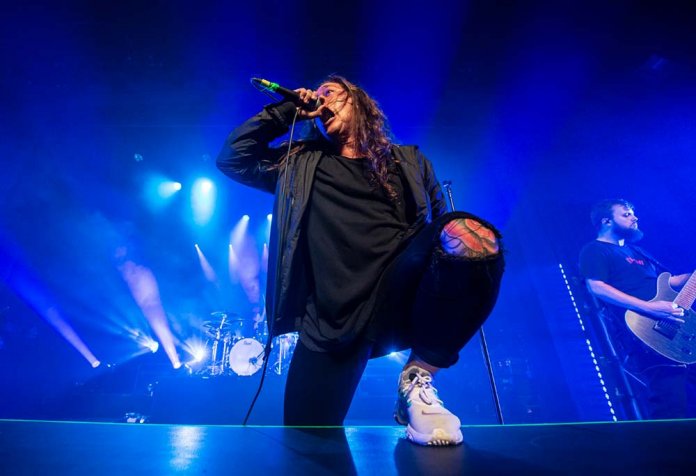 A big, unapologetically loud night out at Enmore Theatre

So. I popped my hardcore metal cherry on Friday night. Four bands, a sold out crowd, Triple J recording Polaris set live – this had all the hall markings of a big, loud night out!

Honestly though, I didn’t have any idea of what to expect as I entered the already dark auditorium armed with my beer and earplugs.

I had already witnessed the long lines of fans queuing up and down Enmore Road waiting to get in. This seemed a little unusual for 7pm when Polaris, the main act, weren’t on until 9.30pm but then Aussie band Alpha Wolf are not your typical ‘first of four’ line-up. The already huge crowd knew the show’s cues and screamed the words back unprompted to bucket hat wearing Frontman, John Arnold.

Taking time between the primal, guttural sounding songs to chat and thank everyone for coming to their biggest gig to date, you could tell how genuinely happy these guys were. They loved being on the stage and you could feel it. Oh and off the stage – at the end of the set, the partially masked guitarist dived off into the crowd.. I couldn’t see what happened – I hope someone caught him…! 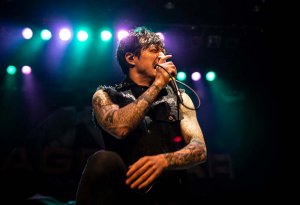 Next up were five piece, high energy, low penetrating growl, Tokyo Metalcore band Crystal Lake. We were treated to what appeared to be a standard soundcheck on the drums before the band came on stage – the supposed tech stopping the crowd in their little black Vans as he executed a crazy, ‘dominate the drum kit’ solo – wait – that’s drummer Gaku Taura – ‘cheeeerrr!”

With a sixth album under their belts, it’s fair to say they are one of the more established bands of this genre from Japan. Comfortable on stage, all with strong voices to scream the lyrics, they were a highlight – the crowd went off as the band thrashed and screamed their way through their set.

To this untrained, now heavily attenuated ear, the third act up, Floridian band Wage War initially sounded similar to the previous two bands. There was the urgent, persistent snarl of the guitar and relentless drilling thwack of the drum, each one earning the nod of a fan’s head, but these guys add a sometimes melancholic, always heartfelt ballad style chorus to each song. The clean vocals from Cody Quistad offering a break from the heavy pitched, throaty screams of the past hour. It felt really emotive and the crowd seemed to hang onto every word – and these were words I could finally distinguish! 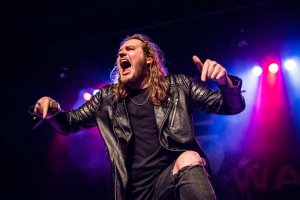 Once Wage War cleared the stage, the crowd waited patiently – singing along to the Enmore’s interim playlist – for Polaris. They roared as singer Jamie Hails opened with his powerful voice – and so much energy – he’s pumped – Triple J are recording the set live tonight!

Their performance was supported by bursts of coloured lights, spotlights, flashes lighting up the inside of the old building. I was fortunate enough to see Tool the other day so all light shows tend to pale in comparison now.. but this was pretty good! A ‘bigger, faster’ circle pit and wall of death were demanded by the band and delivered.. the balcony crowd looked like they wanted to play too as the singer asked everyone to stand, they started bouncing and swaying around sending a barrage of vibrations all the way up the seated lounge area. It had finally become a full sensory experience.

There was plenty of space upstairs for some experimental, eyes closed expressive dancing, which I could not stop watching. And I guess I have learned that is what this music is – freedom to dance to, scream to and relate to the sound however you damn well please. I can imagine bands like these have helped people though tough times and angst as well as helped them celebrate and have some fun. The crowd were a mix – hopefully there were a few first-timers like me there too – but there are a lot of people there that I’m sure knew the words to every song for those exact reasons. Everyone should try this style of music at least once – it is surprisingly inclusive and just wants to connect, engage and send a message. You never know, it may be the beginning of a lifelong metalcore romance.

Part way through a giant tour, within only two dates left in Australia, Polaris are playing at some iconic European festivals this year including Rock Am Ring in Nuremberg, Germany and at Download Festival, Donington Park in the UK. Catch them if you can!