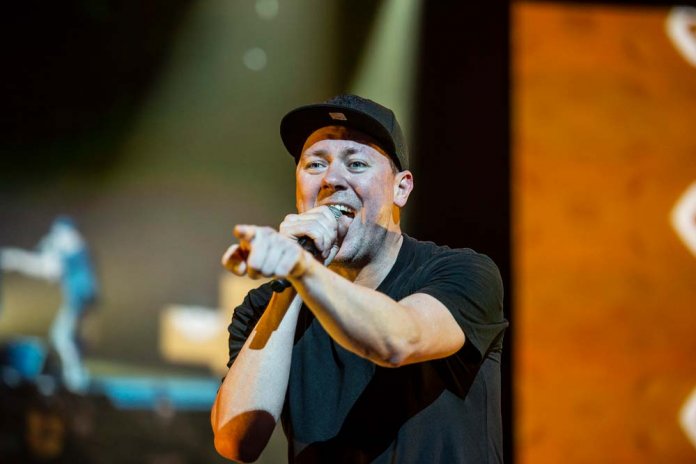 Hilltop Hoods are undeniably skip-hop royalty. A 15,000 strong crowd came together at Sydney’s Qudos Bank Arena for the second last date of the Aussie leg of the ‘Great Expanse’ world tour. The crowd, made up of kids, parents, grandparents left happy and with all the merchandise (bobble hats and hoodies everywhere!) Supported by Shadow and DJ Nino Brown and ARIA nominated Mojo Juju, it was a great night.

Shadow and DJ Nino Brown played classic hip-hop and RnB tracks getting the crowd going between sets – not an easy task but it certainly did the trick. After the old school classics we had a change of pace with Mojo Juju – a soulful voice delivering a powerful message. Mojo commanded the audience talking about the inspiration behind each of the songs. The new album Native Tongue is a letter to her younger self and aspires to be a voice to help others dealing with the challenges of sexuality, culture and family history.

Enter Hilltop Hoods. The crowd goes wild. Silver streamers fly from cannons. Confetti bursts into the air. Fire blasts light the arena. You get the gist…. this is every inch a first class world tour. And you can’t help but love these guys who just look like they want to have a good time with their mates on stage and entertain their fans who adore them right back.

They start with three of the best, ‘Chase that Feeling’, ‘Leave me Lonely’ and ‘Nosebleed Section’ and the crowd matches them lyric for lyric and arm wave to arm wave. Hilltop Hoods like a good collaboration and they brought some of their special guests along with them including Montaigne for ‘1955’ who sang and danced away in a moonboot (!) and Ecca Vandal who sang beautifully to a number of the songs from the new album and lent her voice to some of the back catalogue including Sia’s part in ‘I Love It’.

And what a back catalogue. So many hits, so much energy from the group and back from the audience. The finale was good old ‘Cosby Sweater’ which got everyone bouncing again right to the end, bouncing through the pink confetti, to buy more merchandise before heading home. Adios, bon voyage and god speed HTH – it’d time to show Europe and North America why we love you so.