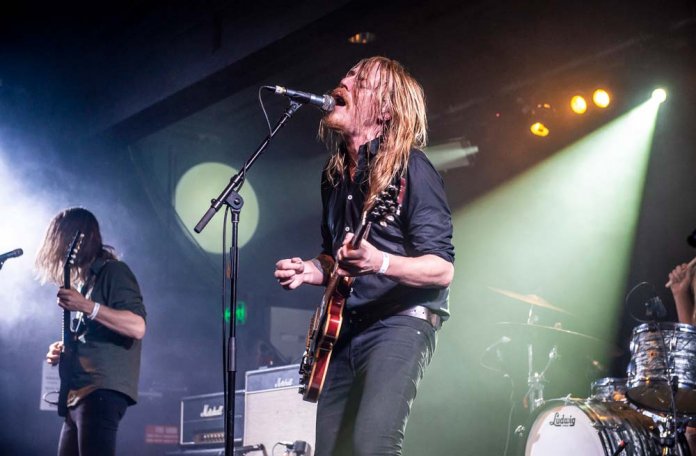 The crowd gathered at Crowbar on Parramatta Road blood pumping, psyched to see a band they thought may never play together again. Graveyard announced in 2016 they had split – three years later they are back. This whistle stop four venue East Coast Aussie tour seems like the band are just dipping their toes back in to see if people still want them – and it is clear from the night that all is forgiven. Let’s just call it a hiatus – time to regroup and grow and their fifth album ‘Peace’ shows exactly that..

Supported by Melbourne group Devil Electric, described as ‘Thrilling vintage-doom meets modern rock” and they certainly are. Dark riffs with strong 70’s influences, the crowd was captivated by the vocals of lead singer Pierina O’Brien, her strong and haunting sound carrying us through, finishing on my favourite ‘The dove & the serpent’. Check them out if you haven’t before. Bravo and thank you!

Stopping only a couple of times to talk to the crowd – Graveyard came on just after 9.30pm and smashed the set out of the park. Pretty sure Swedish people hate being called cool all the time but seriously – they just are. And what an experience to see these guys in this small and intimate venue – a band who play sell out European festivals. The venue was perfect for the some of the songs.. Uncomfortably Numb anyone? I think the audience felt every emotion and sang every word during that one. That song worked so well in a small dark bar – having that pseudo David Lynch feeling at times. By the end of the show the crowd looked like it was only just warming up, the head nodding now head banging, long hair and beards flying everywhere, security looking nervous, the band playing on. So come on Graveyard – the results are in, hurry back, 2020 needs you.