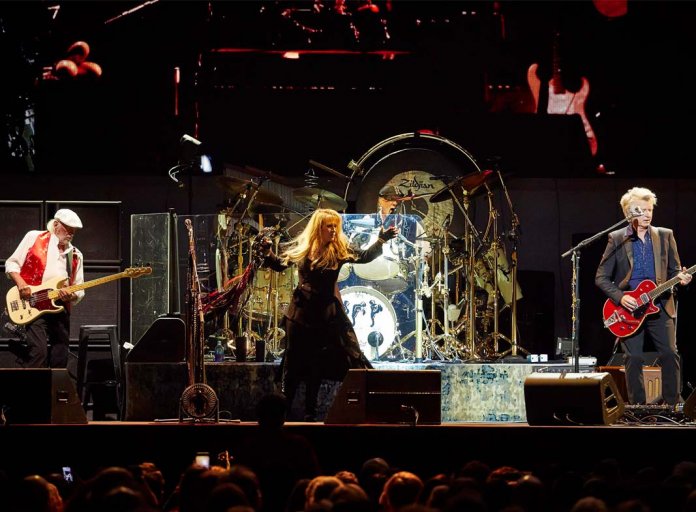 When the lights went out and the crowds hushed, a familiar sound boomed through the stadium, sending cascading tingles all the way down your spine, igniting that tailbone; the song of course was The Chain, one of many Fleetwood Mac classic hits. Soon after followed Little Lies and Dreams and from that point on, you just knew you were in for a treat. It’s rare to witness so many legends gracing the stage at once, whose music have not only stood the test of time, but also left an impression on so many generations. You’ve got the Fleetwood Mac regulars, Mick Fleetwood, John McVie, Christine McVie, and Stevie Nicks on stage, but then you also have Neil Finn and Mike Campbell getting in on the action too. With a cocktail mix this good on stage, it wouldn’t be rocket science to know the night was going to be filled with nothing but classic hits, and indeed it was! You not only had Fleetwood Mac songs to wag your tailbone too, but Crowed House, Split Enz and The Heartbreaker’s classic hits as well. With this came the long standing fans, like the red shirted man standing smack bang in the front row center, who in my eyes became part of the spectacle, as he grinded his air guitar ALL night long, and spread joy around him, high-fiving anyone that got up and danced. But he wasn’t the only one floating on air, you had people swaying shoulder-to-shoulder to banger tunes like Everywhere, and naturally grabbing their closest security guard to boggie with too. By the time Rihannon rolled on through, there was a steady flow of youngsters trying their luck to bypass security guards to get to the front of stage, but alas, they just didn’t have that magic ticket needed.

Soon after a hallo of light descended from above and hovered over Mick Fleetwood’s solo during World Turning, as he howled and screamed, the audience responded, and found themselves in a tug of war mimicking his every sound. Joining in on his solo was fellow percussionist Taku Hirano, offering jazz, afro-cuban and Brazilian flare to this 10-minute act. Both men offered a stellar and memorable performance that you wished never ended. Following this, with just as much emotion, but more subdued, was a Crowded House classic; Don’t Dream It’s Over. Without any prompting, and right on queue to the start of the song, a heavenly “herbal scent” drifted through the air, accompanied by an array of mobile phone torches lighting up the stadium like thousands of fireflies. This heartfelt performance from Neil Finn, alongside Stevie Nick’s ‘eternally romantic’ vocals, left tears in many eyes, which continued with Landslide. By the end of the song, the audience stamped their feet, like a herd of animals, wanting the magic to continue. The night did however come to a close with Don’t Stop (thinking about tomorrow), an uplifting way to end what was a truly special night. More humbling though was Mick Fleetwood’s reluctance to hurry off the stage. Continually thanking the audience and savouring every moment, he left us with these gracious words: ‘Take care of yourselves” and “Be kind”.