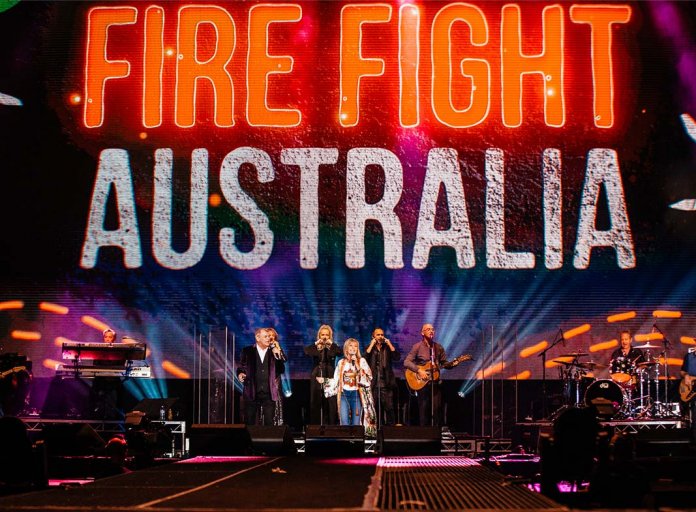 How do you even start to write about an 11 hour gig which saw new and emerging home grown Aussie acts like Amy Shark sing on the same stage as Queen + Adam Lambert?

Where Fitzy and Wippa were supported by Tom Hanks and Thor?

Where Michael Bublé made us sway one moment and Daryl Braithwaite let us sing a super extended karaoke version of Horses with us the next?

Where else would you be singing Bohemian Rhapsody in a smart phone torch twinkling stadium with 70,000 of your newest and closet friends?…Oh that’s right, on Sunday 16 February 2020!

If you weren’t there, didn’t manage to catch any of the television coverage or your friends many Insta-stories, here is a snapshot of some of the very many highlights of the day. 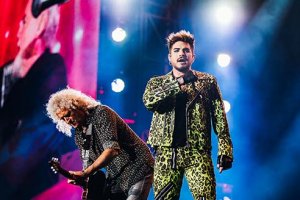 Firstly, thank goodness that Celeste Barber had a word with someone upstairs and the weather held out all day. Celeste was the epitome of the hostess with the mostess and brought us no less than costume changes, fancy dance moves and hot husband. Her giddy enthusiasm was palpable every time she rushed onto the stage to give us updates on how much has been raised (over $9.5m by the end of the night!) and how we should buy allll the merch and that we need to raise more money. And she is right. Although the bushfires are now classified as ‘under control’, we are only just beginning the long and emotional road to recovery.


The stadium steadily filled up from midday from the top of the top, down to the standing room dancefloor which in the midday sun looked like the salt flats of the Arizona desert, the white all weather flooring keeping us off the hallowed game-day turf.
With a little CC&Dry courage the crowd were dancing from the off. Each artist playing their hits for around 15 mins, with time in between for stories from people on the frontline of the bushfires in towns like Bilpin and Batemans Bay. Their stories of kindness, resilience and hope a stark reminder as to why we should give however and whatever we can. 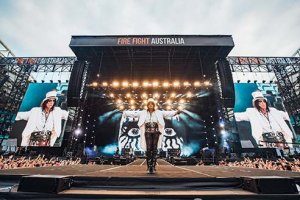 
A sobering moment towards the end of the night was when the audience stood as the names and ages of (most of) the 33 people killed in the bushfires, flashed up on the backing screens. This was followed by the statement that over one billion animals were also killed. Thanking all the volunteers for their kindness and selfless contributions, Celeste in her Scottie Marsh ‘Merry Crisis’ t-shirt reminded the audience that whilst volunteers from all over the country had given up their holidays, Australian Prime Minister, Scott Morrison had not. “Thank you – I’m sorry you had to do it all on your own, we love you” she said. 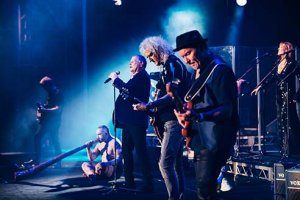 The evening came to a close with John Farnham, Brian May, Mitch Tambo and Olivia Newton-John singing Farnham’s 1986 classic You’re the Voice. Indigenous artist Mitch Tambo singing the second verse in Gamilaraay, sending goose bumps up arms all around the stadium. Accompanied by a digeridoo, bagpipes and the sound of legendary Brian May’s guitar – the new super group were joined on the stage by local volunteer fire fighters who swayed to the song before cannons shot streamers into the air.
What a day, what a line-up, what a cause – dig deep. Donate if you can, here. (This is the link) firefightaustralia.com
1 of 14