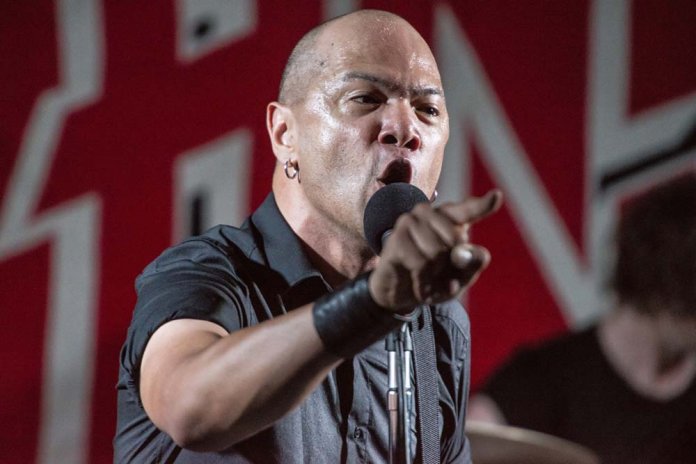 Dedicated fans gathered at Sydney’s Crowbar to see the long-awaited the return of Danko Jones. Fifteen years since their last headlining tour of Australia, and six since they last set foot on our shores at all, Danko Jones had a lot riding on this show. With rave reviews from their last performances, the band had a reputation to uphold, and it was clear the fans were eager for more of their charismatic brand of rock ‘n’ roll.

Opening the evening were Central Coast Hard Rockers, Screaming Eagle. Giving it their all, they put on a show fit for a bigger venue. With great guitar work and a high energy performance, they were clearly the right band for the job.

Next up were Black Heart Breakers, with their anthemic punk and rock tunes reminiscent of bands like the Ramones. They put on an enthusiastic and well-received show. It was clear they were having just as much fun as the crowd.

And finally, Danko Jones took the stage to cheers and calls of “we love you Danko”. After such a long absence, Danko Jones were keen to make their presence felt and reconnect with fans. And reconnect, they did. Launching straight into their setlist, they were not going to waste any time giving the fans what they wanted. After making the crowd boo them for not returning for so long, the band promised – and delivered – an epic rock ‘n’ roll setlist made up of some of their greatest songs to date. There was not a single moment of stillness within the crowd for the whole set: “Fists Up High” had the crowd fist pumping in support of the band, while others like “I’m in a Band”, “Lipstick City” and “Dance Dance Dance” had the whole crowd dancing. The man himself, Danko Jones had the crowd under his spell, and singing along to every song. The band were well-rehearsed and sounded exactly like their records, despite Danko’s claim of “I enjoy fucking up for you on purpose”. Danko dedicated “Burn in Hell” to the fans, the support acts and Silverback Touring, but swore that it wasn’t something to be offended by. A personal highlight was the trio of songs (“Full of Regret”, “I think Bad Thoughts” and “Had Enough”) which seemed to go down well with the rest of the crowd too. During their encore of “Sugar Daddy”, Danko told the crowd that everyone who showed up “tonight, gets to call me delicious”.

Danko Jones were at their very best, with great energy, their “larger than life” presence and singer Danko’s witty banter. It was a fun and very memorable night, and it was clear no one wanted it to end. I’ve never danced so much or laughed so hard as I did with Danko Jones. While Danko gave the show a 9/10 – to encourage the band to keep working hard – I couldn’t fault a single second. Thanks, Danko Jones, Crowbar and Silverback Touring for such a great night!