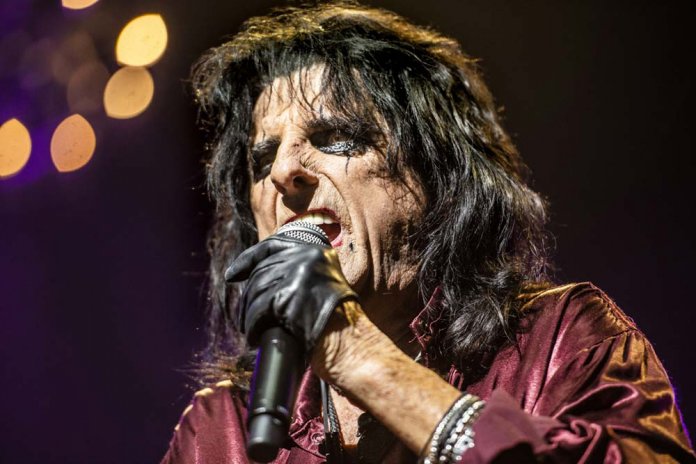 Ol’ black eyes is back and he hopes your nightmares are terrifying..It’s was a big night for music at Sydney’s Olympic Park on Saturday with legends Queen with Adam Lambert in town playing at the ANZ stadium and the Godfather of Shock Rock himself, Alice Cooper across the way at Qudos Bank Arena.

Supported by Detroit royalty MC50 and Aussie rockers Airbourne, if you like rock this was the place to be!

From early doors there were people of all ages everywhere getting a little pre-gig feed. Queen t-shirts, Alice Cooper t-shirts (from tours over the last 30 years) – we know rockers don’t discriminate – everyone was represented from Slayer to Iron Maiden and even the lesser spotted Nickleback in attendance.

The centre of the Qudos was fully seated which was a surprise but there were lots of families passing on the theatre of rock baton from generation to generation. The question was… how long would they stay seated… 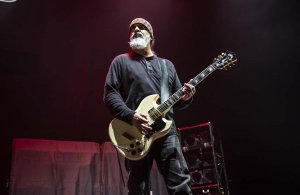 “Brothers.. it takes 5 seconds to testify… “MC50 took to the stage, everyone in rock black apart from original MC50 member Wayne Kramer in patriotic red and blue. Let’s have a look at this band. Wayne Kramer has made some calls to some friends and they have got together for a jam. Not your ordinary jam and not your ordinary friends – the result is MC50, bringing together members of Soundgarden, Fugazi, Faith No More and Zen Guerrilla – what a sound and what soul they have celebrating 50 years of MC5’s rebellious rock.
Proven when singer Marcus Durant steps up to ask the audience ‘What time is it? It’s time to kick out the jams!! Motherf*#$ers!!!!”

There was short change over and a high pitch scream from someone in the audience as the Airbourne background unceremoniously rolled down. This big band from little Warrnambool, Victoria bring the energy to the party and are an excellent line-up choice. 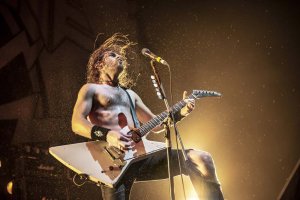 The set was bouncing as Burnout the Nitro played LOUD with big lights and guitar solos so good that predictably more and more of the audience were on their feet!

Although Airbourne formed in 2003 you would be forgiven for thinking they had been touring with the greats since the 70’s. Joel O’Keeffe (lead singer) jumping off amps, the stage, into the audience to play for a young girl in a wheelchair. Their performance, although original, is also at times a tribute to those that have ‘duck walked’ the path before them. What a warm up!

‘Before Alice Cooper there was not a rock show’ Rob Zombie once said as Cooper was finally inducted into the Rock and Roll Hall of Fame in 2011 and this set was exactly that.. Welcome to Alice Cooper‘s Haunted House….. Mwhahahhahahaha….

A classic Cooper theatrical start as a giant Frankenstein puppet stumbled onto the stage and the 72 year old rocker ran up the Haunted House set to sing ‘Feed my Frankenstein’ to the audience who sang every word back to him. 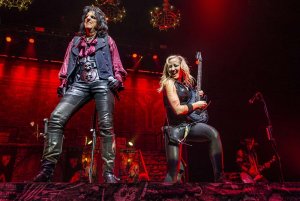 The leather pants are still tight and the cane is hella swizzling as he tells his story from swashbuckling rock lover to locked up psycho maniac.

Each song is a performance equally supported by his band who are so talented in their own rights. Glen Sobel on drums working those drumsticks like a Sergeant Major, flipping them around like they were attached by bungee cords to his hands, and all the amazing guitarists, Ryan Roxie, Chuck Garric, Tommy Henriksen and the impressive Nita Strauss bringing the right amount of glam and performance to the show.

After a few thousand people sang Poison at the top of their voices the unexpected highlight of the show may have been the giant ‘stay puffed’ baby that busted out of the haunted house and ran across the stage holding the recently guillotined (by his zombie lover) head of Alice Cooper…. yes, you read that right – you had to be there. Although if you’re a fan, you wouldn’t be surprised – maybe even sounds like a low-key night in for this guy….
Finishing up with glitter cannons and giant balloons for ‘Schools Out’, the band then brought out some members of the local Fire Brigade on the stage to thank them for their tireless hard work during the recent bushfires.

Thank you for coming to see us, excellent man!