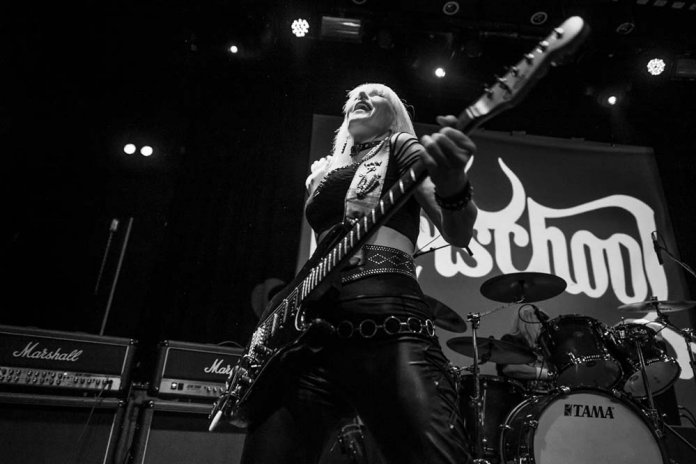 Another night at Manning Bar, another group of great bands. This time it was the turn of three heavy hitters from the 1980’s NWOBHM era taking to the stage (‘new wave of British heavy metal’ for the uninitiated!)

The small but dedicated crowd don’t hang around and are front and centre and ready to go when Tank starts. Patched denim, long hair, air punches, heads nodding along to the former ‘The Damned’ bass player Algy Wards band who are (finally!) making their Australian debut with their 2019 Re-ignition tour. Re-ignition is a tribute to the early days and as with so many bands, Tank have been through the changing of the guard. Bringing classic albums ‘War Machine’ and ‘War Nation’ to life – new line up were right on cue delivering songs like ‘Filth Hounds of Hades’, ‘Power of the Hunter’, ‘This Means War’ and ‘Honour and Blood’.

With barely enough time to get your next beer, Raven take to the stage. Theatrical hands and facial expressions – Raven throw all their energy into the crowd and hit all those high notes along the way. Not even a few technical problems could shake Geordie rock royalty John and Mark Gallagher – who famously gave Metallica and Anthrax a break with their first tours. Anthems like ‘Rock until you Drop’, ‘Take Control’, ‘Hell Patrol’ with newer songs ‘Destroy all Monsters’ (Exterminate!) got the crowd going with mashed up with a nod to Australian Rock Royalty AC-DC there was even a bit of ‘Long Way to the Top’ mashed in for good measure. This band still feels solid and the real deal.

Who remembers ‘Demolition’ and ‘Race with the Devil’? Yes! Girlschool are here, headlining and we all want to be in their gang!

The longest running all-female rock band (formed in school originally as Painted Lady) rock hard and have fun doing it. Although they would probably rather you forgot that this is part of their critical acclaim – Girlschool aren’t big into being known for anything other than being great musicians and that they are. Albeit being a bit under the weather tonight, aided by good old electrolytes, nothing was going to stop lead singer Kim McAuliffe from singing out the hits. Thank you Kim! It was at this point you start to notice that the crowd is punctuated with punky female rockers of all ages who literally are bouncing around to the short, metal fun songs. Girlschool may not be looking for feminist praise but they are certainly continuing to inspire female generations. Rock on!