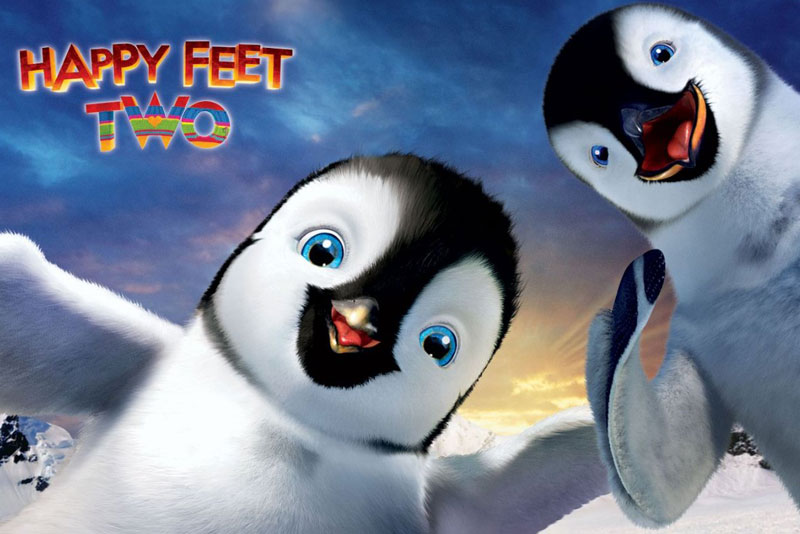 Thanks to Roadshow films we had the chance to see director George Miller’s ‘Happy Feet Two’ before its Australian cinematic release. This is our review of the film – but as usual – no matter what we say; we recommend that you still go to your local cinema and see the film because: There is no better critic than yourself!

‘Happy Feet Two’, is the 3D animated sequel of the original Academy Award-winning Happy Feet (also directed by Miller) and tells the story of Erik (voiced by Ava Acres), and his dad Mumble (voiced by Elijah Wood) trying to save the colony and their mom/wife Gloria (voiced by P!nk) who is trapped as big blocks of ice have melted and crashed their home. In their quest they will find old mates like Ramon and Lovelace (both voiced by Robin Williams) and some new friends, including a flying penguin, The Mighty Sven (voiced by Hank Azaria) who quickly becomes Erik’s idol and 2 very funny Krills trying to evolve, Bill (voiced by Matt Damon) and Will (voiced by Brad Pitt).

As expected ‘Happy Feet Two’ is a film full of music and primarily targeted, of course, at the kids, with a full celebrity cast voices, a formula which works for this kind of animation with 3D technology and versatile characters. Additionally, the incorporation of Bill and Will (Krills) are trying to achieve the same success as iconic Scratch in the ‘Ice Age’ saga.

The animation is outstanding – no question about the capabilities of new technologies with amazing textures, light effects and fine details everywhere, also thanks to a great job in art direction. Moreover, the visual effect are amazing, making it one of the few films in recent years where you can really feel the 3D effect, even at the ending credits when bubbles came out of the screen. Furthermore, the celebrity cast works great together, especially with some original team members Elijah Wood, Robin Williams and Hank Azaria, plus the incorporation of pop singer Pink as Gloria who applied her dynamic skills as a singer.

Unfortunately, the pitfall of the movie is the story as many other films do when they add “the son of” somebody, because no matter how cute is little Erik, such plot always tend to distance the son from the father (like Finding Nemo), because he wants to find his real self and talent, like learning how to fly like The Mighty Sven. This typical “daddy-son” issue seems to drive the whole film instead, with Mumble trying to earn his son back, deviating from the main story which is to save the colony and the environmental message related to global warming intended for the film, leaving everything a bit in the air untied.

Another flaw is the soundtrack which is not bad and the kids will definitely love it but there are moments where you really just want to say Stop singing and save the colony! In addition, Mumble’s famous dancing skills in the first film are pretty much absent in this sequel, except at the beginning and at the end. Plus the incorporation of a rapper Penguin is really quite slave-to-fashion, following the pattern of many other animated movies.

Despite all the plot issues, the films is very enjoyable and people of all age will love it with great animation, funny characters and amazing 3D effects, leaving a considerable message of environmental awareness at large and family values in everyday life.