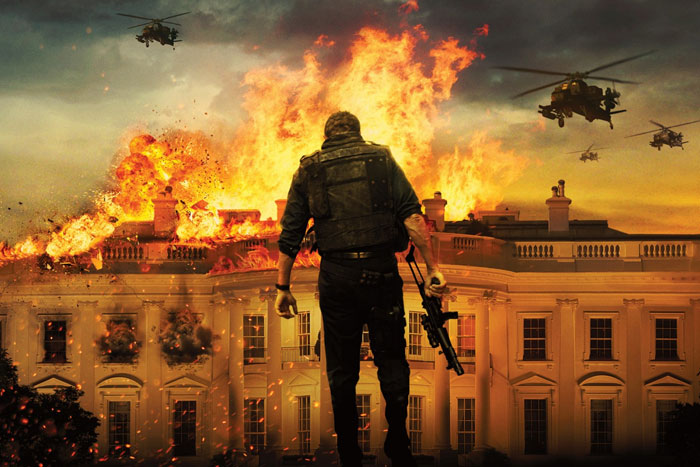 Thanks to Roadshow Films, we had the chance to see Antoine Fuqua’s Olympus Has Fallen before its Australian cinematic release. This is our review of the film – but as usual – no matter what we say; we recommend that you still go to your local cinema and see the film because: There is no better critic than yourself! Set in the USA during an unexpected North Korean invasion, Olympus Has Fallen follows the story of a former Presidential bodyguard Mike Banning (Gerard Butler) whose mission is to rescue the president (Aaron Eckhart), taken prisoner inside the White House, while his son has gone missing.

There is a lot of talk around this film as its director Antoine Fuqua is also the man behind Training Day (2001) and Shooter (2007), both excellent action films. However, Olympus Has Fallen is just 2 hours of American clichés – war, violence, gore and perhaps the worst quotes in an action film that just tickles your belly even in the most intense scenes. The film is a total mess despite such great cast including Gerard Butler, Aaron Eckhart and Morgan Freeman where scenes like the American flag falling from the top of the White House could have been taken from the Michael Bay archives.

Stil, let’s give some credit where it’s due. Gerard Butler really tries but the poor script makes him look like a puppet, becoming another Chuck Norris just killing people and including quotes such as “Lets play a game of Go F* Yourself, …You go first…Go and F** Yourself” as he faces the terrorist leader. On the positive note, it’s very satisfying to see him wipe out all the terrorists himself inside the supposedly most secure house on the planet (where all the secret service were taken down after 10 minutes) Gerard Butler’s gotta be in Expendables 3 next time! And if you are a Morgan Freeman fan, you will expect that he becomes the acting president as the current one is held hostage (Aaron Eckhart didn’t do much) Overall, Olympus Has Fallen is a ridiculous nonsense with lots of silly quotes and unbelievable situations (e.g. North Korean planes breaking the US airspace, F16’s delayed arrival to protect the White House and the magic introduction of the latest US weapons, just to name a few) But if you are a fan of typical action films, get yourself some popcorn and see Olympus Has Fallen because it’s full of explosions, fighting and pathetic quotes, which is the main purpose of it after all, no?

Olympus Has Fallen  is not showing in Australian cinemas