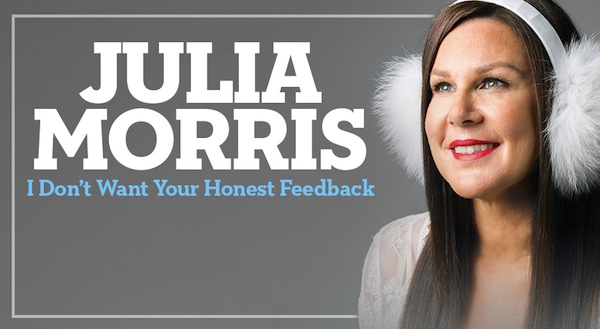 Due to overwhelming demand, multi-talented Australian comedian and our favourite girl-next-door JULIA MORRIS has announced a third Melbourne show of her brand new stand up show, I Don’t Want Your Honest Feedback. Morris is taking her new show to Brisbane, Adelaide, Melbourne, Perth, Darwin and Sydney during August and September.

I Don’t Want Your Honest Feedback will be Morris’ first stand up tour in two years. In it Morris tackles the issue of constant internet contact warping the perception people have of the value of their honest feedback. So listen up, Lady Julia Morris (yes, the ‘Lady’ title is real – Julia’s husband bought it on the Internet as a Christmas present) would like to help you feel better about not giving a F*%# about honest feedback. With hilarious stories of awkward moments and monumental faux pas, be prepared to leave with a newfound attitude on how sometimes we are just happier in headphones.

Morris has added a new show to her season at Palms At Crown on Thursday September 3.

Tickets for all shows are on sale. For complete tour and ticketing details, visit: www.livenation.com.au