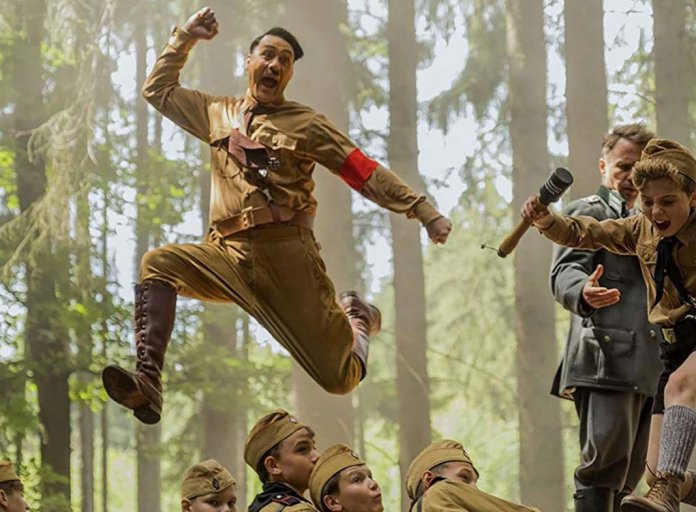 Young Johannes “Jojo” Betzler wants to be the best Nazi in Germany, and his imaginary friend Adolf Hitler is there to cheer him on. Taika Waititi‘s Jojo Rabbit walks a fine line between tragedy and farce, but can it stick the landing? 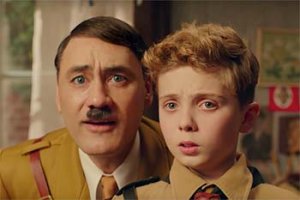 Jojo (Roman Griffin Davis) is a ten year-old Hitler Youth conscript, and has lapped up the propaganda without a quibble. His mother Rosie (Scarlett Johansson) isn’t too keen on his party allegiance, but because she’s got a young Jewish refugee hiding in the house and supports the anti-Nazi resistance, she bites her tongue and goes along with the madness. When Jojo discovers the hidden Elsa (Thomasin McKenzie), he has to question his loyalties and what he really knows about the world, especially as the Third Reich begins to collapse around him.

Jojo Rabbit is a difficult film to get a handle on. It’s not uncommon to use comedy to tell dark stories, but a lot of the humour here feels lazy and unwarranted. If the idea is ironic juxtaposition between Jojo’s perception of reality and the incredible horror of reality itself, it doesn’t always succeed. Waititi‘s portrayal of Jojo’s imaginary version of Hitler feels far too clangingly broad, silly and post-modern and not what Jojo would imagine him to be, and when the Gestapo raid the family home, a truly terrifying scene is undermined by ‘Allo ‘Allo-level silliness. The jokes here don’t really function as a tool of incisive satire, the entire story merely takes place in a slapstick, Wes Anderson-like version of Nazi Germany. It feels more like an attempt to soften the blow rather than give insight into the circumstances. 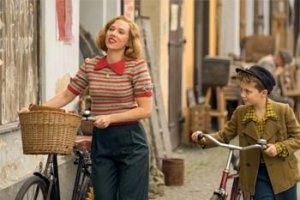 Where the film does shine is in the performances. Scarlett Johansson gives one of her absolute best performances as Jojo’s mother, Rosie, and Sam Rockwell is quietly heartbreaking as a conflicted Nazi officer with dangerous secrets of his own. The kids are excellent, with Jojo’s pudgy second-best friend Yorki (Archie Yates) absolutely stealing every scene he’s in. Tragic scenes are earned and feel sufficiently tragic, and the eventual collapse into deprivation and war feels shockingly authentic. Points are deducted, however, for the brutally unfunny performance given by the mystifyingly famous Rebel Wilson. Another complaint is the use of really unconvincing German accents, especially unsuited to the overly modern dialogue.

Ultimately, the film gets where it’s supposed to, and most of its failings can be forgiven. There’s a better film lurking in it somewhere, but as it stands, it scrapes only a mild recommendation.