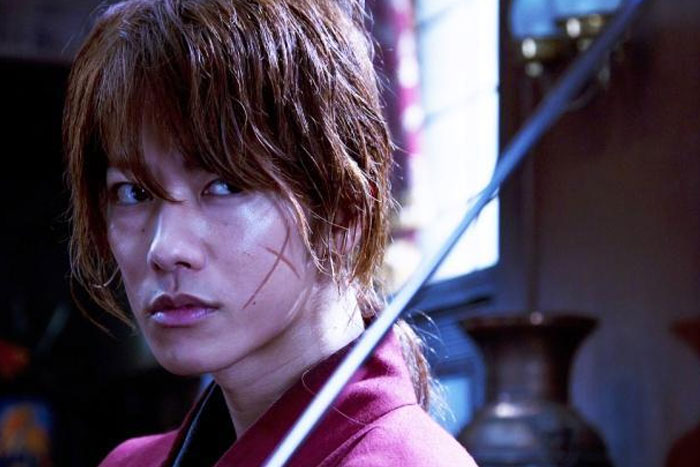 Thanks to The Japan Foundation Sydney, we had the chance to see Keishi Otomo‘s Rurouni Kenshin (るろうに剣心) at the 16th Japanese film festival. This is our review of the film – but as usual – no matter what we say, we recommend that you still go to your local cinema and see the film because: There is no better critic than yourself! Rurouni Kenshin, is the highly anticipated action adaptation from the Japanese animation/ manga of the same name (also known as Samurai X). It follows the story of swordsman samurai master Kenshin Himura (Takeru Sato), the legendary Battousai, who back in 1968 was the most dangerous killer in Japan. A decade later, Kenshin became a wanderer and vowed to never to kill again, leading a normal life until he faces an opium dealer and his gang who declares war on Battousai, unleashes terror amongst the town. On his mission, Kenshin has the help of new friends, including iconic characters from the manga and TV show, such as Megumi (Yû Aoi), Kaoru (Emi Takei) and street fighter Sanosuke Sagara (Munetaka Aoki).

Now, after many trial and errors on live-action adaptations from Japanese animations like the horrible Dragon Ball Evolution, there was a lot of concern on this Rurouni Kenshin film. This quickly disappeared after 5 minutes into the movie, seeing beautiful cinematography and a solid well picked cast that makes each character look like the actual manga. The film is wonderfully executed in every line and frame, presenting a pure Japanese animation style, where fights are fantastic without being gory; a cast that captures the essence of every personality, such as villains Jin-e, Kanryu Takeda, Gein and Inui Banjin.

The impressive fights did not use CGI at all (solely practical skills!), featuring Kenshin mastering his sword and performing his classic super speed movements/techniques which wowed the crowd in the cinemas constantly. Moreover, Takeru Sato’s take on the character is perfect, even famous sayings such as “de gozaru“ and of course “oro“. In addition, Sannosuke is another highlight of the film as he is a carbon copy of the anime not only in appearance but in attitude as an arrogant street fighter who carries a most feared weapon (Obviously his confrontation with Kenshin is highly anticipated by fans all around)

Perhaps the only flaws are the underdevelopment of certain villain characters as we would love to see more battle between Kenshin and Jin-e. Nevertheless the 2 hour duration of the film will do with full of fun and Battousai magnanimity. Overall, Rurouni Kenshin is everything fans can expect of a live-action adaptation from this beloved saga. Despite a somewhat different plot than of the manga, it is a superb film showing how a Japanese animation can be adapted to a film. The Japanese has done it again with their dedication and attention to detail so you won’t be let down, fans! Hence Rurouni Kenshin is a MUST SEE FILM! As for Sequels?…YES PLEASE!

For more information about the film and to buy tickets click here
Visit www.japanesefilmfestival.net
www.rurouni-kenshin.jp