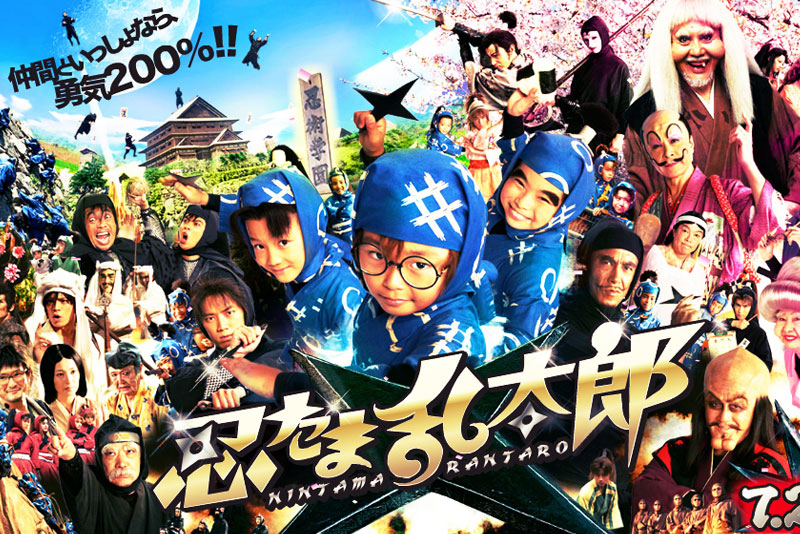 Japanese maestro Takashi Miike, who already blew our minds this year with the amazing ‘13 Assassins’ is back with the martial arts comedy ‘Ninja Kids’, an adaptation from the popular manga and anime Rakudai Ninja Rantarō (Failure Ninja Rantaro) by Sōbē Amako, Ninja Kids!!!  (忍たま乱太郎, Nintama Rantarô) .

This film tells the story of a young aspiring ninja Rantaro (Seishiro Kato), who comes from a low class ninja clan. Rantaro is sent to the Ninja academy in hope to become the best ninja ever under his family expectations. As soon as he arrives to the ninja school, Rantaro makes all kind of friends whose personalities are totally different from each other and unique.  Everything seems to be going well until a killer appears in the house of the most famous hairdresser in town,  aka the ex Usetake ninja Yukitaka Saito (Takeshi Kaga) and his 4th grader son Takamura (Takuya Mizoguchi). They soon find out that the killers are the same people from their old clan, the Usetake.

In order to save them, a race has been decided upon between the ninja kids and the Usetake, where the first one to ring a mystic bell on the top of a mountain can decide the faith of Saito.

Ninja Kids, is a comedy like no other, because it features something that American films don’t. For example, in this film you laugh at the most obvious situations, such as people falling over all the time and this is magical thanks to a wonderful Japanese cast and great directions. The movie is a 2 hour comedy, extremely similar to the original manga and anime, with each character presented in very cartoony way in great detail, such as clothing, hairstyle, and the classic giant plum-sized bumps on their head, making you feel like you are actually watching a TV show the entire time.

The young actors in the film are very cute, you love them and laugh with them and their innocence hypnotises you with their white humour and lots of adventures, somewhat reminding us a bit of the first few Harry Potter films or Narnia, because the story reaches 100% into your inner child.

Another highlight is the few and imperceptible use of CGI in the film, a proof of master class from Miike to Hollywood, showing us great things can be done in an old school way.

Takashi Miike, once again in a topic different from his previous films, shows us why he is one of today’s greatest filmmakers, achieving success with a cartoon tale in this real live-action comic book movie, that will entertain the entire family…and we really hope, the rumoured remake of this movie by Hollywood won`t ever see the light of the day!

For more information about this and other movies at the 15th Japanese film festival,
just check the official website here