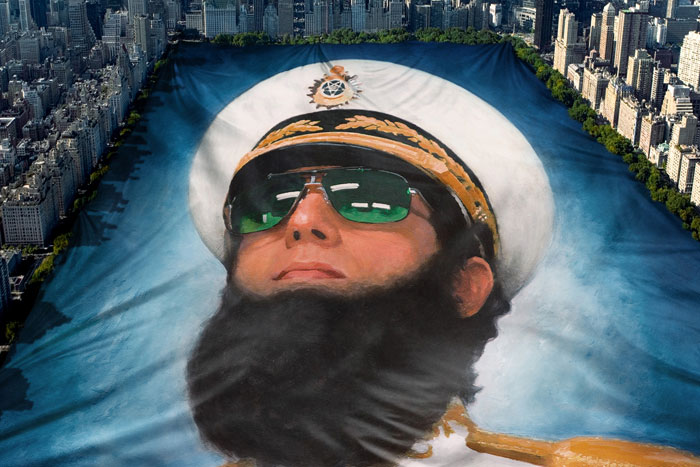 Thanks to Paramount Pictures, we had the chance to see Sacha Baron Cohen‘s new comedy The Dictator before its Australian cinematic release. This is our review of the film – but as usual – no matter what we say; we recommend that you still go to your local cinema and see the film because: There is no better critic than yourself!

The Dictator is the story of Admiral General Aladeen, the nasty ruler of oil-rich and fictious nation of Wadiya, currently developing a nuclear weapon to be the likes of fellow dictator Hussein and Gaddafi, just to name a few.

Aladeen’s fate suddenly changes when he travels to New York to make a speech before the United Nations, where he is betrayed by his right-hand man (Ben Kingsley) who uses a body double of the Admiral General as his own puppet in order to make him sign a constitutional agreement making Wadiya a democracy.

After being tortured (somewhat!) and stripped of his iconic thick beard, Aladeen escapes and is forced to survive on the streets of New York where nobody recognizes him. Then he meets a lovely activist, Zoey (Anna Faris) who gave him a job in her organic store where she only hires immigrants and political refugees, giving him time to plan on how to retrieve his power and his country.

The Dictator goes against Sacha Baron Cohen‘s usual style as it is a film which actually has a script and storyline in comparison with his past mockumentaries like Borat and Bruno which were pretty much about nothing but still comedy hits.

The film is a full parody of the most infamous terrorist and dictators in our era, even dedicating it to the memory of Kim Jong II. It is probably not recommended for Arabic or Islamic viewers either as some of the jokes are extremely rude for their beliefs. However, these jokes are what makes the crowd laugh as Cohen`s keeps his rotten humor and comedy sequences, at times harsh but amusing including his repetitive and still iconic sex jokes.

The best thing about The Dictator is perhaps Cohen’s comedy skills as Aladeen, using the foreign accent and making it funny most of the time. Cohen also has the help of Jason Mantzoukas who plays nuclear scientist Nadal, supporting his ruler on the nuclear mission. Both of them delivers funny and outrageous political black humor especially when they jumped in tourist helicopter over Manhattan talking about a Porsche in their Middle Eastern language, including quotes in English on 9/11, Empire State Building and Statue of Liberty, making explosion noises to scare other passengers, making us cinema audience laugh.

Another clever and funny element in the film is the soundtrack playing some classic songs in foreign Middle Eastern language, such as REM “Everybody hurts” and a very catchy R&B song you will recognize straight away whose lyrics have changed using the quote “It’s Aladeen motherf**” in the chorus. You won`t be able to stop singing it after the film ends!

The movie also includes some celebrity cameos like John C. Reilly in a minor role, Megan Fox sharing the bed with the infamous ruler of Wadiya and other funny and pointless ones.

Overall, The Dictator might or might not make you laugh as it is a different kind of comedy which could disappoint Borat/Bruno’s fans with an actual storyline and less rotten. However, if you have an open mind and like to hear Middle Eastern jokes about how women should be treated as rubbish, or see how Anna Farris teaches Aladeen how to “explore his body” to find pleasure, this is definitely a film for you.

The Dictator opens in Australian cinemas May 16th