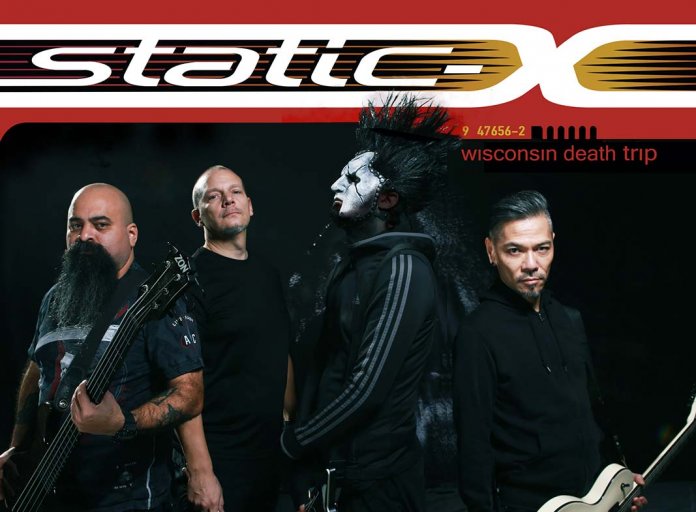 We had a chat with TONY CAMPOS the bass player of Static-X (not to mention other world class bands such as Soulfly) – ahead of the bands tour to Australia in August for a memorial tribute to Wayne Static & alongside other hard rock superstar acts such as the non-dead m*fos in DOPE and those who already dress like they are in Wednesday 13.

SR. Tony, you’re touring Australia with Wednesday 13 and Dope very soon, you all must be looking forward to it!

Yeah, definitely. I love Australia man; they’re bringing us back to ‘oz’ again and it’s cool.

SR. Will you be showcasing any new music over here?

Yeah, we’ve actually just started a US tour which kicks off in Arizona on the 18th to do that and then go to Australia in August, then September we are in Europe, and then November & December we’re going a second leg in the US! The tour there is to celebrate the 20th anniversary of our first record, and to do a kind of memorial to our departed lead singer WAYNE STATIC. That aside there is a new album in the works that will feature some of his final works, but as far as the songs that we are gonna be playing live, at least for this run we will be focusing mainly on the songs off of the first record, then we will fill the rest of the show out with ‘hits.’

SR. I did want to ask you about what kind of equipment you have been using lately for your *ahem* slapping on the bass there…

I’ve been using Darkglass Electronics for their distortion pedals and there compressor, I still use my KD trusty 21 eb pedal for my clean tone & I’m still using Dunlop strings, they’ve been a really awesome sponsor of mine, as well as EMG pickups, they’ve been really killer I’ve been using them since I was 13 years old, all my bass hardware I get from them, and they’ve been a really cool sponsor for a long time now. I’m really grateful to all of those guys that help me do what I do, also an old sponsor that just came back to us is Electrovoice – they helped out Static-X for the majority of our career, so when they heard we were doing this again they actually reached out to me and volunteered to provide us with some awesome microphones and equipment and I’m really grateful. Those guys have been a huge help to us to be able to do this.

SR. Have you got a favourite city to tour in Australia?

It’s hard to pick man, they’re all a lot of fun, Sydney, Adelaide & Perth are always equally cool. But I always have a really good time in Australia no matter what city I am in.

SR. Would you say there has been any changes in recent times to either your sound as a band or in your approach to songwriting?

Well throughout the bands career there have been changes for sure, but for this record, being the 20th anniversary of our first record, we really tried to recapture that vibe and spirit of what we did back in the day, having our original producer involved really helps achieve that and I think it’s gonna capture that old-school vibe that we had on that first record.

SR. Have you toured with Wednesday 13 or Dope before?

Actually, the first two years that we toured, DOPE was on 4 or 5 of those tours, so we go way back with those guys, so to have them on the tour is really cool and gonna bring back a lot of cool vibes from back in the day.

SR. What final message would you like to say to your fans down under looking forward to seeing you here in August?

I’m just really thankful and grateful for them that they’ve been supportive for what we’re doing and that we are able to bring this to Australia one more time. It’s always been one of our favourite countries out of the US to play for sure, so to be able to bring it back and see you again is very humbling. So, thank you.

Don’t miss Static-X touring across Australia with the almighty DOPE and horror punk legends WEDNESDAY 13 whom are all coming over to shock and rock our socks off in August.

Get your Tickets from: metropolistouring.com/static-x-2019/ 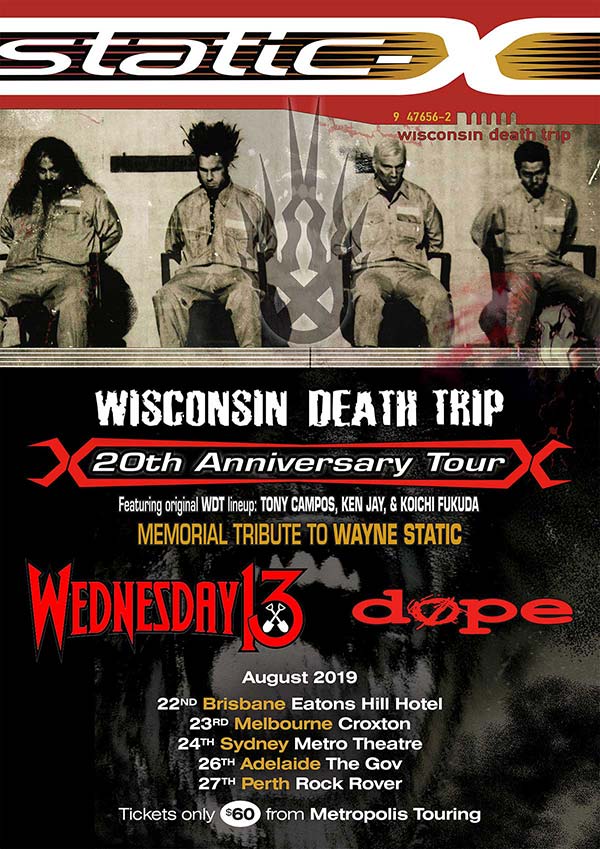