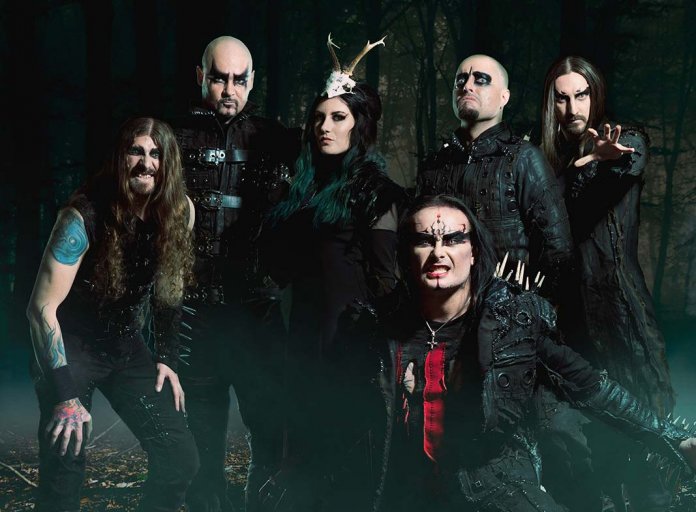 Cradle of Filth return to Australia and New Zealand for 2019 with Cruelty and the Beast being performed in it’s entirety, this time around they are performing just about everywhere they could in the country as opposed to last year when they only hit up 3 states. This is going to be one HELL of a show, with some rocking additions to the groups line up in recent years, they are said to be not just sounding but putting on a bigger and better show than ever before. Fans will of course be treated to more than just the album front to back though, with fan favourites certainly being thrown in to the mix later in the evening. So get your black eyeliner out and your contact lenses clean and ready, for ghouls are going to be out in full force for a night of extreme black metal whatever state you’re in! This month! We have a chat with guitarist Richard West before he takes to the stage today for the first show of the tour and embarks on a conquest of our humble country.

SR. Are you ready to play for the first leg of this tour in Australia bloody damn soon!?

Yeah, we cannot wait, last year was my first time in Australia. I’d never been here before. I was very excited, the Australian crowd was incredible, so great, it was simply amazing. We can’t wait to play once more. It feels like we’re on holiday, can’t sleep, but so tired and excited. We will try and get some rest but we will have the energy for the shows regardless that’s for sure.

Yeah. People from Adelaide got very vocal that we weren’t coming there last time. It’s not like we sit there and say we don’t want to play in a certain city, people take it out on us but it’s like, we want to play everywhere. So this time it’s gonna be great that we get to cover more ground.

SR. I understand the last time you were in Adelaide that was a bit of a controversial show would that be safe to say?

Well I’ll be honest with you. I wasn’t in the band at that point, I joined in 2014, and I think that Australian tour was in 2013. It wasn’t long after I joined the band and I had heard from Dani it was a bit of an interesting one, but the ins and outs behind it I don’t know alot about it, all I heard is it was interesting to say the least, either way, it is a new line up now since the last time we played in Adelaide and I think that we’re on to a winner here. This line up feels really good. When you talk to Dani he will agree. It’s a great writing chemistry, a great performance, it’s kind of like a different kind of energy but still very much Cradle of Filth.

SR. Has Lindsay gone off on her own?

Well she’s still very much a Cradle of Filth member, a lot of people assume that because she’s kicking off the solo career that she has. But she’s been doing it for years, but kind of on a smaller scale, this time she’s going to release a proper debut album, that’s the confusion, she’s very much a member of Cradle of Filth, it’s just that when we finish pretty much in early November, that frees up a lot of time to write the new Cradle of Filth album. We all are playing music outside of Cradle of Filth. That is just one of her projects, and she’s got a release in the works, we’re all looking forward to hearing her album, I’ve heard bits and bobs, it’s going to be interesting, I can’t stretch more enough that she is still very much a member of Cradle of Filth. Obviously she needs a big campaign to launch her solo career and that takes a lot of her time. But it does not distract her from Cradle of Filth whatsoever. That’s the same as any of our projects. So we wish her the best of luck with it.

SR. Do you know of any support acts for the shows in Australia?

I’ll be honest with you, I don’t. From what I gather there will be a local support, but that’s what I gather. I don’t know the ins and outs to be honest with you. I actually don’t know. We’re all fans of music at whatever level so especially if there’s bands watching from the side of stage it’s appealing, you never know which ones may end up next visit being the main supports for the country, that’s always something that generally happens eventually, they were supporting before, then they get big on their own all of a sudden. So that is always pretty cool to see.

SR. Was there any final messages to your fans in Australia that look forward to seeing you soon?

We cannot wait to play. Last year I loved Australia and that was my first time here. It’s gonna be insane, it’s gonna be well worth the trip over here.

SR. What guitar are you playing at the moment?

I’m using PRS guitars, I’ve been using them since I was sixteen. I remember getting a part time job just to buy one, I love their guitars. I don’t have to think twice about what I’m playing, I’m a guitaraholic and I believe there is a guitar for every purpose.

SR. How many have you got in your collection total?

Right off the top of my head, in my music room ten PRS’es, a Gretsch, a Fender strat and a  Hagstrom, I’m trying to downsize because I don’t use a lot of them anymore, the problem is I’m always finding guitars, I love to develop the collection, the older I’ve gotten I’ve started to let go though, now I’m only going to keep hold of the guitars that have tremendous sentimental value, I’ve got so many PRSes but they’re all different, they’ve all got different pickups, and they’re all completely different in other ways too.

Don’t miss Cradle of Filth delivering their dark metal insanity with Cruelty and the Beast being played start to finish and other hits from across the ages also… This September all across Australia! and with a stop in New Zealand too!

GET YOUR TICKETS HERE:
destroyalllines.com/tour/cradle-of-filth-2 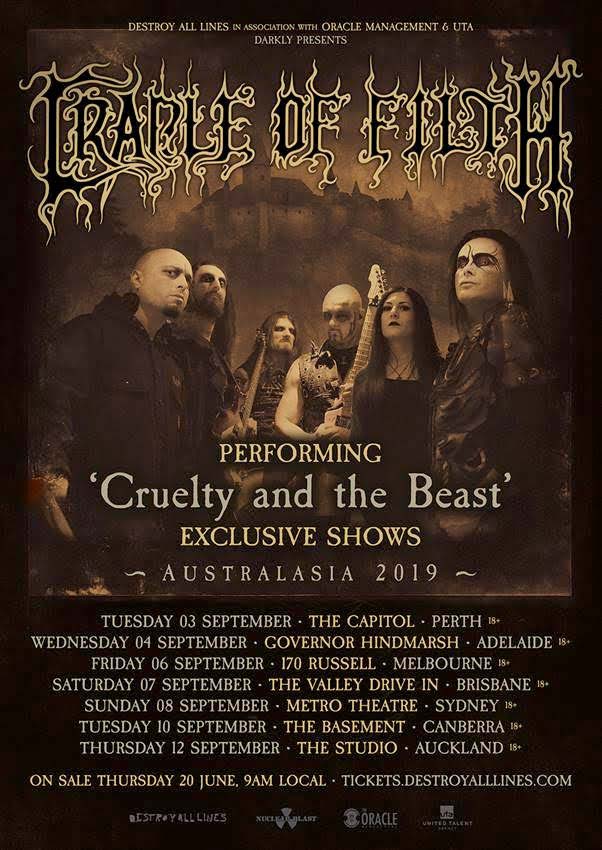