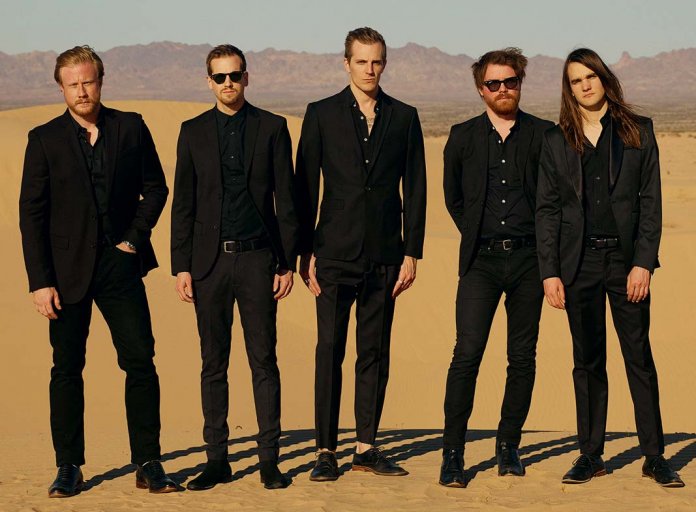 The Maine have always had a strong fan base due to their timely and inspired music, as well as a refreshingly down-to-earth attitude. Having grown up alongside many of their fans, and navigating their way through their formative years together, has really strengthened an already-strong bond.

With a new album ‘You Are OK’ bringing them to new heights and a return to Australia fast approaching, The Maine seem to have truly found their place in the ever-changing music world.

Spotlight Report got to sit down with Pat Kirch to talk about how the band has grown, their new songs, and what they have planned for their Australian tour!

SR: So many of us grew up alongside your band. So how has The Maine grown up since the days of Myspace?

PK: Oh man … I think a lot. I kind of have the attitude – or the analogy – of when you’re seventeen to when you’re twenty-nine now you’re into different things. You’re into different music and you expand a lot during that time period. If you don’t, I think something’s kinda wrong. Obviously, everybody loves to go back and listen to things from their past and continue to appreciate it. But as us making current music now, I think we’ve just aged like anybody would during that time and I think that’s kinda how our band has progressed. So, it’s been exciting to now have a catalogue of albums where it’s not so much the whole picture has to be painted in ten songs. People can go and they can pick and choose which parts of our album they like.

SR: And how do you feel about the fact that your fans have grown up with you – from seventeen to adults – and are still listening to your music?

PK: Oh yeah, it’s exciting and it honestly makes it way more fun, because there are people that we’ve seen for ten years now. They have context for what we do, and they get it! And the fact that somebody would have anything be a part of their lives for that long – a friendship, a relationship or anything – is hard to do! So the fact that they have picked our band is incredible. And it’s something that we appreciate!

SR: A big part of your fanbase is that you have always been giving back to them – right from day one. How did you generate such a strong bond with your fans?

PK: Honestly, it was something that didn’t really come to mind until people started bringing it to our attention. For us … how we were raised or whatever … we just always had the attitude of if people are going to support what you do, you should thank them and try to give back to them. And I think that’s just kind of the attitude we had. And people connected with that and connected with the songs. And over time they just have gotten so attached and a part of what we do! It wasn’t really an intentional thing, it just kind of happened to work out that way.

SR: Speaking of giving back to your fans – a lot of bands talk about their love of playing intimate shows and getting up close and personal with their fans. You guys took this to a whole new level with your special show just for your huge fan, Natalie. How did you come up with that idea? What inspired it?

PK: That was one of those things that we said kind of as a joke and then we just did it! I think we’re doing things sometimes just because we think it’s cool! I think about it like … imagine if my favourite band did a concert for only me – with an orchestra – that would be really cool to see! So then I think, “well, why don’t we do that for someone?”

SR: I think it was a lovely idea and I’m sure you made her day!

PK: [Laughs] Yeah, I hope so! We put a whole bunch of effort into it!

SR: ‘You are OK’ was released in March and it is doing so well! Number one on the Billboard Independent Album Charts, Number two Rock album … so many successes! Congratulations!

PK: Thank you so much!

SR: What do you think it is about this album that’s resonating with so many people?

PK: I wish I could tell you! I think that’s kinda the magic of music. If you could put your finger on it, then everybody could have a success! The fact that our audience has allowed us to make music for ourselves, and they don’t want us to pander to what would work on the radio at the time, or they don’t want us to pander to what they heard on the album before that they liked … they want us to do what we want to do. I think that’s allowed people to continue to care about the albums that we are making. We’re making them from that perspective of “what do we think is cool right now?”

SR: The album really touches on mental health and the struggles that can often come with that. It seems like the whole conversation around mental health is important to you guys as a band – would you say that’s true?

PK: Yeah, I think that’s something we didn’t touch on as much in the past and now we have done more and more. It’s a fine balance of “do we have a responsibility to do that because we have a platform, or are we just five guys that make songs as a band?” … and that’s something we’ve gone back and forth with and I think where we’ve ended up with is what feels good in the moment. Sometimes there are things in the world that are happening that we want to try to help out with and touch on, and then there’s times where it’s us trying to be good people … and making albums we like is also enough at times too.

SR: Oh, wow! Okay! Well, “Flowers on the Grave” is the perfect way to end the album. I mean, it’s beautiful and it links back to the opening song so it’s a very cyclical album. Was that always going to close out the album?

PK: Oh yeah! I mean, once you get into a ten-minute song, I think it would have been an odd fit to be anywhere else in the album.

SR: Yeah! Very true! And like I said, it’s also the best way to end the album – with the refrain from “Slip the Noose” coming into it!

SR: You guys have always been really keen on having a free “meet-and-greet” policy.

SR: It’s not really a common practice in the industry. Why do you think that is?

PK: Um … Something that we sometimes get crap from other bands is, people say “it’s hard to make a living being in a band and these paid meet-and-greets are how bands can make it work” … which I guess to a certain point is a valid thing. But I think there are other ways to make the money and also once these artists get past that point of where they are supporting themselves as a band – you don’t ever see bands then say “oh, our meet-and-greets are now gonna be free”. So, for us, like we’ve said a hundred times, it comes down to a human thing. We don’t want to feel like puppets. We don’t want to feel like people are paying to meet the animal at the zoo. We’re normal people and we can come out and say hi to people just like anyone else would. So that’s why we do it. And to show appreciation for the people that make our lives possible.

SR: So, there’s a pretty good chance when you’re here in Australia, fans will get to meet you after the shows?

SR: And speaking of the shows – what can we expect from you guys on this tour?

PK: Oh man! The songs off the new record are very fun to play live. So, it’s kind of reinvigorated us with the set and made us want to put on more of a high energy show. We’re always adapting the setlist and the show, so who knows what we’re gonna do, but I think with every tour we’re trying to find something new that feels exciting and add some things to the set that we haven’t ever done before. And we have only headlined in Australia a couple of times, so there’s a lot of songs that we haven’t ever had the chance to play, that we have in other places, so I think the big thing is: we’re gonna play as many songs as possible from all the albums.

SR: That’s great! And what else are you hoping to do while you’re here?

PK: I’m just excited to be there! First off, I think playing the shows, for us, is the most important part. That is obviously what we’re looking forward to the most. But, if we can get a chance to go hang out at the beach, that would be cool too.

SR: Hopefully we have great beach weather for you guys!

PK: I guess the weather there is kind of always good!

SR: I can’t deny that at the moment! We’ve been pretty lucky this year! Our winter has been especially warm. Our average temperature in Sydney has probably been about seventeen [degrees Celsius]. I can’t think what that is in Fahrenheit.

SR: With all the extra success of this new album, you’ve probably got yourself a bunch of new fans. So what’s the most important thing for them to know about you guys?

PK: Oh, man … I just think that there’s a lot to unpack. There’s a lot of albums to go back to and listen to. I think the big thing is we want everybody that comes to the show to feel like they’re a part of something for the night. We want to hang out with you guys after, we wanna have a good time at the show. I think we’re just five guys [laughs] playing music. I hope … we’ll play the songs and the concert will speak for itself.

SR: And for everyone eagerly waiting to see you – do you have any final words?

PK: Just can’t wait to be back. We’ve been looking forward to it. Get ready to go wild with all the new songs! I think everywhere we’ve been so far since the album’s been out, we’ve had really awesome shows. Just seeing people singing along to the album after the songs have been out for a couple days … and then it’s just continuing to get better and better as the months go on. So, we can’t wait, and we’ll be there in September!

You can catch The Maine at a show near you:

For complete tour information, or to buy tickets, visit:
www.destroyalllines.com/tour/the-maine/