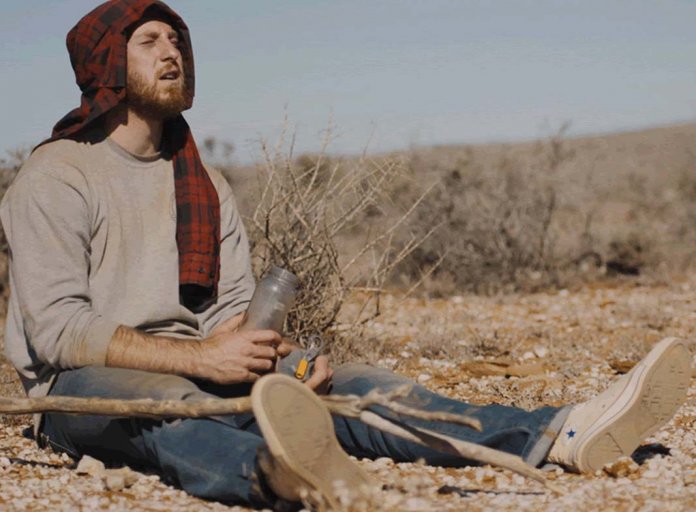 Now Mr. Green is set to release his feature film ‘Outback’, a survival thriller following a young American couple who quickly find themselves stranded in the unforgiving Australian outback.

To find out more about the project, we had the chance to chat with Mike about shooting the film using a credit card, Australian genre films and more.

SR. The film is based in a true story as far as we know. When do you find out about this tale of survival and what challenges did you face to make this into a full feature film?

MG. I remember the story some time back. Did a bunch of research and developed the narrative to suit a feature length film. People go missing in desserts frequently and it happens easier and quicker than you think. There are a lot of stories of survival and many of people that perish. People wandering around in a dessert can wear thin for an audience quickly. I needed Outback to be a subjective experience and I knew sound would play a huge part in that. We had Wayne Pashley (FURY ROAD, GATSBY) mix the film.

SR. You had to shoot the film 10 days using a credit card. Was this a personal decision in order to have full control of production?

MG. No. It was an act of desperation. I was prepping a feature film I’d been writing for a couple of years. We had cast attached and were getting close to making it. Then an A-list project (Angel of Mine) was announced. On the surface it had similarities and that pulled the rug from under our film. Now with a fresh baby my wife was going back to work from maternity leave. So, I had small window of time, a couple of months to write, cast and prep a film that I could shoot in 10 days. I designed a narrative that could be funded on a credit card.

SR. Speaking about the cast of Outback. Can you tell us how was the casting process?

MG. I first cast Lauren Lofberg in the lead role. Thru the audition process I got her to put down some self-tapes. She opened up about what was happening in her real life. I noticed there were some things she was working thru. Relationships, that first year out of school, crossroads we have all faced at that young age. With her blessing we explored them and build some into the script. It gave her an immediate and personal way into the story. With limited prep time I thought this would be a smart way into fast tracking Lauren’s ability to connect with the character. With Lauren cast I went about finding her partner and discovered Taylor.

“…Times are changing. The cinema experience is evolving. It’s up to us filmmakers to make the most compelling movies possible.”

I put them thru an intense chemistry test where I filmed (with DP Tim Nagle) a boot camp like exercise on Coogee beach. I pushed them physically and emotionally and wanted to see how they would respond in this extreme scenario. Both did amazingly well and from that exercise I had the confidence to build a feature film around their performance.

SR. Australian genre films are big hits in some overseas markets, especially in Asia. However, here Down Under, is so hard to get them into cinemas. What is your take in this situation and what would you do to fix it?

MG. Times are changing. The cinema experience is evolving. It’s up to us filmmakers to make the most compelling movies possible. Take responsibility to make something truly amazing. The audience will follow. Putting a film into a cinema is costly. Distributors want make money from the exercise so they can do it again. Give them something to have confidence in. They are actively looking for films.

SR. Do you think streaming services open the door for Australian genre films to become mainstream, or do you believe streaming will slowly kill the film industry as we know?

I think streamers will help fund some Aussie genre which is great. We need more! But they are still looking for outstanding storytelling. It’s super competitive. I keep coming back to being tough on yourself and making your scripts exceed expectations.

MG. I’m focused on being prolific in the elevated genre space. Script is king and I have a number of exciting projects in development. My goal is to shoot a film a year. One day I’d love to start producing for other filmmakers. We’ve sold Outback to a US Studio and they are interested in my next project.

SR. Any advice for young aspiring filmmakers out there?

MG. Don’t spend to much money on your production. Keep making things. Practice is the key. And be tough on yourself. Improve, improve, improve. And finally if you don’t love it, go find what you do love doing…