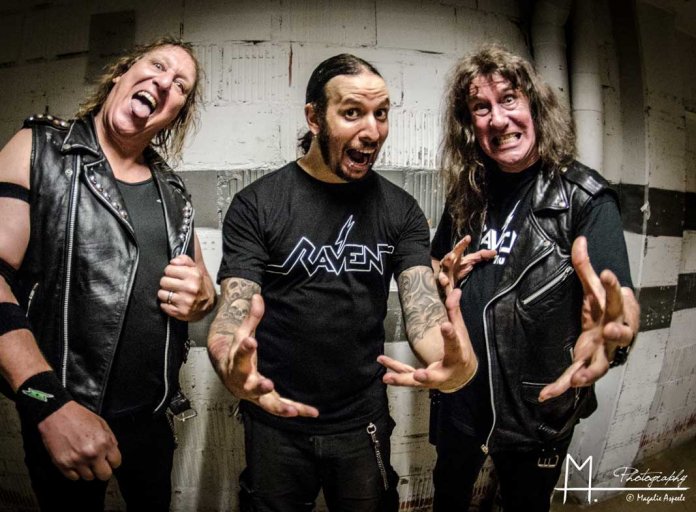 We had a chat with John Gallagher the lead bassist and front man of the legendary English heavy metal band known as RAVEN ahead of the impressive groups Australian tour which is kicking off this weekend! They will be dishing out an arsenal of hits from their epic career which currently spans across a whopping 13 albums. We discuss what else is new with the band and which one of his many crazy basses he will bringing down under for the groups long awaited and debut visit to us here in Australia!

You’ve been in this band for quite a while right?

I’ve been in this band for most of my life, me and my brother decided to form this band way back in the cretaceous era (1974). We had one acoustic guitar between us, Mark a guy from up the street come up one day and he talked about playing the bass and it all started from there…

You don’t just play bass guitar though do you, you use your ‘pipes’ a fair bit?

Yeah. I always played guitar from the get go. It’s been very helpful, if you know what the other guys in the band are doing you have a better concept of where an instrument fits, when we turned into a 3 piece which was late 1979 then all bets were off and basically we all had this amazing freedom which you know really affected the way we wrote, we were all writing similar material but then it all went crazy from then on in.

Crazy in a good or bad way?

In a good way. When you’re playing in a 3 piece band there’s no safety net, you know in many ways – even technically, you can’t just go on stage and when someone breaks a string it not be a big deal, in fact I’ve noticed when a bands member breaks a string all of a sudden the rest of the band become better live, in a 3 piece group if something goes wrong the other 2 guys really need to step up their act.

Well you’re coming over from the UK and you’re coming to Australia for this tour performing alongside some other great acts, you must be pumped to get over here?

Yes. It’s been on our bucket list for an awful long time we’ve tried to negotiate this probably over the last 15 years and it never quite came together so when this came along we were like yeah we’re on board, absolutely. Raven has never played Australia, we’ve been in the vague neighborhood, we’ve played Japan 4 times, we were just in Japan back in April but never made it to Australia but here we come, we’ve been friends with Girlschool forever, we played with them back in 1982 in Europe, it’s going to be a lot of fun.

So you play bass, I wanted to ask you specifically about what bass/es you will be bringing over with you and performing on for this tour?

I just made a new flying v bass, similar to my old flying v bass, I ripped all the good parts off. I will definitely be bringing my trusty old red Explorer with the tremelo bar too, so probably that and my white flying V.

Wow a bass with a tremelo bar! And you built all these instruments you’re talking about yourself?

Well, the red one was partially built by me and I had a builder make the body who I had put all the stuff together. I’m just quirky you know. I use strange pickups and strange strings, it helps me do what I do…

Strange in what way?

Well I use very thin strings, my red Explorer has a guitar pickup on the bridge, so when I use a lot of distortion and stuff on solos I get lots of feedback, for the one with the tremelo I use a bunch of effects that helps me make the noises I do. You know you’ll get to see some of it. I’m sure I wasnt the first to do this, I know when I had mine done in 1981 I didn’t know anybody else who had one and it was about 3 years before KEIRLER bought there one out to the market. So I hadn’t seen any before. It’s not something your gonna use every five seconds, but it’s a tool you put a little bit of feeling into and add a little bit of hot sauce into the mix with.

Tell us a little bit more about if you will be playing any new music when you’re over here?

We will certainly be playing at least 1 track off the newest album, from the ExtermiNation record (our most recent one), and some old classics, it’s not a full set. I believe we’re playing about an hour show, action packed with what we’ve got.

I’m sure you’ll blow us away and you’ll give us your best. It’s gonna blow us away.
We’ll leave dust, destruction, and all that, that’s usually the way it goes.

Definetely make the most of the hour, make sure you get to use that tremelo bar for the people who are looking forward to seeing and hearing that in action.

Usually on an hour I don’t get to stretch out too much we want to play songs rather than screw around, if it’s a full set, we’ll have the trunkated version and we’ll go straight for the jugular.

Nice man just make sure you don’t do any 15 minute bass solos !

No, it’s never that long, I can say what I need to say a little quicker than that. I had a heart attack in 2017 so I make the most of every moment now.

I wanted to ask you about any changes in your current songwriting style, particulary with the ex- Fear Factory drummer coming on board recently!

It’s been interesting, we have a new album in the cart, we are waiting the mixes, we have a test mix which has blown us away, this album is different because previously every album we’ve done we’ve wrote songs and got together in the studio, and played it live so now we’ve been dragged kicking and screaming into the 21st century, because Mike was up in New York and we were down in Florida, we usually play in the studio, but he explained that and it made sense) that these days a drummer can lay down a track, he can build a click track with all the ups and downs and lots of speed variations to make it sound real, and he can have the ability to actually write parts rather than just ‘let’s see if I can get from A to B and that will do, so you know it does a rough idea then we can say ‘I wanna do this, and this goes ok, I want to do this, would you guys mind if I did this, so it’s a lot more creative, and when we heard what he done, I was like oh god this is unbelievable’ so that’s the way this has come together writing even now so that’s the way this has come together, we have an album in the can but, we are very prolific and have a repository of good songs, so after the Japanese and Chinese gigs that we were playing back in April we went to Los Angeles rang Mike and he wrote and come up with some really cool stuff it’s an ongoing thing and it’s exciting.

Sounds like you’re on a bit of a roll.

Definitely. There’s lots of good things happening with us, new management, renogatiated our record deal, the live album which I didn’t mention came out back in the end of January it’s a great transition piece, it introduces the fan to Mikes playing and hearing what the bands like right now.

Will you be filming any of your live content while you’re live down under?

Personally no, I’ll be too busy playing *laughs* I have no idea about that, with YouTube I am sure something will end up on there for sure, the whole concept of doing a live DVD thing is cool. The live album we did we didn’t even realise it was being recorded, but the guy -someone handed us the multi-track tapes after a show. There’s the factor of not knowing these days so it’d perfectly natural but uh at this point I would prefer people actually see us live rather than on DVD.

I did want to ask your thoughts on companies where you can pay to see a live concert but from your TV or your computer.

They always come up on YouTube and it always looks like a scam to me. Because we were on tour in the states and literally every show come up with that but it’s absolute rubbish because there’s nobody there filming it so it was all crap. But we will be a well oiled machine by the time we come to you guys. We start May 29th playing our first show in Mexico city then a couple more shows in Mexico then Brazil were going into Ecuador, Argentina fly to Brussels, play in the Grass pop festival and then flying to see you guys!

Any final words to say to your fans down under looking forward to catching you here?

To the fans in Australia – we thank you for your support and for waiting so damn long! We will see you and be there in person and kick your asses! 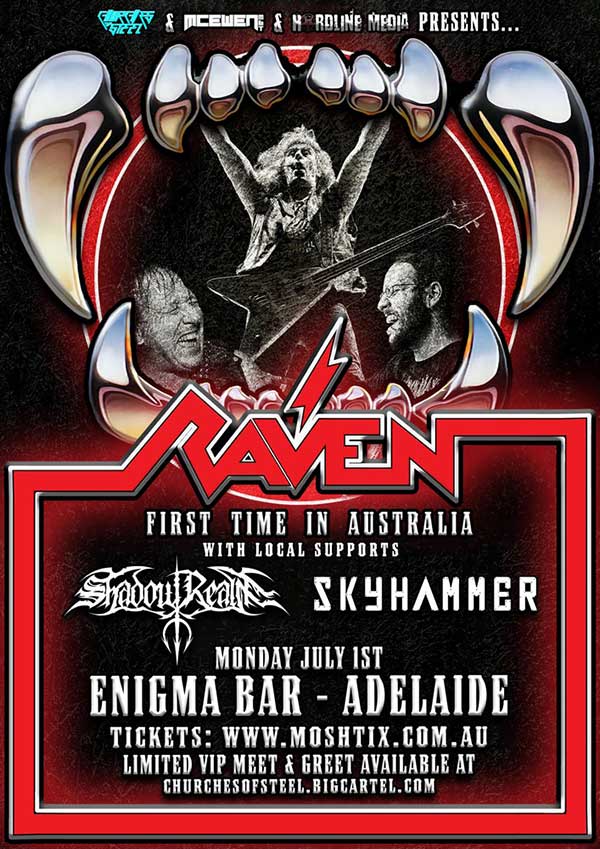 Get your tickets from: hardlinemedia.net/tickets

Photo by Magalie Aspeele. For illustration purposes only. No commercial gains.