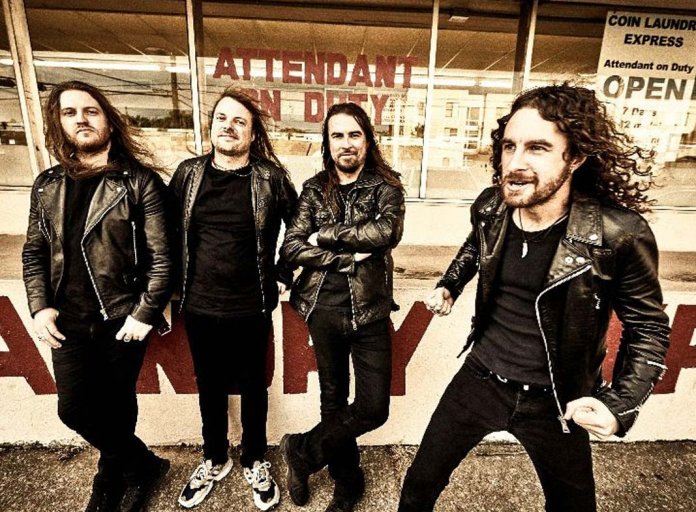 Aussie rockers Airbourne are set to release their fifth studio album Boneshaker on October 25 and will be touring heading back home Down Under in early 2020 supporting the legendary Alice Cooper and performing at the Summernats car festival in Canberra.

To find out more about the new album, and all things rock & roll, we had the chance to chat with Airbourne‘s guitarist Harri Harrison.

SR. Hi Harri, what city are you currently playing?

HH. I’m actually in Amsterdam, which is a very dangerous place for a band like us (laughs). We just wrapped a show, so I’m just sitting down chilling out a bit.

It has been great down here, and very cool to see so many people coming to see us, we have a lot of sold out shows, so we are super happy.

SR. We had the chance to check your new album ‘Boneshaker’ in advance, and you guys never disappoint. It’s pure old school rock with a kind of garage band vibe.  Can you tell me a bit more about working on the album? Did you guys do anything different this time?

HH. We toured until the end of 2017, so a lot of the lyrics and ideas for the album came while on the road having a beer or two, you know, using those moments with your mates to have a chat and see where we wanted to go with the next album.

After spending time with our families over the Christmas time, we had a vision to create an album super raw, especially because a lot of fans have been asking us to release a live album, so we went for the best of both worlds, a mix of live and studio.

We got to work with producer Dave Cobb, who clearly knew what to do, so from there all went quickly and in the right direction.

SR. Speaking about Dave Cobb, he is probably one of the most in demand producers around today. What do you guys learn from working with him?

HH. He is the man now! It’s all about the simplicity of what he does to be honest, the decisions he makes are not over complicated, which allowed us to focus in our music and you know “being a band”.

Dave quickly gets on top of everything and avoids doing so many tweaks, he is sort of an old school kind of guy, making decisions based on instinct, that’s why many producers want to do what he does now by embracing old techniques.

“…we are kids from Australia that love rock & roll, and we love meeting other kids who love rock, sharing a beer and talk to them…”

SR. We’ve seen you so many times live and you guys always have the same energy no matter the venue. What you like the most? small venues like The Metro in Sydney or big festivals like the recent Download festival in Australia?

HH. It’s gonna sound like a cliche, but I like both. It’s all about playing music with your friends, we have the best job in the world you know.

Obviously club shows are more personal and you can get closer to the fans and sometimes the energy is more intense as we are confined to a small space so we can see every single person there.

Festivals are just a different thing, as you play for fans and non-fans of the band, so it’s funny sometimes to see random people just standing there with their arms crossed next to fans that are going totally nuts, and also see a sea of people in front of you is mind-blowing.

SR. Speaking about your live shows. Joel is probably one of the craziest frontmen we have ever seen. We would never forget about him climbing the big towers at Big Day Out and play at the top, with all security around freaking out. Have you guys ever told Joel to calm down or being worried about his safety?

HH. Joel is Crazy! He climbs everything he finds. He really is like a little kid who cannot be told off (Laughs). 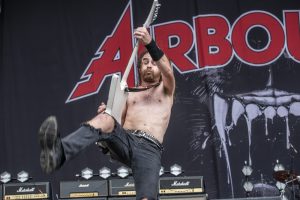 You have no idea how many times we tried to tell him to take care and not risk it, but he doesn’t listen. The funny thing is the venues and festivals we play try to wrap the scaffolding and any other potential thing that Joel could climb beforehand. Obviously, that doesn’t work against him (laughs).

I think that Joel being Joel, is what give us that extra rock and roll vibe, so let the guy smash a beer can on his head any time he wants.

SR. You guys are coming back to tour with Alice Cooper earlier next year. Have you meet Alice before?

HH. I haven’t meet him, but I know some of his band members and they are super nice guys. We are so excited to play back home in Australia, and opening for a legend like Alice is a huge honour.<

We are kids from Australia, we are rock fans and we grew up with Alice’s music, so touring with him is just a dream.

SR. One thing that makes Airbourne very unique is how down to Earth you guys are despite your success. You always have time for your fans, you don’t charge for meet and greets and overall you are super nice blokes. How do you guys have avoided to make the mistake of other bands by becoming rock Divas?

HH. First of all thanks for that! It means a lot for us. Secondly, that’s a great question.

We always keep each other in check to be super honest, as I said, we are kids from Australia that love rock & roll, and we love meeting other kids who love rock, sharing a beer and talk to them about AC/DC, Mothorhead, and other bands. For us it doesn’t matter where we are, we are the same as you.

We still call Australia home, we love coming back and reconnect, because that’s who we are, and be sure that we will be kicking each other butts if we start acting like Divas (laughs).

SR. Just to finish. Can you share with us any fun story that happened to you recently while on tour?

HH. I’ve one from a couple of shows ago actually. During the encore, I needed to piss so bad, and I was not very familiar with the backstage area, so i went to the toilet and got lost. When I finally found the toilet, I can hear the crowd cheering as the guys were about to start playing the last set of songs, and they clearly forgot to do a head count, cos I was still taking a piss.

Then I was rushing to head back to stage, and I could not find my way back, and when I finally did, I already missed part of the song. It was like a scene for Spinal Tap (laughs).