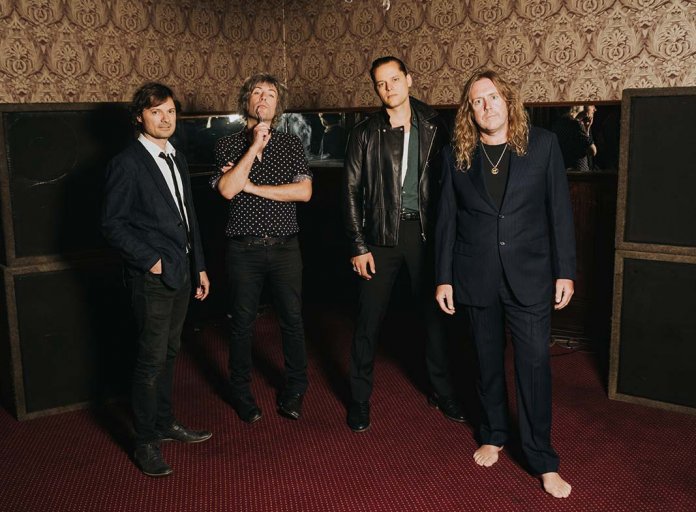 When The Beatles first stepped out onto the music scene in 1960, the world of music was forever changed. In the decades since, musicians the world over still look to them for inspiration. To celebrate the fiftieth anniversary of The Beatles’ Abbey Road, ARC – the supergroup comprised of Kram (Spiderbait), Mark Wilson (Jet), Davey Lane (You Am I) and Darren Middleton (Powderfinger) – will be touring Australia to share their love of the iconic album, playing the songs the way they were intended to be played!

Thanks to Live Nation, we got to chat with Darren Middleton about the tour, The Beatles, and all things music!

SR: What does being involved in this tour mean to you?

DM: It means a great deal. It’s something that came about … about a year ago I suppose, myself and my buddies in this little group ARC were chatting … I mean we always chat about music and what we love, and we were just like “You know what? Abbey Road is fifty next year. We should do something.” And then we didn’t do anything for a while. And then we just kind of thought about the idea of “Look, let’s put a show together.” This band was such a huge part of our lives in various ways. Musically, without a doubt, to everyone. So yeah, I’m really pumped. And for me personally, a couple of the guys in the band, they play a lot of these songs in various formats with other groups. I mean Powderfinger played a couple of Beatles tunes throughout the years, but not that often. So, for me, I’m totally pumped! I can’t wait to be playing these songs! They’re so good! And once you dive into the details of these songs … they’re just such an incredibly crafted group! It’s insane! And really hard! Really hard to play! [Laughs] It’s way trickier than the playing the old Powderfinger power chords! [Laughs]

SR: I can’t believe that! Surely not!

DM: [laughs] No, maybe I’m overstating or understating my old band of course, but yeah, it’s been … look it’s awesome diving into the details of The Beatles’ work.

SR: So, I take it you were always a fan of The Beatles?

DM:  Yeah, well you know what, as a kid not overly. As a ten-year-old not overly. My parents used to play The Beatles and Elvis and Shirley Bassey and Glen Campbell and all that era of music. But naturally, as a feisty eleven-year-old kid I didn’t like it by default. Just because my parents liked it basically [laughs]. So it wasn’t until I was about fifteen years old that I kind of went ooh, gee, this is speaking to me all of a sudden and from there it’s like … it’s a huge love affair when you dive into a band like The Beatles.

SR: Thanks for not pretending that you came out loving The Beatles from the day you were born! So many people say that.

DM: [Laughs] Yeah, I know! You know what? That is very true! A lot of people say that. I think well, hang on, your parents would have played it … you naturally do not like what your parents are doing. So, come on, tell the truth here! [Laughs].

SR: What do you think makes Abbey Road still so amazing today?

DM: I think, almost with a lot of their work, it can be deemed relevant in many ways. Abbey Road, it’s kind of a culmination … it’s a bit of an odd record, because the band were in a pretty bad place. And I wouldn’t necessarily say it’s a collection of great songs, because a few of the songs on there are to just get entries into a diary … are kind of glued together to make something work. And yet somehow it just works! Songs like Mean Mr. Mustard and Polythene Pam and She Came In Through the Bathroom Window – it’s kind of all joined together in a mishmash but they just work! Plus, I think the band are almost at the height of their powers to a degree here. There are some beautiful tunes on there and some real kind of mongrel as well.

SR: I’m not sure if you’ve seen or heard anything about the movie Yesterday?

DM: I know about it, but I haven’t seen it yet.

DM: It’s got something to do with The Beatles, right? Spoiler alert! [Laughs]

DM: Oh, that’s a good question. I think … the world … the world would essentially be the same with its turmoil and trouble and whatever else goes on. Musically … I think … well, who knows? It would have to be a little bit different. Many, many bands that followed The Beatles all looked at their work and their ethos towards music and … it was such an inspiration for so many people, so musically … man, I don’t know. [Laughs] I don’t know what it would be like. If we never had The Beatles, you’d never know that! You’d never miss it to start with. So yeah, it’s hard to know. Good question though.


SR: So, ARC – you’re all highly respected musicians coming from really amazing bands who have had a huge amount of success. How did this all start? How did you decide to get together?

DM: It’s a little group that I put together about four … four and a half years ago. Basically, Powderfinger … we played in South Africa for the World Cup – Soccer – a bunch of years ago. I became friends with a couple of the organisers of that event. And then I got a call about four and a half years ago saying “Look, we’re heading to Brazil and the World Cup’s happening. Do you want to put something together? Some sort of group? And I just came up with the idea of calling these guys, putting a band together. We’ll just play a few of our songs, we’ll play a bunch of songs we love, of Australian and New Zealand artists. We got back from that trip and just kind of went – we all knew each other, but we’d never really played together – and we got back and went “That was so much fun! This is one of the best bands we’ve ever been in” because there’s no political issues, there’s no issues! Just people getting together for fun! Like when you start a band before it becomes a business or becomes big. And yeah, we got back from that and we kept going. We flew under the radar for a few years. We’d just do little shows here and there. Just the last year or so we decided to head a bit more publicly. We’ve started writing a couple of songs together as well which we’ll hopefully dive into as well. It’s a very, very fun group!

SR: So, it wasn’t too difficult getting on the same page musically? It just happened and it worked well?

DM: Exactly. It was very natural I suppose. When I called the other guys – Mark, Kram and Davey were the first three people I called, and it didn’t take too much arm twisting to say “Do you wanna join this and we’ll go to Brazil? What do you think?” [laughs] everyone went “Yes and Yes” [laughs].

SR: Fantastic! So, what can we expect from the tour – aside from the obvious?

DM: Well, it’s built on the four of us, but we’ve got a whole bunch of guests coming. Basically, you’re going to get a band playing a band’s songs the way it should be played. I know people have done Beatles things in the past and White Album shows and whatever and it’s very … there’s a few handpicked lead singers behind you know, kind of session bands reading from charts and doing whatever they need to do. But that’s just not The Beatles to me. We’re gonna give it a good kick in the arse. In a totally respectful way. But we’re gonna play it like a band would play it.

DM: [Laughs] And then also, after Abbey Road, there’ll be like a second set and we’ll throw in some Beatles surprises from that point onwards.

SR: Oh, fantastic! And, so when this tour is done, does the band have plans to take on other classic albums and tour those?

DM: Look, we talked a lot about that when we were putting this Abbey Road thing together. So, I guess we’ll see how it goes. And if people are interested then yeah, we have a couple of ideas on the table!

SR: Great! So, I know Twisted Sister and AC/DC were inspirations for you. Would you ever consider doing something of theirs?

DM: [Laughs] Ah, my god, the wonder of the internet, once it’s out there [laughs] … mind you, I don’t deny it. I mean, I’m not one to try and hide that sort of stuff. I was into some pretty bad music as a fourteen-year-old … a teenager. Never will we do Twisted Sister. They honestly don’t warrant it. They haven’t had that great a career or a lifespan. AC/DC on the other hand are an amazing band that have made many great records. But, you know, who knows what we’ll do, we’ll chat about that hopefully [laughs] next year.

SR: I was reading that you taught yourself to play guitar. As someone who has tried and failed to do that on multiple occasions, I’m so fascinated by this! Is there a secret to it?

DM: Well … look, it really is commitment and practice. I did have about two months of guitar lessons, to sort of … to teach me the basics. There are, like anything, basic, rudimental things. And then from there, I bought music books and guitar books. I’d just listen and learn to work stuff out. When you work anything out on your own you kind of get an ear for it. I think it’s a good way to approach anything: to learn the fundamentals and then apply yourself to it. So that’s all I did with guitar. And practiced a lot.

SR: And having the skill for it probably helped a little.

DM: Well, having the roots in place, being able to play it, you know what I mean? Like knowing where to put my fingers and I’d work it out from there.

SR: We’ve kind of touched on this already, but what would you say to convince someone to come along to one of these shows?

DM: Just that it’s gonna be the gig of the year, basically. It’s a celebration of probably the greatest rock and roll band the world has ever seen. So, who wouldn’t want to go to that? [Laughs]