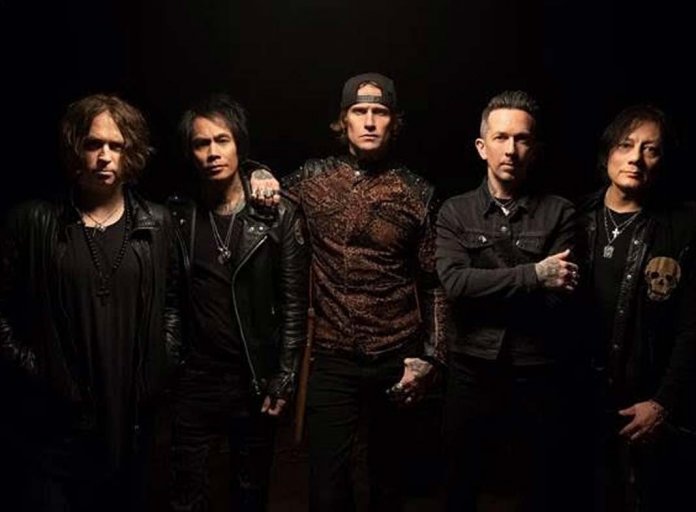 Californian rockers Buckcherry have been melting faces with their hard, heavy rock riffs since the mid 90’s and their latest record Warpaint is no exception to the legacy. Fans are ready and excited for Buckcherry’s Australian tour with Hardcore Superstar happening later this year.

Thanks John Howarth of Nuclear Blast, we got the chance to chat to guitarist Stevie D about the new album, the bands dynamic changes and the tour.

SR: Your new album Warpaint, it’s just so good. It’s like with Buckcherry, you know what you’re going to get, which I really, really love. Have you been happy with the reception it’s gotten?

Yeah, I mean, of course, there’s always room to grow. But yeah, we took some time off. And we needed to regroup the planet banded, splintered after the last tour was a it was a tour of diminishing returns, we had toured so much that we had burnt out a lot of the markets out there. So it was suggested to us that we needed to take a break. So we took a break and in the interim, Josh told me he wanted to keep working. So we started another band called The Conflict. And we went out and did that. Having done that, and coming back and now this is three years has gone by and then and then Warpaint comes out.

It was a fantastic reception everyone with, you know, welcomed us with open arms, we had some new players, the shows have been sold out and capacity. So we’re really happy with where we’re at.

SR: That’s awesome. So, you know, it has been a few years since ultimately that the band split. Do you feel like it was enough time for you guys to move on? And how is the progression with Warpaint and also in a live context to like how has everything changed and how you moving forward from it?

The dynamic is a little bit different obviously because now it was Keith’s band and I kind of picked up where he left off. And not that it’s any better or worse -my job description is different. And so my days are busier and my workload is a bit more but I love guitar, I love what I do. I love this band, and I really understand what this band is about. What the spirit and the motivation and all that so I’m happy to do it because I love I love this band.

How it has changed is not for any better or worse. There’s a couple guys that left and the new guy we had already known since the early 90s. And we at one point, we’re all sitting around drinking and getting loaded, and Josh and I had an apartment in Hollywood, and everyone would come over and this particular night, Kelly Lemieux came over and all of us are sitting there. If you would have told us that we were going to be in a band 20 years later, I would have laughed in your face. But yeah, these guys are super cool. I mean, it’s got to be about the hang, you know, we could have called anybody, but we call these guys because we already know that we could do a lot of miles with them.

We spend the majority of our time with them to even more than our families. So it has to be something pretty cohesive. These guys are fantastic.

SR: Your Australian tour is only just been announced. Your tickets go on sale in a couple of days. And it’s been a couple of years since you’ve been here. What are you most looking forward to doing coming back?

Well, for me, that’s ground zero for our type of rock and roll, you know like AC DC. They’re from there. They’re the gods, you know, and that’s something that you guys, have grown up with that in your fabric, in your landscape and environment. You know, that’s the soundtrack of most rock and roll growing up, so I’m just really looking forward to playing for those audiences again. Like we see the faces light up because it’s already familiar to you guys. Even though a lot of you haven’t seen us, you guys know us. It’s familiar territory.

SR: So as you said, you see the the faces light up at the concerts, for the fans who may not have seen Buckcherry play before, what would you say to them to encourage them to come to your tour?

If you like, hard high octane rock and roll guitars, and an unstoppable show, then this is a show for you. Especially with us touring with Hardcore Superstar, they’re cut from the same cloth, they’re our brothers from another mother. So you’re going to get more than two hours and it’s a lot of fun. You know it’s all rock and roll. So, you know if you like that high energy, you know a good time, and this is a show for you.

SR: Are you looking forward to touring with Hardcore Superstar again?

We’ve only done one tour with them. So it hasn’t, it hasn’t had a chance to become much more than it is. We did a UK, Europe run and I would watch them every night. They are engaging, and are a fun show to listen to and watch and they couldn’t be nicer human beings! So yeah, I mean, to give you an idea, our bus broke down in the middle of France. We asked their bus to stop and help us and then our band got on their bus. And then we drove all the way into, I can’t remember somewhere in France to actually finish the show.

But yeah, they’re that nice people see and like, that’s what like rock stars should be about. Like I feel like the whole dynamic of everything from like, the 60s to now has just changed and it like used to be all for the fans and now it’s like… please let me make money and it’s so rare now to find a musician that does this, you know, for the love of it. I’m not gonna lie… I mean, it’s how it’s done. I put food on the table. But I’m really grateful and I’m really aware that I get to do this. It’s not a free ride, you know?

I do this because I love it. I love to play, and so does everyone in this band. So that’s important.

SR: Do you have a new favourite song that you are loving to play live at the moment?

My absolute favourite song to play right now is a song called Back Down. It’s got a Black Crowes, The  [Rolling] Stones vibe and the riff, you know, open G tuning – that usually that was Keith Nelson’s job to do with the open tunings and slide and so the fact that I get to stretch out and play in that, in that vein, it’s just fun. I wish I would have done it a lot sooner. I conjure up my inner Prince, do my best and do my best Purple Rain impression.

SR: If there was any song out of your discography that you would name your biography, what would it be?

You know, it’s like my whole career. I don’t know. But I can tell you what Warpaint can easily describe.

Personally, what I was going through in the last few years, the last couple of years, there was a lot going on in their professional lives. There was a lot going on and personal lives and my personal life that you had to suit you know, make your next move. Like I didn’t know what to do next. So suiting up, and just showing up was difficult. But you have to do it if you want to keep working, you know, you can’t just stop living. So you have to meet whatever challenges you have, you know, by suiting up and showing up and putting on networking, you know what I mean?

It’s like, I don’t know. It’s all about the hustle. I have a four year old son, and
he’s amazing. And my family the dynamic has changed for me. You know, like before, it’s just like, I had a guitar. I have a career now. And, you know, let’s go out get a bunch of guitars or whatever.  Now it’s like, you know, I have a wife and a child that I don’t want them to know this my struggle. I don’t want them to have to want for anything. So I go out there and hustle and do whatever I need to do, shut my mouth and just bring all the good stuff home.

SR: So my last question for you, what song do you wish you’d written what would it be?

Oh man, there’s so many so many like all of them.

Like, what? Like what catalogue? Like every Beatles song every song ever written?…Why not, like Prince, I could go on and on but you know, I gravitate towards those classic poignant, meaningful songs, those are the writers that have really made a difference to me.

Catch Buckcherry on their Warpaint tour this October!