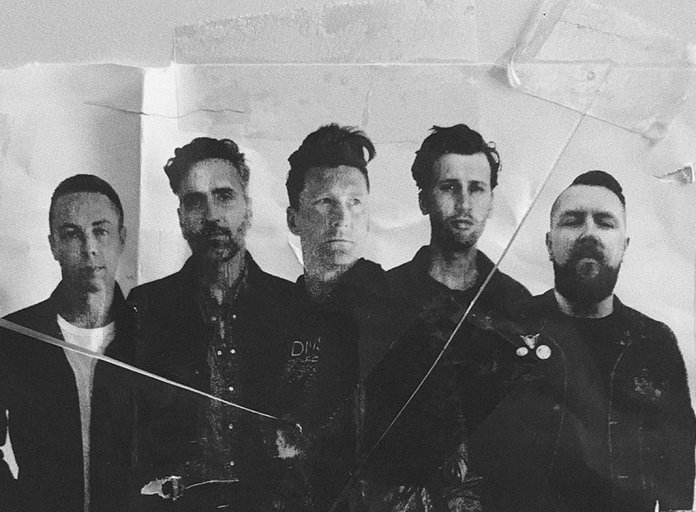 Back and ready to rock! Anberlin have graced our shores after travelling all the way from the U S of A to stage dive towards us at just about all states here down under. Anberlin are here to show off their latest original music while also performing hits from the vast collection of their many older fan favorites, we are lucky enough to have an exclusive interview with the drummer Nate Young of Anberlin in regards to this current Australian tour for which they are performing an absolute bucket load of smash hit songs from their back catalogue once again to seas of screaming

So we’re here in Australia…to chat about the tour your band Anberlin is currently well underway on… you must be pretty pumped about it right?

When was the last time you were over here before this?

Tell us a memory of the last time you were here in Australia?

It was amazing, so much fun and I feel like at that point in time we never really thought that we would come back, so it’s pretty crazy to be in this spot and we’re just so pumped to be able to return.

Will you be playing any new music?

Yeah, we’re trying to play a good mix of things across the board, our biggest thing was that we didn’t just want to come back and play stuff off our last record. The whole point of this is just to have SO much fun you know. So yeah, that’s why we were going to be playing a good mix of the older stuff and of course well play some new stuff; there is some focus on that for sure.

Awesome man sounds good, like there’s something for everyone. You’re of course the drummer, is there any new equipment that you are using personally?

I was playing Ludwig which was my main company. For the drum vinyl cymbals and Vic Firth sticks. With a Remo head.

Who are your biggest influences as a drummer?

Oh man, so many, I mean growing up Dave Grohl was one of my favorites he just hit hard and he’s just a good all-around rock drummer. He’s one of the bigger influences on me as a drummer for sure.

What advice would you give to young artists and bands that are just starting out and trying to get out there?

I would say in this time of music. Keep it going. It seems like so much has changed, everything is just being cranked out constantly & there’s a lot of the same sounding stuff. I would say like find your own thing, really push it and open up to different styles, especially when you’re starting out; you have the choice to establish yourself. I would say the best thing is to not just try and like stick to one thing, try to push yourself, I would say stand apart if you can try your hardest to kind of mix it up, change it up and try different things. Don’t expect to get big quick either man, no one wants to do the long haul and everybody wants to just put out a couple of songs and if they don’t get big from it bail. It’s important to build an actual fan base where people care about what you’re bringing out. Don’t focus on being the next big song out of nowhere.

Where is your favorite place to tour out of all the places you’ve been across the world? Is there an absolute standout?

Honestly man and I’m not just saying it, Australia has always been the best spot for us. It just feels like a second home. Australia for sure. It’s fun. We’ve been there like 13 times the crowd is killer. I love walking around the cities.

I don’t know I feel like we’ve had so many good shows over the years there. I feel like I don’t know if there’s ever actually been anything that’s been crazy that’s happened but I just feel like. Not more than playing so far away from our home. It blows my mind. I feel like someone else in our band would be able to rattle off something crazy that happened but I mean one time we played two shows in one day and that was kind of brutal once when we were trying to get in front of many people as possible.

Was it in the same state?

It was a couple of hours away we had to play load up and get to the other show.  If you could collaborate with any other artist as a drummer for them perhaps or if you could have them work on an Anberlin track who would it be?
Oh man that’s a good question. I don’t know, there’s a lot of different artists and stuff, but I don’t know if they would fit with Anberlin as well. I really like 1975 right now. There always doing rad stuff. That could be cool. I feel like at the moment there’s not a lot of rock bands that would flow with and match with our style.

What’s your final message to your fans down under?

I would just say thanks I mean it’s crazy that we’ve been away for this long and that we can come back and have a good time and have a good response. The fact that people still want to hang with us is enough. So for us, I mean we can’t say thank you enough.

Don’t miss Anberlin touring across Australia this final week of May spreading their sonic waves throughout the many states of Australia from city to city, with so many pit stops across the board, there’s no excuses for fans to miss this once in a blue moons opportunity. Who knows when Anberlin will next be back after this, if at all!

Get your tickets now: sbmpresents.com/tour/anberlin