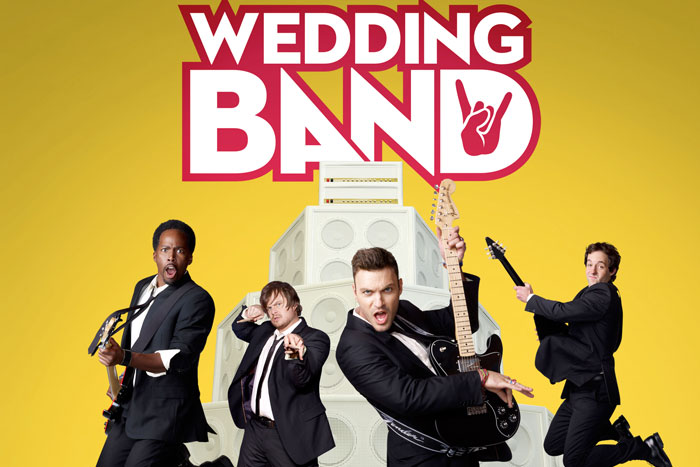 By The Madrina
Thanks to Roadshow Entertainment, we had the chance to see a fantastic, fun and feel good comedy drama called Wedding Band.

Created by Darin Moiselle and Josh Lobis (South Park) and produced by Emmy award-winning Mike Tollin (One Tree Hill, Smallville), the series follows four American guys who spends their spare time and spices up everyday life by performing in a Seattle wedding band known as ‘Mother of the Bride’. Anchored by lifelong best friends Tommy, a perennial bachelor, and Eddie, a married father of two, the guys (including Eddie’s brother Barry and a new recruit Stevie) are weekend rock stars.  Not only are they paid to perform at the best events in town, they live it up in every occasion as the drinks are free, the bridesmaids are groupies and they get a taste of the fame dream as the centre of attention.

However, their tendency to get personally involved with the people whom the event is for always lands them in trouble with their new employer, the esteemed Rutherford Events. Whether it be try-ing to get back with an ex-girlfriend on her wedding day, helping a couple in an arranged marriage to meet before their ceremony, or making the hosts of a divorce party remember why they fell in love. The band will stop at nothing to make every wedding, birthday or bar mitzvah a night to remember. Brian Austin Green (Beverly Hills 90210, Desperate Housewives) does a wonderful job as Tommy, the lead singer of the band (aka the Troublemaker and Heartbreaker), lending his own impressive vocals to every song cover in the show.  Peter Cambor (NCIS: Los Angeles) dons a responsible dad who yield to his inner child sometimes, against his detective wife Ingrid’s (Kathryn Fiore, Mission Impossible III) wishes. Derek Miller (Transformers: Dark of The Moon) plays the drummer always wanting to be cool (having grown up in his brother’s shadow), somewhat imitating Jack Black’s style in both appearance and attitude; and Harold Perrineau (Zero Dark Thirty) nails the new smooth band member who used to be a session musician and knows a famous name or two in music such as Courtney Love, Train etc.

The female characters on the other hand, are quite flat and dull (nevertheless pretty!), starting from Rutherford Events’ protégé Rachel (Jenny Wade, No Reservations) who lacks personality to create a memorable presence on screen. Secondly, Eddie’s wife Ingrid fails to convince us she is a tough one at work as she appears to be an ordinary woman attempting to assert more control in life at home. Thirdly, though Melora Hardin (The Office) put on a good performance as the all-knowing, ambitious and competitive Roxie Rutherford, her portrayal of the modern boss woman is very predictable and one-dimensional. Yet these flaws can be overlooked as this show is essentially about men in a band.

Speaking of band, each episode includes a catchy and unique cover of a popular song themed to the event they are playing like Making Love Out of Nothing At All for a wedding, Time of My Life for a prom party or Get Down On It for a bucks night. Some may think this effeminates a male band but in the words of Tommy in the show, (being a wedding band) “they always play to a packed house and everybody knows the lyrics.” At least they are realistic and honest about what they want to achieve.

As New York Daily News describes the show perfectly, “the jokes flow nicely, the music is fun, and the pop culture references will make almost everyone smile.” Our favourite episode is the band’s clash with 4 young Backstreet Boys wannabes (sound familiar?) in being a wedding party’s main act.

Overall, Wedding Band is a highly entertaining series that will have you singing its cover tunes at the end of each episode (cheesy yet addictive!) It can drag on at times but you can forgive it for the good vibes it generates and genuine fun it reminds you you have at all kinds of events this show covers.

Wedding Band is available on DVD in Australia on 6 February 2013.