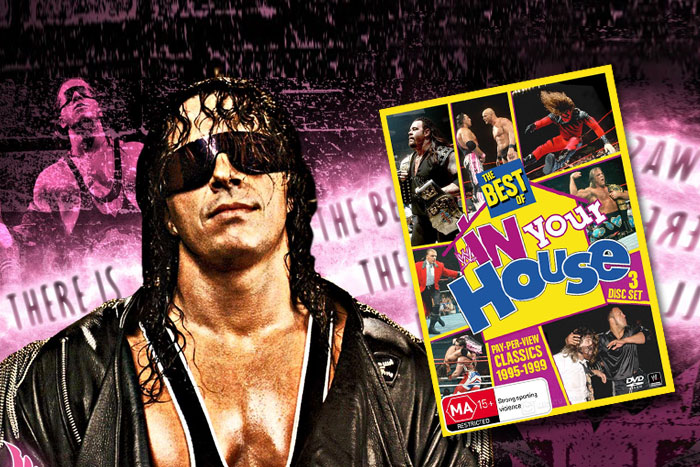 Thanks to Shock Entertainment we had the chance to begin our series of WWE reviews, with The Best of WWE In Your House on DVD.

The Best of WWE In Your House was one of the most famous Pay-Per-View events in WWE history, screening between 1995 and 1999, and broadcast monthly between the WWF’s top five events (namely Royal Rumble, Survivor Series, WrestleMania, SummerSlam and King of the Ring).

One of the best things about this series is the chance to see the origins of some of the biggest WWE superstars, such as Stone Cold Steve Austin, back when he was a villain and not a fan favourite (weird, ah?), and Hunter Hearst-Helmsley (nowadays known as the mighty Triple H – an abbreviation of his original name). We also get first look at some of the most memorable match types, including Mankind vs The Undertaker in Buried Alive, one of the best fights in WWE history. This was also the era of Bret ‘Hitman’ Hart, and we get to see this wrestling legend at his best, alongside his family from ‘The Hart Foundation’ in an all-star match against Stone Cold, Ken Shamrock, Goldust and LOD – a match that goes forever, and serves as a wrestling lesson for upcoming generations.

The Best of WWE In Your House is a marvellous trip back to perhaps one of the best years of the WWE, when the real show was in the ring, with awesome stunts and fights and less of the soap opera-ish speeches and drama that have taken over the iconic federation. Back in the day, the stories and plots were simple enough to create amazing characters – heroes and villains who solved everything with their hands in the ring, and not with speeches that stretch over several minutes. Matches such as Bret Hart vs the British Bulldog for the WWE title, Shawn Michaels vs Diesel and Mankind (real action taken to the extreme), Mankind vs Ken Shamrock back in October 1998, and Judgement day ‘Victory at all cost’ show how the real pros did it, and serve as masterclasses for all the new generations of superstars. No wonder many of the characters of this era are now part of the WWE Hall of Fame or still idols in the ring.

The 3-disc DVD includes almost 9 hours of action, with sharp, video-quality matches, iconic superstars and the adrenaline that made an entire generation of wrestlers famous in order to put the WWE at the top.

The Best of WWE In Your House is now available in Australia and is a must-have for all WWE lovers, especially nostalgic old -school fans wanting to see Stone Cold, The Undertaker, Vader, The Rock, The Hitman, HBK and Mankind back in the ring!