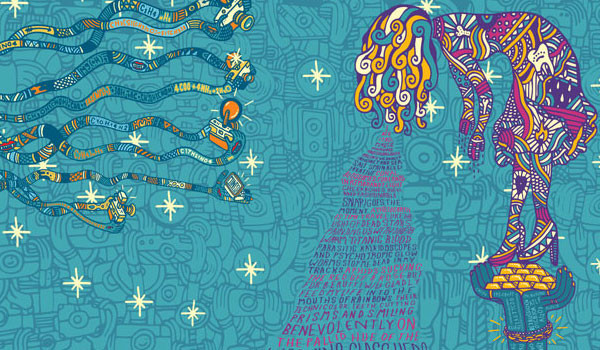 It has been three years since American band Foster The People released their successful debut album ‘Torches’ with hits ‘Pumped Up Kicks’ and ‘Houdini’ creating airwaves across the globe. They are back with their long awaited second album ‘Supermodel’ which is out now through Sony Music Australia.

The first track on the album ‘Are You What You Want To Be?’ features guitar heavier sounds that hints toward a West African inspired sound. ‘Ask Yourself’ juxtaposes what sounds like a pop song with its upbeat melodies and hooks to the dark and sinister meaning of the song that talks of “coughing blood”. Similarly, many other tracks on the album incorporate uplifting rhythms and beats yet encased in the lyrics are deeper themes that hint toward mental health issues as in  ‘Pseudologia Fantastica’, and the negative impact and cost of capitalism on society as in ‘A Beginner’s Guide To Destroying The Moon’

Their debut single off the album ‘Coming of Age’ is no ‘Pumped up Kicks’ – yet it is a great follow up with similar pop sensibilities that will see it have a similar effect on the radio and commercial success as their first hit.

While Foster the People’s formula of mixing indie pop and electronic synths has stayed very much the same on many of the songs such as ‘The Truth’ – the overall sounds on the album are a lot less electronic. Reducing digital synths dramatically has seen room on the album for  their stripped back songs ‘Fire Escape’ and ‘Goats In Trees’ that resemble songs that one would find on a Death Cab for Cutie album. In addition these two songs have really highlighted front man Mark Foster’s poignant vocal ability.

Even though Foster The People use the same formula of mixing a whirlpool of genres and blending it with guitar heavy melodies and analog synths to create eccentric pop anthems – they have not tired out their successful formula, delivering a phenomenal collection of alternative pop songs.