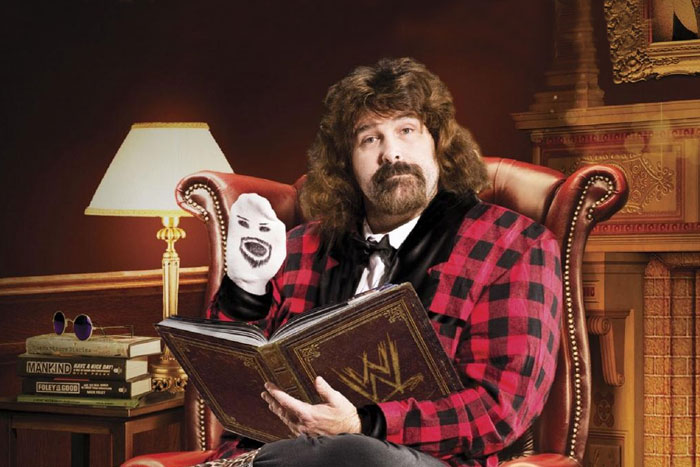 Thanks to Shock Entertainment we got our hands on one of the best WWE DVD’s we`ve seen in a long time. For All Mankind: The Life and Career of Mick Foley is a 3-disc home entertainment release featuring the wrestling legend alongside his friends (including some well-known current and past wrestlers and musicians) and family, and his journey to becoming one of the biggest WWE superstars ever. Mick Foley without a doubt is a name that is synonymous with wrestling royalty, effort and modesty. Foley is a man who created his own career path. From his living room with his mates, he created alter ego Dude Love, his crazy hardcore identity, Cactus Jack , and went all the way to the top of the WWE as the mighty Mankind, a beloved villain who became a true hero for many generations.

The 3 DVDs bring the best of the best of Foley, including some never-before-seen footage, such as his first days at wrestling boot camp (driving for hours from New York to Pennsylvania every weekend to learn from one of his idols, Dominic DeNucci.) The DVD footage shows the many years of hard work that gave Foley the chance to leave the independent federations and join CWA, WCCW as Cactus Jack Manson, making a name for himself until the WCW finally called him.

One of the best fights ever is the one against Sting, the WCW champion; and, despite losing, Foley made a name for himself in that federation. However, the footage that most shocked us was of the crowd during the most brutal battle of Foley vs Vader in Germany, where the ropes were not properly set up. Foley, in one dangerous stunt (the hangman), got his head tangled between the top two ring ropes, lost two-thirds of one of his ears and had to be rushed to hospital for surgery (all captured on video.)

Obviously the documentary ends with Foley joining the WWE, becoming a true idol as Dude Love, Cactus Jack and Mankind, and going from villain to hero. He then becomes The Rock‘s nemesis and, later on, he and his tag team partner become champions. Great moments from the DVD include: the genesis of Mr. Socko – a silly prank that Mankind played on Vince McMahon while he was in hospital; when Foley became champion, with the support of the iconic Degeneration X; and the most dangerous fight ever staged against The Undertaker (in the Hell on a Cell Match at King of the Ring 1998, where Foley was badly injured but still left the ring walking).

There are also memorable moments of his comeback as a commissioner, along with his recent appearances fighting against Randy Orton and teaming up with The Rock once again.

The end of the documentary focuses on Foley’s personal life, his charity involvement and his career as writer and stand-up comedian. And despite the pain resulting from all of the injures all over the years, Mick goes everywhere with a big smile, now as a true WWE Hall of Fame member.

For All Mankind: The Life and Career of Mick Foley is a MUST HAVE for every single WWE fan. It is a story of sacrifice, where you can see that not all is fake in the ring. And you will experience the pain and the unique style of a wrestler with many faces – a truly unique legend.

For All Mankind: The Life and Career of Mick Foley is out now in Australia…Get your copy now!