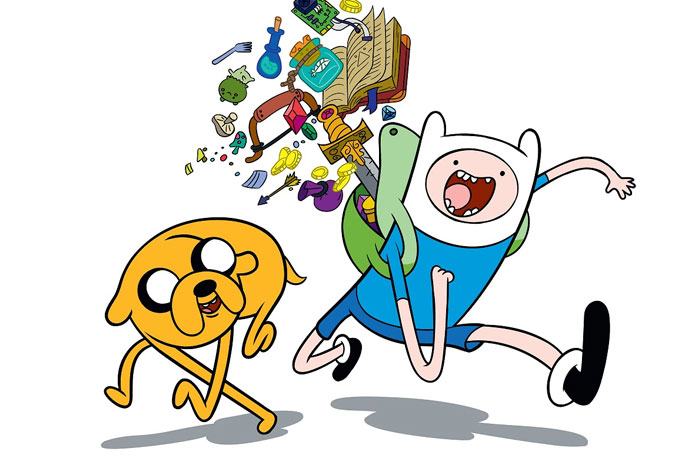 By The Walking Said
Thanks to Madman, we had the chance to see the first season of Adventure Time.

If you are not familiar with Adventure Time, it is a cartoon show that follows Finn the Human (Jeremy Shada) and his best friend Jake the Dog (John DiMaggio) as they quest across the Land of Ooo. They have a regular rivalry with the Ice King (Tom Kenny), who kidnaps princesses to be his bride. More importantly, he focuses most of his attention on the lovely Princess Bubblegum (Hynden Walch), who is almost as happy to have Finn rescue her from the Ice King’s evil plots as he is to rescue her. Other recurring characters include Lumpy Space Princess (series creator Pendleton Ward), video game machine Beemo (Niki Yang), and Marceline the Vampire Queen (Olivia Olson), who drop in on Finn’s adventures from time to time.

What sets this show apart from the others is its boundless creativity in the universe the show takes place in, which is filled with hilarious riffs on every kind of fantasy trope a D&D player can imagine. It’s not every day you get to see a storm in which knives rain from the sky, or a goblin that torments one of the heroes with a laser pointer, but that’s the kind of thing Adventure Time packs into every episode. The characters each hail from their own section of Ooo (as glimpsed in the title sequence), from Princess Bubblegum’s Candy Kingdom, to the “City of Thieves” featured in an episode of the same name, which is as advertised in a way that is both logical and utterly absurd. The art style is simple yet detailed, with every nook and cranny filled with additional bizarre jokes, including a wonderfully evocative and unusually dark back story that younger fans won’t even notice.

Extras and bonus features include commentary tracks on “Trouble in Lumpy Space,” “Prisoners of Love,” “Tree Trunks,” and “Ricardio The Heart Guy,” a nine-and-a-half minute Behind the Scenes featurette where Pendleton Ward wanders around the Adventure Time studio with a steadicam as weird things happen in the office and a two-and-a-half minute Behind the Scenes of the Behind the Scenes Feature, Animatics with commentary for episodes “The Enchiridion!” “Rainy Day Daydream,” “Slumber Party Panic,” and “Dungeon,” a music video, Finndemonium which features music from the show, fan art, and people in costumes at conventions, and the two-minute animated short “The Wand” where Finn and Jake team up with The Ice King to stop a haywire magic wand.

Adventure Time is constantly bursting with imagination, sweet, and jam packed with a ridiculous sense of humour. It is no wonder that it quickly became a runaway hit on Cartoon Network with kids and adults alike.

Madman brings the first season of Adventure Time to Australia on DVD, a show as weird as funny at the same time and a must have for all the fans of the show.