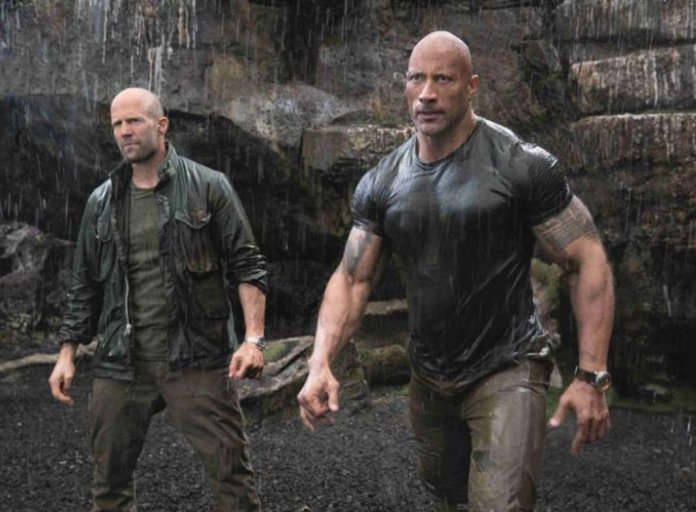 When the Fast & Furious series turned into a cartoon fantasy with episode five, it sucked a lot of people into its fandom. With that giant-safes-pulled-by-cars chase and the addition of Dwayne “The Rock” Johnson, you knew for certain that these films weren’t taking themselves even slightly seriously anymore, and you could have an easy, guilt-free chuckle while enjoying the mayhem. 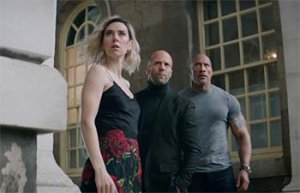 Hobbs & Shaw takes two of the standout side-characters of the series, played by Johnson and Jason Statham respectively, and makes them reluctant partners in a hunt for a virus stolen by an MI6 agent (Vanessa Kirby) who has been framed during a heist by Brixton Lore (Idris Elba). But the plot is basically irrelevant, an excuse to string action scenes together.

Directed by Deadpool 2‘s David Leitch (with an appearance by Ryan Reynolds), this film takes a similar approach to a Bollywood spectacular, by taking everything the writers think is cool and throwing it on the screen with merry abandon. Idris Elba is not just a villain, he’s a cyborg super-soldier. The other sneaky influence in this film is the silent era, recalling implausible, elaborate physical comedy like The General. Some of the action is specifically shot as comedy but there are action scenes in this film so ludicrous and convoluted that they are genuinely hilarious. 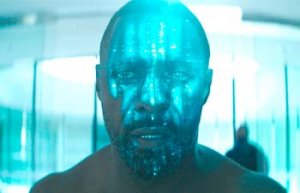 The real delight of the film, though, is the chemistry between Johnson and Statham, who’ve just become the Laurel and Hardy of action movies. They insult each other with such verve that it lends the film some of the charm of classic ’80s fare like Commando and Lethal Weapon. They are so funny together that you want the action scenes over to get back to the banter. This is, in fact, the main problem of the film, that action so utterly bonkers actually plays second fiddle to the comedy. You can have too much of a good thing, and I hate to say it, but the film is just overlong. Because of the sheer, weightless implausibility of the action and the impossibility of either lead getting so much as a bruise, the film definitely lacks the tension required of it. Luckily, just when you’re looking at your watch, it reliably hauls out something entertaining and sucks you back in.

There’s the usual Fast & Furious theme of family, and we get to meet Hobbs’ extended Samoan clan, presided over by a delightful grand matriarch (Lori Pelenise Tuisano). Helen Mirren is there to give Shaw some of his own family fun, and she’s as good as expected.

All in all, this is good fun. If you’re a fan of the series since it went nuts in episode five, then you’ll have a great time. Take some like-minded friends with you and you’ll spend half the film exchanging “can you believe this?” glances. What more could you really want from a film like this?