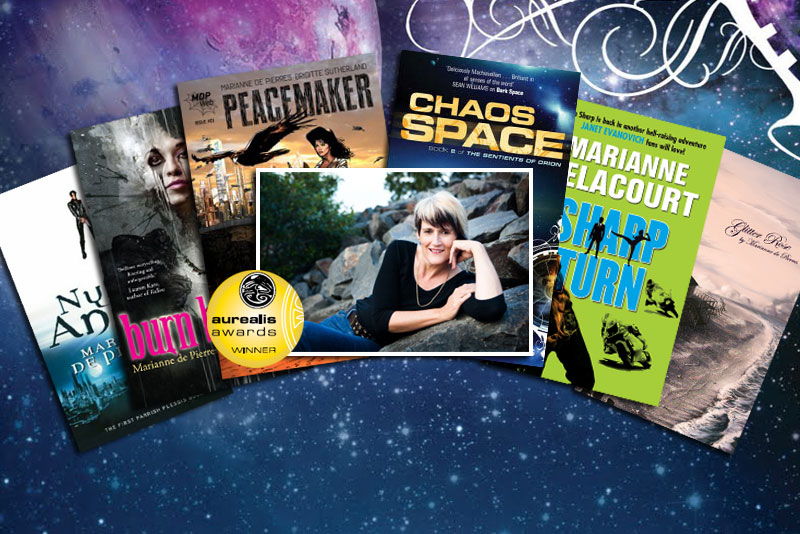 Spotlight Report is thrilled to present an exclusive interview with acclaimed Australian science-fiction writer Marianne de Pierres who has kindly agreed to answer some questions for all her readers. De Pierres attended Supanova pop-culture expo in Sydney a couple of weeks ago and recently released her latest project, the web-comic Peacemaker with Australian comic-artist Brigitte Sutherland.

If you wanna get to know Marianne de Pierres a little bit more or you are just a huge fan of her work check our interview below:

For those who haven’t read your books, could you give us a little description about your work? An introduction to my books means that you’ll probably have to choose whether you want to read a science fiction, crime or teen novel.

If you’re a science fiction reader you would definitely start with my first series Nylon Angel which is a post-cyber punk action-adventure set in near future Australia. If you’re more into reading sweeping space opera my second series Sentients of Orion is a 4 books series that takes place over numerous worlds in the Orion constellation and is a big social-political drama.

My teen novel, Burn Bright, which is only just recently been released, is actually readable for any age but the main character is a teenager. It’s kind of a dark, gothic fantasy.

On the other hand I also write humorous crime, along the line of Stephanie Plum, Janet Evanovich series, but my protagonist is actually an Australian and it’s set in Perth. So, as I said, it depends on what do you want to read!

About your Parrish Plessis series. It has been translated into 8 languages and adapted into a roleplaying game. That’s massive! Have you played the role game? I’m not much of a game-player in general. My sons tried to teach me because it is a dice game, kind of like Dungeons and Dragons not a computer game… and I just found my brain doesn’t seem to work that way. White Mice Games did it all themselves without much input from me and I was very pleased with the final product. Can you give us and advance of Peacemaker? “Peacemaker” is a novel that I’m writing and will be my new science-fiction endeavor. It’s a science-fiction/fantasy/western set in Australia. I’m kind of half-way through writing it. As I started writing it, I also start developing a web-comic, and somehow the web-comic evolved further and faster than the book because I have a lot of other writing commitments. So as of today, the web comic will be available online. The artwork is done by Brigitte Sutherland who is a fabulous, young Australian comic artist.
I think it’s a little bit different because it’s a Western but in a way that has never been done before, because of the Australian component in it.
You can find it on my website: www.mariannedepierres.com/peacemaker

Congratulations about your Aurealis Award again. How do you feel to kick that goal? I’ve been nominated 6 times for Best SF Novel and I didn’t believe I would ever win it. But look, it was great being shortlisted. People often say that it’s an honour just being shortlisted on an award, and it is. What a compliment to be recognized as writing one of the best 4 Science Fiction novels in Australia for that year. The win though, was very special for me because it was the 4th book in the series. It’s pretty hard to win an award for a 4th book in a series. It gave me huge satisfaction to know that I delivered on my ending.

My original idea was that I wanted to write a novel about what happens to women and children in war time and that’s what pretty much why the first book centers on one planet and one character. But as I wrote I realized that I wanted to explore questions of philosophy and evolution and where human beings are placed in the universe. So as I wrote, the layers grew. It kind of started with a particular idea and turned into a sweeping social, philosophical and political drama.

Which one of your books would you love to see adapted as a featured film and why? I would love to see Nylon Angel my first novel from the Parrish Plessis series, because is a great action-adventure and I have had quite a lot interest over the years to start developing this into a film. Sadly, no one has ever had the finance to sign on the dotted line. Also my novel Burn Bright is extremely filmic and topical because it is creepy, paranormal fantasy … and I also can see a potential for The Peacemaker in time as well.

However, my inspiration for writing over the years comes from many different writers. Carlos Castaneda had a big influence in me when I was in my late twenties, and in my forties it was Octavia E. Butler, an African-American Science Fiction writer who was a genius but sadly passed away a couple of years ago. Tell us about your alter ego Marianne Delacourt. Marianne Delacourt is the person who writes the Tara Sharp series. The 2 books that I have out are called Sharp Shooter and Sharp Turn and the 2 upcoming novels are Too Sharp! and Sharp Edge.  Having an alter ego has allowed me to write in a different style, and to write humour; to move away from kind of deep philosophical and sharp-edge stuff and actually just have a little bit of fun. I felt it was only right to signal my science-fiction readers that I was doing something different by changing my name. It’s great fun writing those books. It’s like having a holiday.

How long it takes you to write a book? It depends a lot. I mean, most authors will say that their first book takes around 7-12 years. I think, my first novel took me around 5 years to write, but once you learn the craft a little bit better, you get a lot quicker. Ideally it would be nice to write one book a year but it doesn’t always work out that way. These days it’s usually about 6 months per book.

How did you get involved with Supanova? It was a little bit of good luck in my part. Several years ago, I was in a convention in Brisbane and right after the convention Supanova was about to have their event. Sean Williams was supposed to be attending as a science-fiction author but he became unwell and he couldn’t attend, so I was invited to attend in his place. I’ve kind of stayed there ever since because I love it so much, and I love my Supanova family.

Your favourite celebrity or author you have ever met in Supanova or other convention? They are all really great! The thing that I love about Supanova, apart from the actual event, the fans and costumes, is that I get to meet creative people from other countries and I find it very stimulating. I always go away from Supanova feeling creatively motivated. I loved meeting Mary McDonnell, who plays the president in Battlestar Galactica, Leah Gibson from the Twilight movies and Charisma Carpenter from Buffy and Angel, and many voice actors and comic artists and writer. Paul Jenkins is another of my favourites. Really my list goes on and on…

Which one do you think is the best book you have ever written and why?
That’s hard! They are all your babies. Every single one feels like your own child… and every one is written at a different time in your life, when you are under different pressures. Book 4 of Sentients of Orion I wrote under huge amounts of health pressure. So it’s kind of special that I even finished it, and then won an award for it. Burn Bright is a book that I wrote over a period of 7 years, because I loved it so much even though I didn’t have a contract for it – but I really wanted to tell the story. And Nylon Angel is also special because it is my first novel … so it’s very hard to pick.

With Sentients of Orion did you always fee that it would be 4 books? Or did you think it it would just be just one? Sentients of Orion was always supposed to be 4 books. At one stage, I thought I might be able write the story in 3 books but my editor pointed out to me that it wasn’t going to work … so yes – 4 books since the beginning. However, Nylon Angel I wrote as one of book, but then the publishers ask me to write more and transform it into a series.

Any advice for future writers?

The industry is undergoing huge change. So the things that I advise you on now, might not be relevant over the next few years. But the key to any kind of writing is to make sure that you read, and that when you write, you must finish things. Many people think that they would like to write but they actually don’t read books. I have also met many writers with half-finished manuscripts. You can’t send half-manuscripts anywhere. Nobody wants to read half-finished manuscripts. As much it is difficult, when you are starting out, you need to focus on getting to the end of the story.

Also, be as much active as you can in your own literary community, get out and meet people and find out what is going on.

Thanks Marianne for all

In addition, don’t forget about Marianne’s latest project, ‘Peacemaker’ is out now.
Click here for more information about it