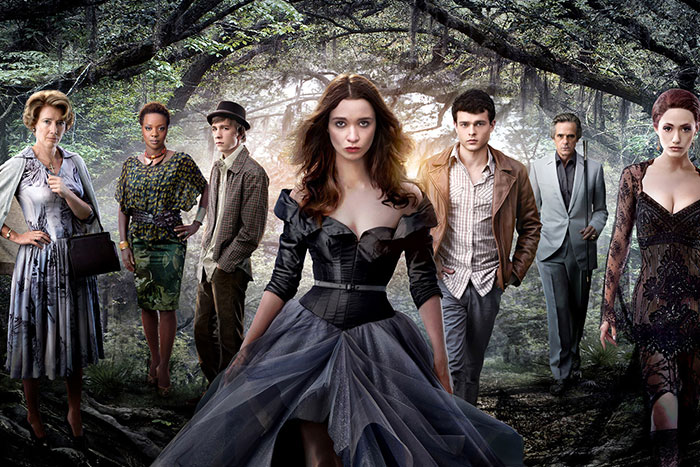 Thanks to Roadshow Films, we had the chance to see Richard LaGravenese’s Beautiful Creatures before its Australian cinematic release. This is our review of the film – but as usual – no matter what we say; we recommend that you still go to your local cinema and see the film because: There is no better critic than yourself! Beautiful Creatures is a romantic-supernatural story based on the adventures of Ethan (Alden Ehrenreich) a teenager wanting to leave his religious, conservative hometown in South Carolina and the dark story behind a new girl at school Lena (Alice Englert) whose family is cursed.

Ethan is instantly attracted to Lena’s quick wit at school as she defends herself against their conservative classmates. Lena, at the same time falls for Ethan who’s fascinaed by banned books. But Lena harbors a terrible secret: She is a Caster. Her family have sorcery powers both good and evil and to make matters worse, her family is hunted by a curse involving Ethan’s ancestors. Lena’s fate will be decided when she turns 16, exposing her true nature which only happens to the women in the family. Her mother Sarafine (Emma Thompson) and cousin Ridley (Emmy Rosum) are sirens thrown to the dark side of magic who will do everything to bring Lena onboard. Yet Lena’s uncle Macon Ravenwood (Jeremy Irons) represents the good side of the power, leading the life as an eccentric millionaire in his mansion far from the town (which he owns most of it) and tries to forbid Lena and Ethan’s romance for their own good.

The film is based on Kami Garcia & Margaret Stohl’s Caster Chronicles (2009) which does no justice to the novels as it is quite dull and does not explain the story of Macon Ravenwood or their family background. Great actors like Jeremy Irons and Emma Thompson shines no light for their characters, appearing rather silly instead. New actors like Alice Englert and Alden Ehrenreich do not look like they are in love at all as they have no on screen chemistry whatsoever.

Even though the director Richard LaGravenese attempts to create some realism in the film, all the magic and power look ridiculous on the screen. For example it’s hard to believe the powerful evil sirens could not fight Macon and Lena full frontal in the final battle, plus the library scenes in the end was long and meaningless where all the research did not stop the curse or decide Lena’s fate.

Overall, Beautiful Creatures is targeted at female teenagers to fill in their emptiness after Twilight saga ended, but the film can be quite entertaining sometimes thanks to certain special effects, set designs and minor comedy. So if you like romance, witchcraft and supernatural stories, this movie is down your alley….just don’t have too high of an expectation.

Beautiful Creatures is currently showing in cinemas around the country.