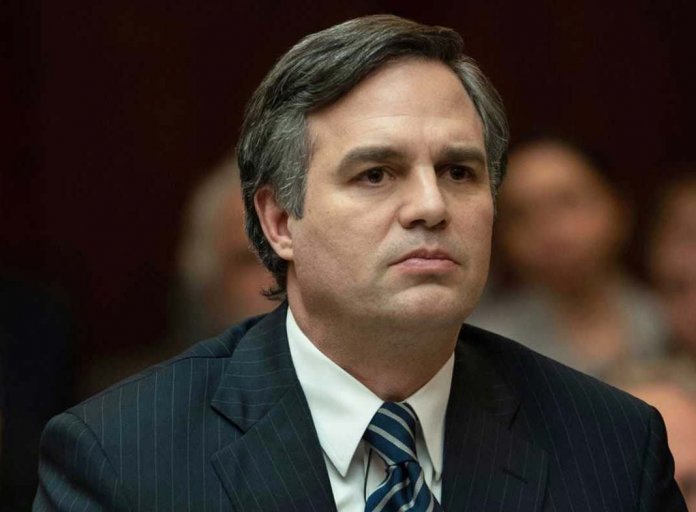 Film goers will be familiar with the little guy taking on the big corporation genre. We’ve seen it before in The Insider, A Civil Action and Erin Brockovich. We’ve also seen Mark Ruffalo lead a team of investigative journalists as they try to uncover the dirty deeds of the Catholic Church in Spotlight. So Dark Waters on initial trailer viewing has a very familiar feel to it, therefore it’s understandable that some audience-goers may not feel compelled to want to watch this movie. But if you can get past those initial hesitations, this film will bring a new sense of shock and awe that may potentially knock the wind out of you.

When corporate defence lawyer Robert Bilott (Ruffalo) is visited by Wilbur Tennant (Bill Camp) and asked to investigate the poisoning of the river that runs through Tennant’s farmland by the neighbouring DuPont chemical facility; Bilott initially wants to write him off as a bit of a quack. Initially reluctant to take on the case due to his firm’s connections with numerous large chemical corporations, even a cursory look over Tennant’s home-made video footage of his sickly cows stirs Bilott to pay a visit to the pastures. He comes to discover the presence of a chemical called PFOA-C8, something known as a “forever chemical” because once it gets into the human system it never breaks down and accumulates. This chemical is not only in the water supply but was used in many home products, including Teflon. And the more information Bilott uncovers, the bigger and more wide-reaching the case gets. 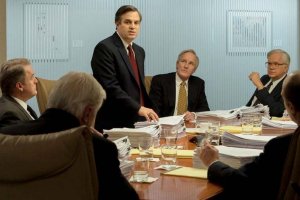 Based on Nathaniel Rich’s New York Times Magazine expose “The Lawyer Who Became DuPont’s Worst Nightmare” this adaptation directed by Todd Haynes takes a methodical look at how this story came to pass. The pacing of this 126 minute film at times feels slow, but that’s probably because so much of it reflects the painstaking piece by piece investigation. This isn’t a fast showy courtroom drama, this is one man taking on a massive corporation using the only thing at his disposal, the legal system. And as we all know, anything going through any sort of legal investigation takes time.

The screenplay Mario Correa and Matthew Michael Carnahan raises the question, why fight when the odds are stacked so far against you? The simple answer is because it’s the right thing to do. Even when the odds are so slim of getting justice for the individual, the need for a public service announcement is for the benefit of the wider community. The film has its usual and predictable peaks and troughs for a legal drama. It takes one odd misstep when it tries to become more like a corporate thriller in a very shoehorned scene involving Bilott fearfully starting his car ignition thinking there may be a bomb, but manages to course correct. 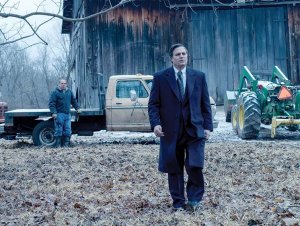 Ruffalo’s performance is quiet, understated and polite, rarely raising his voice. His initial curiosity in the case slowly evolves into an obsession as he exposes DuPont’s knowing conspiracy. His outrage is tempered but palpable, and reflects the audience’s own growing shock. Camp as the gruff and growly farmer under heavy bushy eyebrows delivers an electrically charged performance. Tim Robbins has a few shining moments as Tom Terp, the head of Billott’s firm, who takes on the case within reason. Whilst Victor Garber gets to embody the face of DuPont and provide us a villain to despise. Anne Hathaway as Sarah Bilott, the supportive wife, doesn’t quite have as much onscreen time to develop her. She treads a fine line of being the sounding board (Sarah gave up her own career in law to become a mother) but also struggling to maintain a semblance of a normal Christian family life with their three kids.

Most films of this ilk have a huge crescendo when our David beats Goliath, but here it’s a quiet phone call from the science panel confirming everything we’d already suspected. So just when you think our little guy is coming out on top, there’s the final crushing blow to be told that Dupont are going to challenge each individual case. It’s a sucker punch that almost knocks any remaining positive wind out of you as Ruffalo exasperates “The system is rigged”. Thankfully though Haynes ends the film with some closing text updates to try and reinstate that hope. It’s a movie that makes you both feel sick to the stomach but also want to stand up and fight.