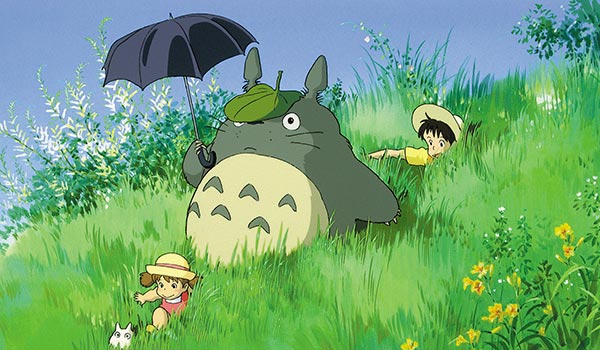 ACMI is thrilled to announce that from 24 August through to 25 September 2017 it will present a month-long film season devoted to celebrating the films of renowned Japanese animation studio, Studio Ghibli.

Celebrate! Studio Ghibli is a comprehensive program of 23 Studio Ghibli titles giving audiences the chance to delve into the beautifully realised worlds and uniquely imaginative storytelling of Studio Ghibli as well as uncover the life of the genius behind the studio, Hayao Miyazaki, in the poetic documentary, The Kingdom of Dreams and Madness (2014).

ACMI audiences can expect to see beloved family classics such as My Neighbour Totoro (1988), Ponyo (2008), Howl’s Moving Castle (2004) and the Academy Award® and Golden Bear winning Spirited Away (2001). ACMI also screens some of the studio’s most recent releases, the visually stunning The Tale of the Princess Kaguya (2013), the adventure driven The Wind Rises (2013) and the tale of curiosity and friendship When Marnie Was There (2014).

“That Studio Ghibli, its films, its filmmakers and its characters have endured across generations and cultures is reason enough to revisit your most loved characters and catch up with undiscovered gems from this Academy Award®-winning animation studio. At ACMI we urge audiences of all ages and tastes to experience the moving image and in the work of Studio Ghibli there’s considerable cause for celebration,” says James Hewison, ACMI’s Head of Film Programs.

Headed by animation legend Hayao Miyazaki, Studio Ghibli has proven time and time again that cel animation is still one of the most intricate and beautiful forms of animation. To do justice to the stunning works and highlight the visual quality of Studio Ghibli’s films, ACMI is screening many titles in their original 35mm.

Not only does the season feature the light-hearted adorableness of characters such as Ponyo, the Catbus and Totoro, ACMI will also screen films of a darker tone such as Grave of the Fireflies (1988). Tackling the relationships between people and time, technology and nature, Studio Ghibli has never been more relevant.

Alongside the Wallace & Gromit and Friends: The Magic of Aardman exhibition, Celebrate! Studio Ghibli allows ACMI to simultaneously showcase two of the greatest animation studios in the world. On his recent visit to Australia David Sproxton, Co-founder and Executive Chairman of Aardman commented on Studio Ghibli’s wide reaching audience. “Hugely imaginative, beautifully drawn Studio Ghibli films are a treat for young and old alike,” said Sproxton.

With many films screening in both English and Japanese with English subtitles, Celebrate! Studio Ghibli offers entertainment for the youngest audiences, those looking for something new, as well as the avid anime fan.

Celebrate! Studio Ghibli is screening at ACMI from 24 August to 25 September 2017. For tickets and information please visit acmi.net.au/ghibli.