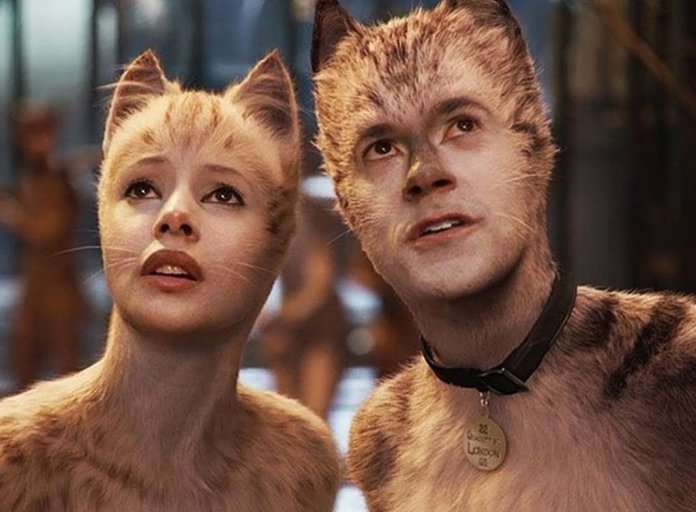 It’s easy to hate on a film after seeing a terrible trailer, wen the previews look so mortifying it’s obvious to then go into a film with low expectations. Or in this case, expecting it will be a terrible dumpster fire of a movie. For the uninitiated, Cats is an adaptation of the Andrew Lloyd Webber musical of the same name which in itself is also adapted from T.S. Eliot’s book of children’s poems titled Old Possum’s Book Of Practical Cats. Somewhere along the line Eliot’s poems have been twisted into a bizarre story that Webber concocted into a very successful musical theatre production. Which has now been made into a film because a studio executive thought “why not?” and here we are.

It can be very difficult to pin down what this story is about, but the simplistic explanation is that Jessica (Francesca Hayward), an abandoned cat, meets the gang of ‘Jellicle Cats’ who audition in front of Old Deuteronomy (Judi Dench) during the Jellicle Ball for a chance at a new life and to go to the Heaviside Layer, an ethereal take on heaven and reincarnation. Through the course of the film we meet the various ‘Jellicle Cats’, via our narrator Munkostrap (Robbie Fairchild) who guides Victoria (and the audience) through each of the various cats. There’s Jennyanydots (Rebel Wilson), the lazy tabby housecat, the cocky tom cat Rum Tum Tugger (Jason Derulo), the tap dancing railway cat Skimbleshanks (Steven McRae) and the tuxedoed cat Bustopher Jones (James Corden) who is a connoisseur of eating garbage. These are but a few of the characters, who make their song and dance in an attempt to win passage to the Heaviside Layer. The nefarious Macavity (Idris Elba) uses his magic to try and remove contestants for his own chance at a new life. But it’s the outcast Grizabella (Jennifer Hudson) and her emphatic performance of the song “Memory” that wins Deuteronomy’s favour. 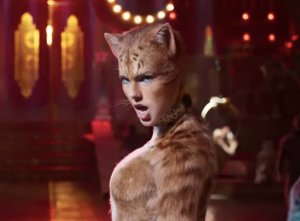 Tom Hooper’s direction along with the screenplay by Lee Hall is merely just trying to maintain a grip on the absurdity of this entire production. Having sanctioned the waking CGI nightmare that is the humanoid cat figures who prance and sway and sing their way through the 110 minute runtime. There are moments where cinematographer Christopher Ross manages to make the alternate universe bohemian London setting seem magical. And then there are moments that completely break your brain because that’s not how cat tails move and why do some cats wear clothes and others don’t and why is Rebel Wilson unzipping her fur skin to reveal more fur skin and a jeweled playsuit underneath? And how many cat puns can they put into this film?

The performances in this film vary from entrancing to questionable. Hayward, a principal ballerina with The Royal Ballet is our wide-eyed newcomer who is brimming with enthusiasm and kindness. Her dancing is mesmerizing at times, her body is lithe and flexes and bends in miraculous ways. Fellow dancer Steven McRae also shines as the tap-dancing railway cat who taps his way from their abandoned theatre to a first class railway car to the railway bridge and back again. Laurie Davidson’s Mister Mistoffelees is earnest and endearing in his awkwardness. Hudson’s performance of “Memory” is spine-tinglingly good, and it is a shame we don’t get to find out more about her character.

But then there’s Elba’s villainous Macavity whose motives are never really made clear. And while a big deal was made over Taylor Swift’s casting as Bombalurina, she’s only onscreen for a singular song as Macavity’s sneaky offsider who drugs the Jellicle’s on catnip. Hers is so underwhelming and forgettable and pointless that it could have been removed, since Macavity seems to be able to magically teleport his prey at will anyway. I’m also aghast that Sir Ian McKellen is forced to stoop as low as meowing, and licking out of a dish. There is no justification for such torture of a thespian of his calibre.

This film adaptation of a musical is also exhausting in that there is little to no between song banter. As the movie progresses its thin narrative we slip from song and dance into song and dance into the next song and dance number. There’s hardly room to breathe when your ears are trying to keep up with the nonsensical lyrics of most of the songs. Which is compounded by the assault on your eyes by the proportions and scaling being inconsistent throughout. The cats look tiny compared to some of the sets, and then all of a sudden they are in a setting that feels like re-sized dimensions to match the actors.

Cats is a baffling attempt at turning a bizarre ethereal musical into a more coherent film however it fails dismally in almost every regard. The performances by a couple of the dancers-come-actors are an ardent attempt at taking this all too freakish artwork seriously. But the name stars seem all too comfortable with phoning it in. If the films aim was to make you come away asking more questions than can possibly be answered, then it’s a roaring success.