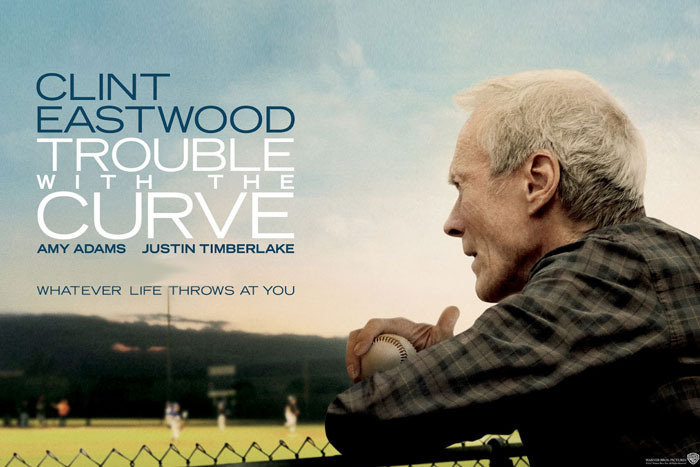 By The Madrina Thanks to Roadshow Films, we had the chance to see Clint Eastwood’s Trouble with the Curve before its Australian cinematic release. This is our review of the film – but as usual – no matter what we say; we recommend that you still go to your local cinema and see the film because: There is no better critic than yourself!

Directed by Robert Lorenz, the film revolves around an ailing baseball scout Gus Lobel (Clint Eastwood) who, against his wishes, takes his daughter Mickey (Amy Adams) along for possibly his last recruiting trip. Impeded by vision problems which his bosses are not aware of, Mickey volunteers to help to scout a top new prospect together, in hope to re-prove her dad’s worth to the organization. Along the way, Gus reconnects with a rival team’s scout Johnny (Justin Timberlake) whom Gus once scouted as a baseball player, now also wanting to assist him whilst falling for Mickey. Eastwood’s first acting project since Gran Torino (2008) and first role in a film he did not direct since In The Line of Fire (1993), this film shows that this veteran actor is a natural at nailing his mentor or guardian type of roles (e.g Gran Torino Million Dollar Baby). Playing a grumpy old man as usual, it takes a sweet patient antagonist, in this case his daughter to shed his layers and bring out a gentle spirit. Yet, though Adams and Eastwood do share a great chemistry as father and daughter, we find their inter-action too refined at times, making their bonding appear a little mechanical and rigid.

Now we always wonder Justin Timberlake’s involvement in every film but he seems more grounded and mature in Trouble as Mickey’s love interest, which at least ticks romance off the list for this movie. On the other hand, we really like John Goodman’s character Pete who’s stuck between a rock and a hard place as Gus boss and friend.

Being a sports-drama film, the plot can be predictable and formulaic (think ‘underdog coming through) especially when a popular one like baseball has been done to death like in League of Their Own (Madonna), Money Ball (Brad Pitt), For The Love of The Game (Kevin Costner) or Bang The Drum Slowly (Robert Deniro). So Clint is not the only big name to grace this genre but his late focus on human interest films (Mystic River, J.Edgar) and his success in sporting films (Invictus etc) are reason enough for us to watch this movie, as he can always turn something ordinary into extraordinary. Overall, Trouble with the Curve is a good film about a man wanting second chances in his twilight years, not only for his career but family, friends and social circles. You will be moved by the father-and-daughter bonding experience, whilst enjoying some laughs along the way at the contrast of personalities and ironies of the past-present.

Though you won’t be seeing Clint carrying a gun or driving a Grand Torino, he’s just as powerful with a bat, carrying on even in poor vision in his typical manly swagger!

Eastwood is back in the game, baby!

Trouble with the Curve opens in cinemas on 6 December, 2012.