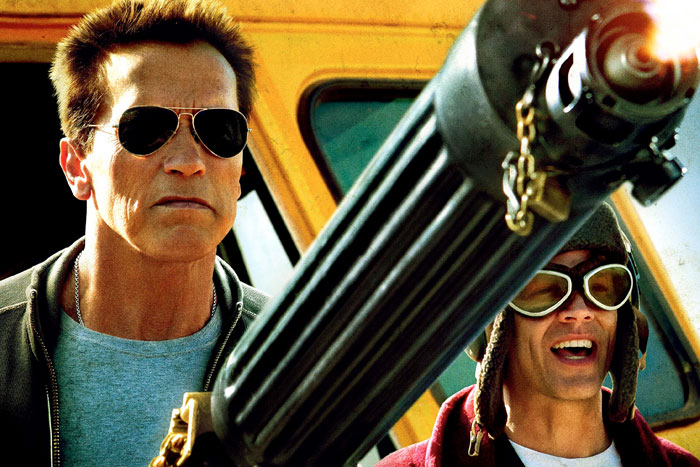 By Rockstar & The Walking Said
Thanks to Roadshow Films, we had the chance to see The Last Stand before its Australian cinematic release. This is our review of the film – but as usual – no matter what we say, we recommend that you still go to your local cinema and see the film because: There is no better critic than yourself! The Last Stand marks the American debut of the Korean director Jee-woon Kim (Doomsday Book and The Univited), who delivers a half-dozen quality kills that will leave you squirming and then laughing at the sheer boldness of it all. With all the high-speed car chases and ear-shattering explosions, perhaps the most exciting and tense scene features two high-powered cars playing a game of cat and mouse while slowly rolling through a cornfield. Schwarzenegger stars as ex-big city cop Ray Owens, now living the quiet life as sheriff of the Arizona border town of Sommerton, who suddenly finds himself in the path of a notorious drug cartel boss Gabriel Cortez (Eduardo Noriega) making a break for the border. Resolving to do defending his town with very little backup and enlisting a group of inexperienced deputies (which includes Johnny Knoxville); he forms a line of resistance while a powerless FBI watches from afar. The sporadic humour works especially well, relieving moments of high tension and violence with a sense of the ridiculous. The diversity of the cast is also a plus with the likes of Forest Whitaker as the intense FBI agent chasing Cortez and Luis Guzman as the Sheriff’s comical deputy. Rodrigo Santoro plays a charming scoundrel called Frank Martinez, locked up for disorderly conduct and whose former squeeze Sarah (Jaimie Alexander) is the police officer in charge.

But as comebacks go, Schwarzenegger has chosen a really good vehicle with which to remind people of how he became so popular in the first place. And while there are several jokes to acknowledge his age, the big man doesn’t shirk from the physical demands of the role and still knows how to deliver a crowd-pleasing spectacle.

The Last Stand opens in Australia on the 21st of February 2013.