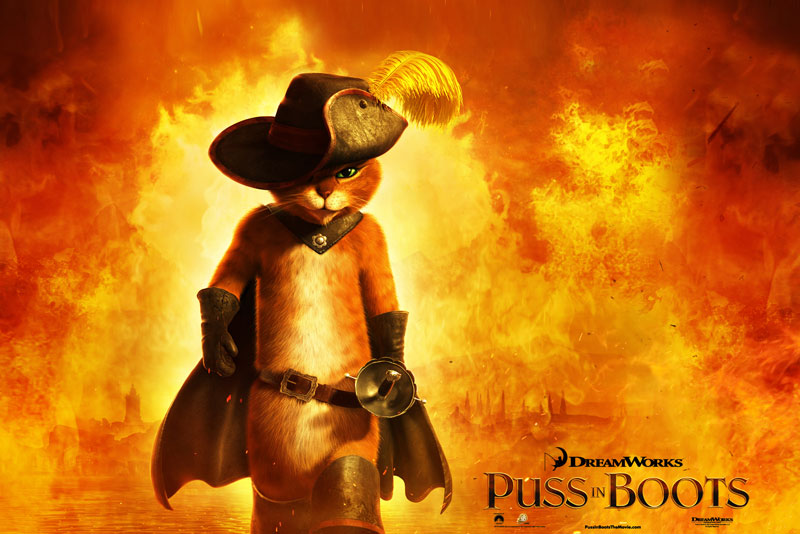 Thanks to Paramount Pictures, we saw the highly anticipated ‘Puss in Boots’. This is our review of the film – but as usual – no matter what we say; we recommend that you still go to your local cinema and see the film because: There is no better critic than yourself!

Directed by Chris Miller (Shrek the Third), ‘Puss in Boots’ is the spinoff-prequel of the Shrek trilogy, focusing in the story and origins of the cute and intrepid Cat, known as ‘Puss in Boots’ (Voiced by Antonio Banderas).

In his own adventure Puss is seeking the magic beans (yep, the same ones from the classic tale ‘Jack and the Beanstalk’) which are in possession of the evil Jack (Billy Bob Thornton) and Jill (Amy Sedaris). Along the way, Puss crosses path with an old friend he used to call “brother”,  Humpty Dumpty, the Egg (Zach Galifianakis), who betrayed Puss costing him his honour and forcing him to leave his “mama” and his town.  But that is not all, as Puss also meets the very attractive, Kitty Softpaws (Salma Hayek) and as a tomcat (literally) he tries to seduce her with his unique charm.

The three of them, joins forces to get the beans and climb to the castle in the sky, in order to find the mystical creature that is able to give birth to golden eggs which will recover their honour. When they come back to their town with enough gold, they will be considered heroes.

‘Puss in Boots’ is a fun and clever story. The script is simple, going along similar the lines of the Shrek movies, with tons of jokes and easy-to-follow plot perfect for kids and adults. The animation is just outstanding as the 3D works as it should work in most of the movie. The film is so entertaining, that you don’t even notice when an hour and a half is over, as you just want more and more adventures from Puss.

The voice work is good as usual, with a great Antonio Banderas, perfect choice for the role of Puss, transferring his unique ‘Latin-lover’ voice style to the character all the way. In addition Salma Hayek, is also a great alternative for Puss love interest Kitty, thanks to her Latin background as well and her amazing acting skills. Moreover, both of the characters, are complemented by the always funny (well sometimes annoying, but not in this case) Zach Galifianakis as Humpty Dumpty, who actually kind of mind of him with his facial expressions.

The comedy is the focus of the film, and is very well done, with so much attention to detail in terms of the Cat’s movements and jokes, such as in the “Dance Fight” (as seen in previous featurettes) or even in the way Puss drinks milk, which is funny and cute at the same time. Furthermore, in case you are wondering, Puss does flash his classic cute eye looks, which captivated everyone in Shrek 2. Another great element of the film is the absence of unnecessary characters, like in the last Shrek film, as the core here is just the “three amigos” (Puss, Kitty and Humpty). All  the other characters are on screen with just enough time to play their part across.

‘Puss in Boots’, is easily one of the best movies of the year – quick, clever, well done and extremely funny. You fall in love with the characters in seconds, especially if you are a cat lover, making the film a must see for everyone.  The little ones at home will surely ask to get a cat as a pet after seeing the movie.