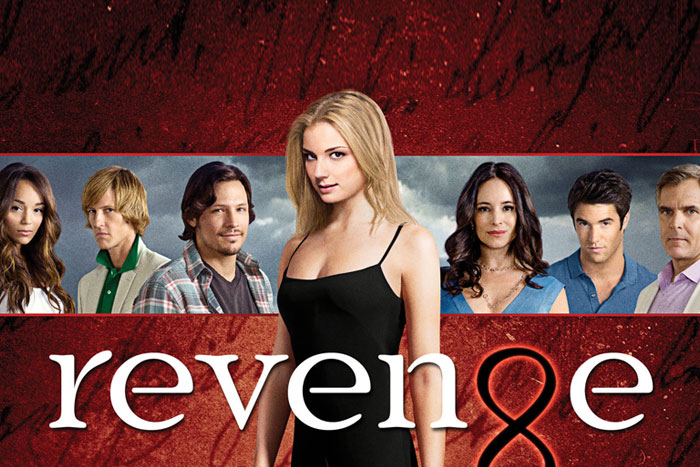 By Wanda
Murder, mayhem, guilty pleasures… follow the intriguing story of retribution of Amanda Clarke as the first season of REVENGE comes to DVD. Written and Produced by Mike Kelley (O.C and Jericho), Revenge centres on a young woman who is welcomed into a community filled with people who don’t know she is there to exact revenge on the people who destroyed her family. Amanda Clarke (Emily Vancamp) was only a child when her father was taken from her and arrested for a terrorist act, which he didn’t commit. After many years later, Amanda learns the truth and plots to exact revenge by disguising herself as a young Heiress by the name of Emily Thorn. Revenge is loosely based on “The Count of Monte Cristo”, but pre-revolutionary France is traded for present day luxurious lifestyle of the rich and famous within the Hamptons. Emily Thorn moves back into her childhood home to set her plan for vengeance into action against her neighbours Victoria (Madeleine Stowe) and Conrad (Henry Czerny) Grayson has per primary target by romancing their son Daniel (Joshua Bowman).

Emily Vancamp does a fantastic job at portraying her character very well, and makes it clear within every episode that she is a very strong-willed woman who will not back down at the slightest bit of struggle. Her every action and decision within every episode is fuelled with revenge. This is very rare in a TV show for a female to be portrayed with such confidence, and is very refreshing to see. You cannot help but feel a little guilty pleasure as you follow her along and secretly encouraging her.

Meanwhile Madeleine Stowe character has a spine of iron, and a quick tongue that is ready to fire at anyone who dares to betray her. Anyone who dares to wrong her character, she quickly goes in for the kill to public humiliate them in the most artful way while still maintain a pleasant smile and continuing to rule the Hamptons with an iron fist. She plays this character in such an extraordinary way, that you are unsure whether you should hate this character for what she has done to Amanda or whether to love her for the fact she can maintain composure within every situation. Revenge is fantastically well written, as each episode has so many hidden agendas, plot twists and turns and that it will constantly keep you on the edge of your seat and eyes glued to the screen making you speculate what will happen next. With special guests like James Purefoy (Rome) and John Billingsley (True Blood), keeps you highly entertained and keeps you constantly guessing.

With additional material available on DVD, get a firsthand look at the story behind Revenge, and see why this show has become an instantaneous hit.