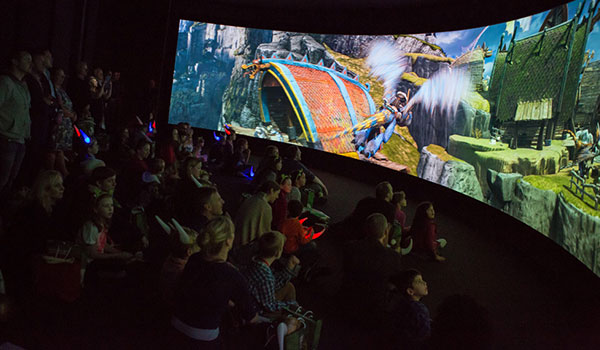 Due to popular demand, the Australian Centre for the Moving Image (ACMI) will extend the season of its blockbuster Melbourne Winter Masterpieces experience, DreamWorks Animation: The Exhibition, by three weeks. Over 150,000 visitors from all over the world have enjoyed the extensive behind-the-scenes display of the artistry behind the studios much loved animated films.

DreamWorks Animation: The Exhibition, ACMI’s largest ever exhibition, features over 400 items including, never-before-seen concept drawings, interviews, models and original artworks, and interactive experiences to entertain both children and adults.

Charting the creative journey of a DreamWorks Animation film from the first idea sketched on a Post-It note, through to the final completed project, the exhibition includes everything from storyboards, to interactive animation software, to creative reconstructions of DreamWorks’ real-life workspaces and newly commissioned immersive and interactive environments.

Shrek, How to Train Your Dragon, Madagascar and Kung Fu Panda, along with early hand-drawn and hybrid 2D and 3D animations, such as The Prince of Egypt (1998) and Spirit: Stallion of the Cimarron (2002). The entire back catalogue of 29 DreamWorks Animation feature films is represented in the exhibition, including The Croods (2013), and the most recent theatrical release, Mr. Peabody & Sherman (2014).

From ACMI’s Flinders Street facade, penguins Skipper and Private smile and wave at passers-by, while their Madagascar costar, a 5.5 towering metre high giraffe, Melman, peers curiously through the window of the ACMI Lightwell. The star of How to Train Your Dragon, Toothless the Dragon, soars high above, welcoming visitors ahead of their exhibition experience.


A highlight of the exhibition is Dragon Flight: a Dragon’s-Eye View of Berk, a spectacular, 180-degree environment offering never-before-seen vision of Berk, the Viking township from How to Train Your Dragon. Dragon Flight takes visitors on an exhilarating panoramic dragon ride on the back of Toothless, as the Isle of Berk builds around them.

Completing the exhibition experience is a dedicated drawing room where visitors learn the basic principles of animation to create their own animations using a simplified version of DreamWorks’ own software.

ACMI has extended screenings of DreamWorks Animation’s most loved titles, with their latest hit How to Train Your Dragon 2, screening on the closing weekend, alongside an extended series of public and education programs.

Curated by ACMI in collaboration with DreamWorks Animation, the exhibition brings together Melbourne-based curators and creatives, and the animators, artists and producers of a major international studio for the first time. The exhibition, presented as part of the Victorian Government’s Melbourne Winter Masterpieces, will then tour internationally.

DreamWorks Animation: The Exhibition has been extended to Sunday 26 October. Tickets for the extended season will go on sale at on Thursday 21 August 2014. For tickets and information, please visit acmi.net.au/dreamworks