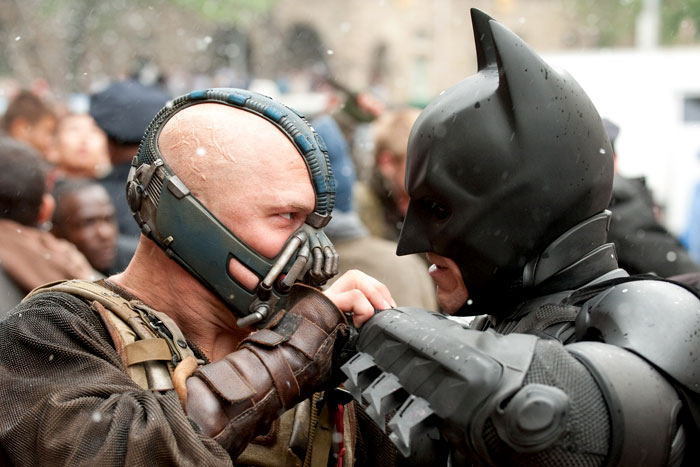 Finally we had the chance to see Christopher Nolan‘s The Dark Knight Rises, and let us tell you it’s hard to review such a flawless film without spoilers, but we will try our best! The Dark Knight Rises is the perfect follow-up to The Dark Knight, showing a Gotham City without Batman, who as you might remember took the blame for Harvey Dent’s death to create a symbol for the city, making Bruce Wayne disappear from the spotlight for long time, leaving behind Wayne Enterprises. On the other hand, crime rates have dropped thanks to commissioner Gordon (Gary Oldman), the police force and young cops like Officer Blake (Joseph Gordon-Levitt). However, it all ends when a huge menace of anarchy including an atomic bomb by a masked mercenary called Bane (Tom Hardy) arrives, forcing the retired Dark Knight to return from the shadows to save Gotham again and find his true destiny. Yet this time Batman is not alone, as an enigmatic and gorgeous thief known as Catwoman (Anne Hathaway) will cross path with him for good or for bad.

The plot uses some references from the all time classic Batman comics such as ‘Dark Knight Returns’, ‘No Mans Land’ and an obligatory one like ‘Knightfall’. They are taken with such a good care by Jonathan Nolan, David S. Goyer and Christopher Nolan that you feel their presence in every scene, despite the realistic take on the saga. Christopher Nolan is back to close his epic Batman trilogy with The Dark Knight Rises which excels in every way, making a bigger impact than the marvelous The Dark Knight, despite the fact that Tom Hardy‘s performance as Bane is not as spectacular as Heath Ledger‘s (he left some big shoes to fill but Hardy is still fantastic and iconic, taking on a complicated and beloved nemesis realistically like Nolan’s signature style) The movie also  features an iconic scene from the comic books, showing a perfect balance of brutality and intellect in Bane’s character, making us forget the horrendous Bane created by Joel Schumacher in Batman and Robin. Perhaps the only let done is that it is a bit hard to understand what Bane says some times (seriously who cares…IT’S BANE!) and he doesn’t need to inject venom to kick Batman’s ass…just mind and muscle will do the work! The film does not neglect the human factor which many other super hero films do with strong human relations in a city full of chaos that can even make you emotional at some stages, especially the scenes between Alfred (Michael Caine) and Bruce Wayne (Christian Bale). Moreover, this film is more about the path of Bruce Wayne than Batman because as the title says, it is a way to make the retired playboy rise up back again that Gotham needs, and in that aspect Bale did his best job to date as Batman and Bruce. Furthermore, casting 2 female characters in the movie creates a bit of romantic tension (Catwoman and an entrepreneur named Miranda played by Marion Cotillard) which could be a risky move but the script is so well written that you hardly notice it. It even makes the film more interesting, especially if we have a cleverly designed Catwoman/Selyna Kyle (Anne Hathaway) in such a realistic way that we don’t reminisce Michelle Pfeiffer’s performance at all in Tim Burton‘s Batman Returns (Though both takes on Catwoman are quite similar, it would be unfair to compare two vastly different version – one comic, one realistic)

Marion Cotillard‘s Miranda, on the other hand, seems to be a character to enrich the plot by assisting Wayne’s business at the beginning, but you would never imagine what happens later on (we won`t spoil it for you!). Moreover, this is a film with a lot of plot twists so be ready to expect the unexpected because it may be risky but it works perfectly! In addition, Officer Blake’s character (Joseph Gordon-Levitt) needs special attention (and we won’t go on about how talented he is) as he is in many key scenes, taking us to another HUGE plot twist in the end which will surely stun you and perhaps make you quite emotional (we surely did!)

The action and special effects are world-class as usual with stunning cinematography and art direction and don’t forget after all, this is an action film so expect lots of explosions, physical combats and classic bat-gadgets created by Mr. Fox (Morgan Freeman) including Batman’s new toy ‘The Bat’ (a combination of plane and helicopter). Also speaking about action and emotion, Batman’s first appearance in the film is simply poetic, giving you goose bumps thanks to superb soundtrack by music genius Hans Zimmer, who’s back on Nolan’s team to work his magic and creating an iconic score for every Bane scene. The Dark Knight Rises lasts for almost 3 hours and for the first time in many years, it feels like the length was perfect to close Nolan’s trilogy. The first forty five minutes has a lot of information to digest in order to take you on an emotional journey packed with action which makes this film an instant hit. It is a total masterpiece to us, possibly the best film of the year (so far), even making the impossible possible by defeating The Avengers in a very close competition (even though we don’t like to compare different superhero films)

The Dark Knight Rises is a must watch, especially if you have the chance see it in Imax as it’s a spectacular cinematic monster, worth every cent to see it again and again and again!

The Dark Knight Rises is now showing in Australian cinemas