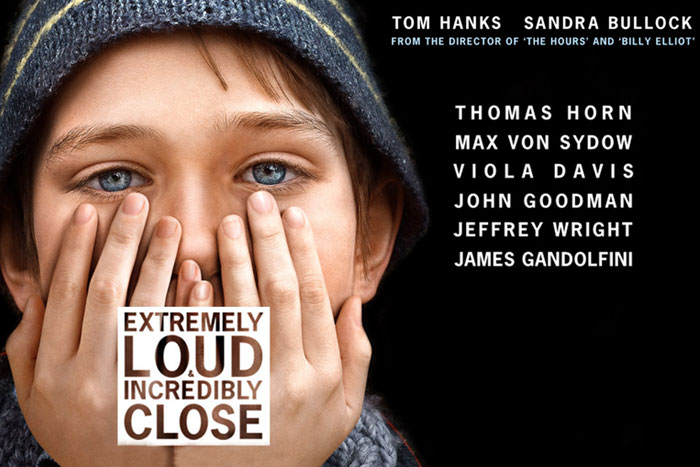 Thanks to Roadshow Films, we had the chance to see Stephen Daldry’s Extremely Loud and Incredibly Close before its Australian cinematic release. This is our review of the film – but as usual – no matter what we say; we recommend that you still go to your local cinema and see the film because: There is no better critic than yourself!

Based on the 9/11 novel from Jonathan Safran Foer, Extremely Loud and Incredibly Close, tells the story of Oskar Schell (Thomas Horn), a kid very close to his father Thomas Schell (Tom Hanks) who spends his time preparing hunting game for his kid in the city, using this adventures to help Oskar get over his social awkwardness.

Oskar suffers a big shock when he finds out that his beloved dad died at the 9/11 attack, feeling all the world crashing down, especially due to his difficulty in relating to his mother (Sandra Bullock). While looking through his father’s closet, Oskar found a key hidden in a blue cupboard, inside an envelope simply marked with the word ‘Black’. This triggers the kid to think his dad left him an expedition, making him systematically visit every person whose surname is Black in the phonebook – a long and difficult task for a kid afraid to use public transport. Along the way, he discovers and shares hundreds of stories, particularly one related to his grandmother’s new and mysterious tenant (Max Von Sydow).

Extremely Loud and Incredibly Close is a difficult film to review as it is related to the horrible 9/11 attacks through the eyes of a kid. The more you know Oskar who tries to comprehend the incomprehensible, the more you feel his pain, understand his ridiculous behaviour and anger, thanks to a great performance by the newcomer actor Thomas Horn.

Tom Hanks and Sandra Bullock on the other hand are actually passive characters with little time on-screen, leaving all the weight of the movie to Horn, which is a very risky move by the director and writers, putting 2 Oscar winners in a secondary place (a formula that really works!) However, Max Von Sydow’s character grabs the audience attention the most as he plays an old guy who cannot speak, using his hands and a pen/paper to communicate with the world, especially Oskar after joining him in his adventure.

Extremely Loud and Incredibly Close, is a serious drama that might or might not touch your heart with hardly any comedy moments, and moves along very slow, making you feel that the main story is lost amongst the sub plots. But it is a film that reinforces old values, like father and son love, using 9/11 as a background to tell this sad yet hopeful story.