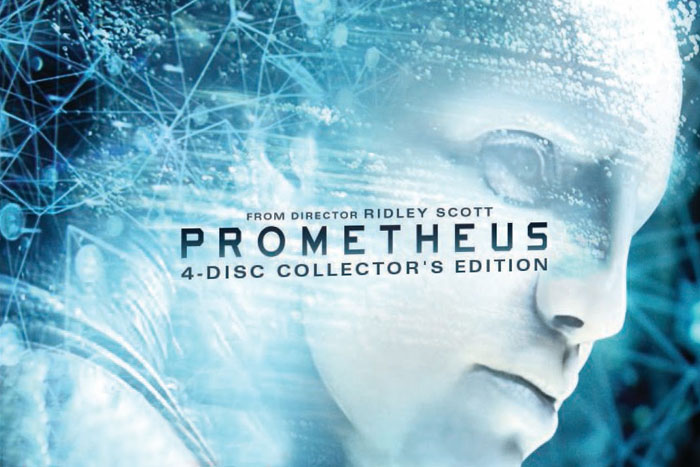 Thanks to Fox Home Entertainment Australia, we had the chance to immerse ourselves in the marvellous world of Ridley Scott‘s Prometheus on its 4 Disc Collector’s Edition on Blu-Ray.

Prometheus , as you might know is Ridley Scott’s come back to the Sci-fi world (check our review for the film here), in order to tell the origins of Alien (well sort-of) and the human race, following the story of a team of explorers after the discovery of a clue to the origins of mankind on Earth, reason enough for them to travel to outer space to find some answers. However, they find more than explanations to their questions on a trip that seems to be only a one way ticket. Prometheus  4 Disc Collector’s Edition, is a release full of extras with almost 7 hours of content, with the first disc including the film, The Peter Weyland files and a fantastic extended opening scene with the engineers and the origin of life, plus some other deleted scenes that will surely amaze you. However, the biggest asset of this release is the special features disc, which includes The Furious Gods: Making Prometheus , what we see as a bible on how to create a science fiction movie. In it includes a step by step account on the making of the film, from the very first scripts to the final product, making us want to visit the full live scale set, which was totally built and mostly without CGI or Green screens. This will surely impress every single viewer as the amount of care and detail involved in it is awe inspiring. Another highlight of The Furious Gods: Making Prometheus is the design and art process, with tons of sketches and final artworks for the film, including an epic moment that will drive every single Alien fan crazy, because HR Giger himself is shown visiting the art department, giving some ideas and even drawing some quick sketches to help his old pal Ridley Scott. Furthermore, there is so much stuff on The Furious Gods: Making Prometheus that you won`t even notice that almost 3 hours have passed since you started watching it, because the amount of detail and the content including: art, photography, stunts, special effects, pre and post production, etc., will glue you to the tv.

The Special Features disc also includes the Enhancement Pods that goes for almost 60 minutes , delving deeper into some topics such as The language of the Gods. This disc also includes a marketing gallery with all the posters created for the film, even the ones that did not see the light of day, plus Trailers, TV-Spots, Promotional Featurettes, and HBO First Look: Prometheus.

Overall, Prometheus 4 Disc Collector’s Edition is a complete set that includes the 3D, Digital Copy and Theatrical cut of the film that its worth to get especially for the special features disc in order to see The Furious Gods: Making Prometheus documentary, where perhaps many questions will be answered or many new ones will be opened and that’s the magic of this film!