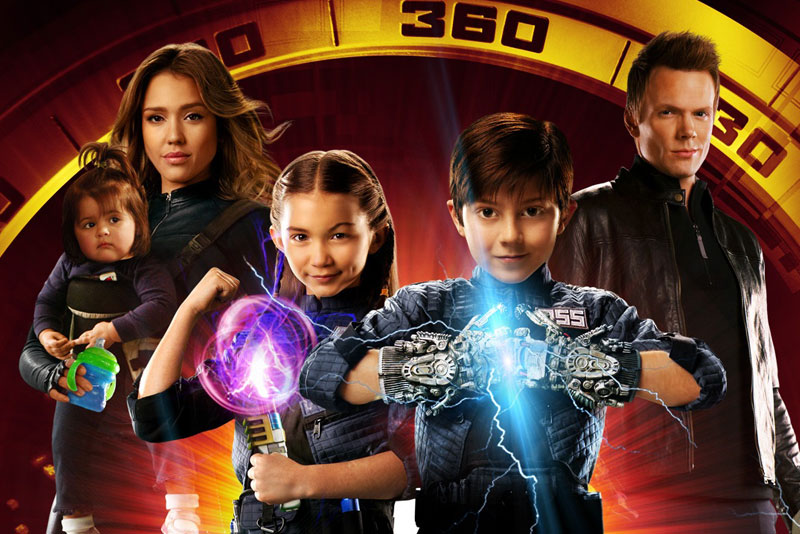 Thanks to Roadshow films, we had the chance to see Robert Rodriguez’ new cinema experiment ‘Spy Kids 4: All the Time in the World’ in 4D, before its Australian cinematic release. This is our review of the film – but as usual – no matter what we say; we recommend that you still go to your local cinema and see the film because: There is no better critic than yourself!

The movie tells the story of 2 kids (Rowan Blanchard and Mason Cook)becoming spies after their dad (Joel McHale) married a super spy named Marissa (Jessica Alba). Marissa, who left her career after giving birth, was called again by her former boss Jeremy Piven (Entourage). Piven is the head of the Spy organization requested her to work again because an old enemy, “Tick Tock” is joining a huge villain called “The Time Keeper” and they are ready to stop all the clocks and obviously control the time in the world for his benefit. In their adventure, the kids will have the help of a robot talking dog (voiced by Ricky Gervais) a kind of super dog, full of weapons and perhaps one of the few characters that you won`t hate the entire time.

Robert Rodriguez is back with the Spy Kids franchise, and this time with the 4D element: The Aroma-Scope card, in an attempt to change the way of seeing movies, giving you the sensation of smell the same as the actors.However this innovative tool fails to work most of the time.

The functionality is meant to be simple, you get an “Aroma Scope” Card with 8 numbers when you go to the movie, and as soon as the numbers appear on screen you have to rub the correct number and smell it. It is confusing thing for the little ones, who at the screening where smelling their fingers and the card with a massive question mark in their faces, so parents had to helped them the entire time, missing out many times the scenes with 4D that are very quick to happen. Add to that, the aromas are extremely similar between each others, and even when a dog farts on screen, you get a smell of a candy o chewing gum, making no sense at all, transforming all this rubbing process a stressful and disappointing thing, making us think:  Where is James Cameron when you need him!?

In regards of the film, there is not much to say, the movie is terrible, slow, predictable since the very beginning and IT’S NOT FUNNY AT ALL! It is full of repetitive jokes and lame characters that seems looks like it were taken from the worst episodes of The Power Rangers, making the film extremely targeted for little kids – and when we say little, we mean it – and it’s hardly enjoyable for other ages. The main

Spy Kid, Rebecca, is annoying as hell, she is a smart ass little brat that loves to do jokes (yes we got that the first 30 min of repetitive jokes, why do you keep going on with it in the movie!).  You want to punch her on the face after the first minutes, seriously. The other kid, Cecil is ok, and at least you can survive watching him on the film. Even the always great and funny, Jeremy Piven looks lame, despite his knowing capabilities. He falls in a horrible and cartoony plot as well as the rest of the cast. After reading this, if you are thinking …“please don’t make the baby do something” in the film…we can only say: EPIC FAIL!

Maybe the only good thing on this film is the 3D which actually works well in some scenes and the quote of nostalgia when the main characters of the previous films (Alexa Vega and Daryl Sabara) briefly appeared in adult form in the movie, as mentors and Spy kids legends.

There were a lot of curiosity about this film due to the 4D experience, which was one of the reasons we went to see it, a decision that we will be regretting every day of our lives.

Spy Kids 4D, is a new Hollywood experiment, with a horrendous result, hopefully the last film of the saga and not the beginning of a new trilogy.

SPY KIDS 4 in 3D – In Cinemas These School Holidays