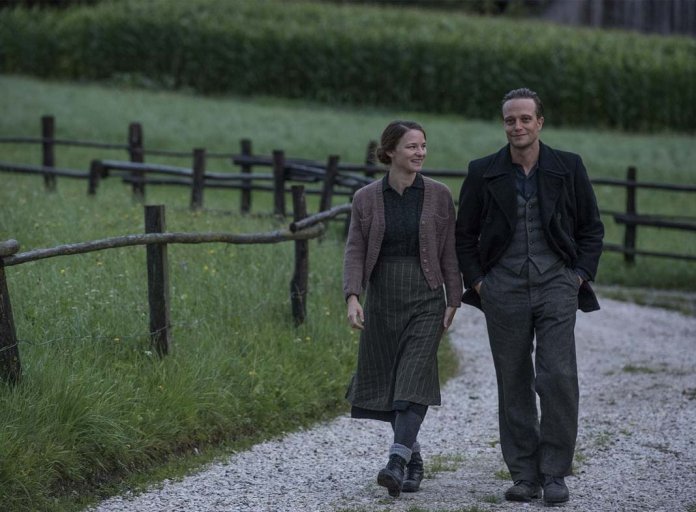 A Hidden Life, directed by Terrence Malick, is the true story of Franz Jägerstätter, an Austrian conscientious objector during the Second World War.

When the war breaks out, Franz (August Diehl) is working as a farmer with his wife Fani (Valerie Pachner) in the small Austrian village of St. Radegund when he is conscripted. Hearing about the atrocities committed by the Nazis, and thinking their invasions of other countries unjust, he refuses to pledge an oath of loyalty to Hitler. He’s immediately arrested.

He is berated by people on both sides of his moral position; those who agree say he’s throwing his life away for something that won’t make a difference and those who disagree accuse him of betraying his country. It’s very hard to disagree with the former argument, and throughout the film you are left hoping he’ll just give in to escape the utterly merciless wrath of the Nazis. 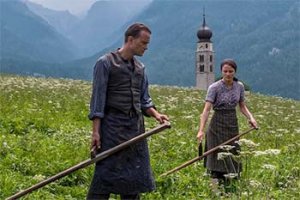 At nearly three hours in length it’d be relatively easy to tell this story in a much shorter format, but that’s not really how a Malick film works. With his style being something like a continuous montage, the film immerses you simultaneously in the vastness of its alpine locations and the minutiae of its characters’ lives. A fair amount of it is narrated with excerpts from the couple’s correspondence, giving it the feel of an extended trailer or advertisement, but in this case the product being sold is the humanity of the protagonists. Malick hasn’t succeeded at this much of late, but this time he really has. The film is profoundly affecting.

It doesn’t always work, and there are times an overly staged, artificial quality creeps into shots. The detachment is enhanced at times by shooting non-critical dialogue in German with no subtitles. However, the sheer beauty and vividness of Jörg Widmer‘s camerawork is so intense that you are overtaken by a sort of continuous awe.

This is not a film for everyone. Its style will be intensely polarising (there were a few walkouts in our screening) and the running time is sure to test some people’s patience. But, if you’re wanting a genuinely unique cinematic experience and something to think about, this is worth the effort.